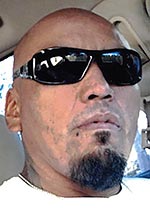 GALLUP — Funeral services for Emmett Cadman Jr., 43, will be held Friday, Jan. 18, at 10 a.m. at the Rollie Mortuary Chapel in Gallup. Burial will follow at the Gallup City Cemetery.

Emmett was born July 12, 1975, into the Naakai dine’é (Mexican Clan), born for Tódích’íi’nii (Bitter Water Clan). His nali is Kiyaa’áanii (Towering House); chei is Táchii’nii (Red Running Into the Water People). He passed away Jan. 9, 2019.

Emmett attended Gallup High School and was a well-known carpenter in Gallup and surrounding areas. He enjoyed steer riding and bull riding with the Indian Junior Rodeo Association, listening to music, artist drawing and spending time with family and friends. 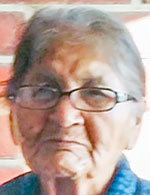 Lillie enjoyed cooking, gardening, tending to her sheep, being outdoors and was a dedicated weaver.

ST. MICHAELS, Ariz. — Funeral services for Milton Bluehouse Sr., 82, will be held today, Jan. 17, at 10 a.m. at the St. Michaels Catholic Mission Church in St. Michaels, Arizona. Viewing will take place one hour prior to service at 9 a.m. Burial will follow at the family plot.

Milton is preceded in death by his parents, Alice and Sam Bluehouse; sister, Roberta Bluehouse; and brother, Homer Bluehouse.

Milton attended Arizona State University, Northern Arizona University and served in the U.S. Army from 1959 to 1961.

Stanley served in the U.S. Navy during Vietnam and worked in the maintenance and transportation department for O.N.E.O., worked with St. Michaels and Oak Springs Head Start as a bus driver, and maintenance for Navajo Housing Authority.

Stanley did outdoor survival training and enjoyed camping, living the Diné way of life and taking care of his family.

A reception will take place at the Good Shepherd Mission in Fort Defiance, following service.

Lupita was born April 20, 1964, in Gallup, into the Kinlichii’nii (Red House People Clan), born for Táchii’nii (Red Running Into the Water People Clan). Her nali is Kinyaa’áanii (Towering House); chei is Honágháahnii (One-walks-around). She passed away Jan. 4, 2019, in Gallup.

Lupita is preceded in death by her mother, Mary R. Begay; and nephews, Sheldon C. Begay and Lester Johnson Jr.