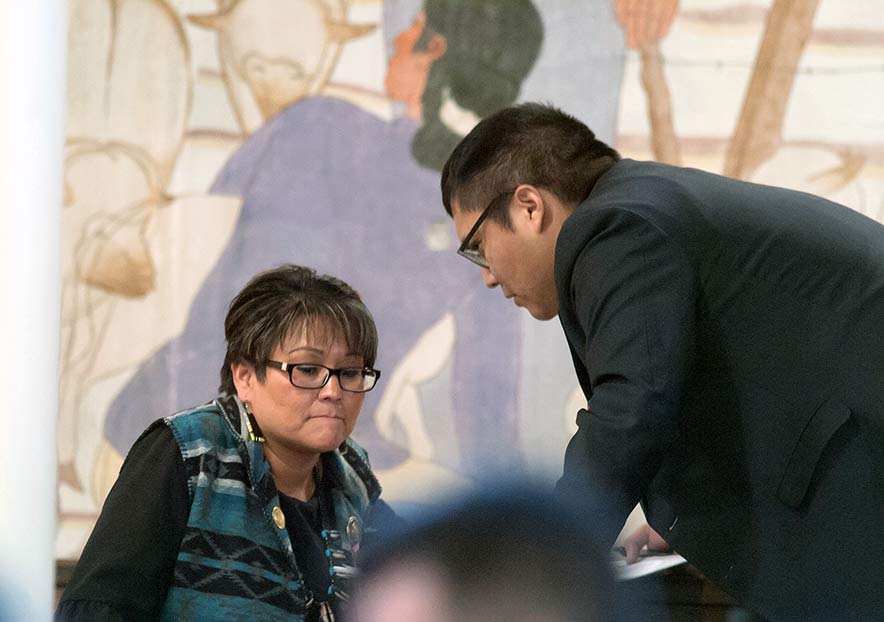 Navajo Transitional Energy Company and its recent actions are issues that are far from subsiding, as was evident during the first day of the Navajo Nation Council’s fall session Monday.

Law and Order Committee member Vince James introduced an emergency bill (No. 0319-19), which was added to the agenda by Council, to terminate NTEC’s general indemnity agreements.

In 2013, NTEC needed performance and reclamation bonds to purchase Navajo Mine, which was the reason for its creation. So in 2013 with a two-thirds vote, Council approved a limited waiver of the Nation’s sovereign immunity to be included in the agreements.

With NTEC’s recent purchase of the Cloud Peak Mines in Wyoming and Montana, the Council knows that NTEC wants financial backing on surety bonds for these mines and may seek the Nation’s limited consent to the NTEC general indemnity agreements. The emergency bill would prevent this from happening.

During President Jonathan Nez’s state of the Navajo Nation address, Delegate Eugenia Charles-Newton asked if he was aware of NTEC’s mine buys before they happened. She also gave a directive for Nez to provide a position statement on the emergency bill by the end of the day.

“I didn’t know about it until everybody knew about it,” replied Nez about the purchase. “I guess that’s embarrassing to say … as the leader of the Navajo Nation. But it’s true.”

He said after they found out about the purchase his office had a meeting with NTEC on Aug. 25 and he warned them the Council would question them.

Nez then asked if the NTEC shareholders knew about this purchase. Charles-Newton and Delegate Nathaniel Brown are both shareholders and have stated they, too, weren’t aware of the purchase until NTEC issued a press release.

Speaker Seth Damon said during a September Naabik’iyati meeting that he and Nez received a letter from NTEC on Aug. 19 about the purchase, the same day NTEC released the information to the public.

“I haven’t had the chance to really look at what the language is,” said Nez about the emergency bill. “I can’t say much to that legislation because it was just added onto the Council agenda today. We will listen to the debate on it.”

What is in question about the purchase is NTEC waiving its sovereign immunity, or protection from lawsuits, upon acquiring the coal mines from the bankrupt company.

All enterprises are required to inform the Navajo Nation when they waive their sovereign immunity, according to Navajo Nation Department of Justice attorney April Quinn, and NTEC never gave notice.

“In the enabling legislation it requires 10-day notice of the proposed transaction or agreement that would waive their sovereign immunity,” said Quinn in a previous meeting. “We give them to the speaker and the president. DOJ has reviewed the purchase agreement for Cloud Peak. There is a waiver of sovereign immunity in that agreement, and I don’t believe that notice was given to the Nation.”

Irked by Nez’s refusal to state a position, Charles-Newton raised the question of whether the Council could demand one.

“Can we get a written statement or position statement from the president’s office before the end of today, since he has his two top aides looking over the legislation?” asked Charles-Newton. “It’s important we understand where the executive branch stands … maybe even get the response by 5 o’clock tomorrow.”

Nez responded by saying he will listen to the debate and will give his position statement when and if this legislation is passed and moves on to his office for his consideration.

“Then we will consider all the pros and cons for the legislation that is set before this Council,” said Nez to Newton. “It doesn’t work the other way around. I don’t know the legislation and the debate that will take place prior. All I’m asking is for you to respect the authority of the executive branch.”