‘Diné understood’: Bearsun to return to Diné Bikéyah for Thanksgiving 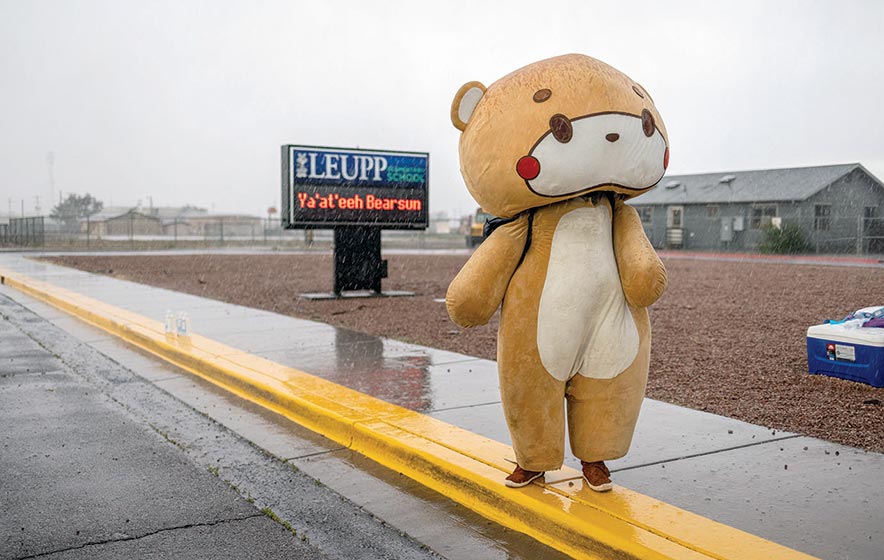 Special to the Times | Sharon Chischilly
Bearsun, who is Jessy Larios of Los Angeles, arrives in moccasins in Leupp, Ariz., during light showers on the evening of Aug. 15. Larios, as Bearsun, will return to Diné Bikéyah for Thanksgiving.

Bearsun, the teddy bear suit worn by 33-year-old Jessy Larios of Los Angeles, is returning to Diné Bikéyah for Thanksgiving.

No, he’s not walking back. He’s driving and revisiting some of the communities he walked through over the last four months. He’s calling the reverse course the “thank-you tour.”

This means he’ll be back in Cuba, Crownpoint, Window Rock, Ganado, Burnside, and in a few other Diné communities.

“Arriving at Times Square, that was extremely confusing because it didn’t feel like I finished,” Larios said in an interview with the Navajo Times on Sunday morning. “Everybody around me was super happy. But I didn’t understand.

“‘OK, I know I’m here,’” he said, “but mentally it doesn’t feel that way still and I was trying to get a reaction from myself.

“To me, it was, ‘You gotta keep going,’” he said. “But it was really nice to see everybody. Personally, for myself, I wasn’t done yet. Up until now, it still feels that way.”

The 3,000-plus-mile walk from LA to New York City took him 134 days. Larios started his long walk from Los Angeles’ Little Tokyo neighborhood on July 5 and braved sweltering temperatures and rain along the way.

Bearsun became a media sensation after he crossed into Arizona along U.S. 95 on July 19.

He stopped in several places, including Oatman, Kingman, Peach Springs, Seligman, Ash Fork, Williams, Flagstaff, and the Navajo Nation, where he spent most of his time – perhaps because people revered the suited man.

Diné Bikéyah is where people treated him like a celebrity walking the red carpet.

Larios said he’s going to celebrate and have fun with the Diné when he returns for Thanksgiving. He’ll arrive in Window Rock either on Thursday or Friday, said Larios.

“Walking through the Navajo Nation, yeah, it was tough,” Larios said. “But it was glorious. It was amazing and I learned a lot, especially from the culture … and even the land itself.

“And I took that with me the entire way,” he said. “It motivated me to finish.”

Larios said it’s clear the Diné have much respect for what he’s doing and his design of Bearsun created a ray of sunshine, a positive figure, in a world that seems scary right now.

He said the Diné understood this and took Bearsun seriously.

“I love the fact that (the Diné) understood and took (Bearsun) seriously as I did,” Larios said. “I want to make people laugh and smile, but at the same time, there was something even deeper than that.

“And (the Diné) understood,” he said. “That’s why I have respect not just for the Navajo Nation, but all the Natives that came out from all the different tribes.

While Bearsun’s journey is over, Larios launched a new one – running from Miami to Seattle in the “Run from Florida to Seattle, Washington,” which he – in a new Bearsun suit – will start on Jan. 1, 2022.

Larios said the run will be for all veterans, post-traumatic stress disorder, and mental health.

“I feel like I connected (with the veterans) the strongest during the journey (from LA to New York City),” Larios said. “The men and women, they sacrificed a lot. I was able to relate to what I was doing – sacrificing and being isolated from my family and friends.”

Larios said while on the journey, he often entered a meditation mindset inside Bearsun. This meditation, when the spirit is pure and non-judgmental, motivated him to respond the world around him in a thoughtful way.

“It’s called ‘the soldier mentality,’ where you can’t let emotions and your thoughts distract you from your mission,” Larios explained. “So, the (veterans) are who stood out to me on my journey. So, I’m dedicating the run to the vets.”

Larios added that his worn-out Bearsun suit is going to retire in LA, and he’ll wear a new Bearsun suit for the run.

“It got pretty bad (with rips and tears),” Larios explained. “I knew (the suit) wasn’t going to make it out alive, unharmed.

“But the fact that I still catered to it and gave it time and fixed it up while people were saying, ‘Get a new one,’” he continued. “Why would I throw it away? I know it’s not going to look at its best.

“I’m proud of it because it went through a lot,” he said. “It had its own identity.

“If I throw Bearsun away, I’m literally giving in to the whole culture of, ‘I’m not going to try but I’m just going to replace,’” he said. “I’m going to make it worth the suit. Me and you (Bearsun), through thick and thin, to the very end.”

Larios said people need to do that too: take life seriously and not just waste it and waste time.

Larios said this goes along with being inside Bearsun every single day led him to an intense form of mental concentration or visualization that focuses consciousness on his mission.

“So, it’s being in a tunnel vision, all day, hyper-focused physically,” he said. “Mentally, it wasn’t easy holding onto your purpose and being in prison in your own life.”

Larios said he also slept inside Bearsun, usually alongside the highway, depending on where he was. For instance, he fell asleep under a tree between Flagstaff and Leupp.

When he awoke, he found heaps of food and money tucked into his shoes.

“I was so tired, the day I got moccasins, and I was lying under this tree – so many people came out,” Larios said. “There were lines and lines of cars.

“I remember the cops showing up and I was thinking, ‘They’re going to trip out because there’s so many cars on the road,’” he said. “But they were like, ‘Dude, can we get a picture with you?’

“I fell asleep for (a while) but when I woke up, it was like a shrine,” Larios added. “Literally a shrine! I had money sticking out of my shoes! I had food everywhere! It was like I died, and I woke up.”

Larios said because he couldn’t carry all the food he received, he donated them to one of the nearby homeless shelters.

“I remember camping out in Leupp the first night and hearing coyotes, but they were dogs, and they came up to me,” Larios added. “I was eating a cookie and I gave it to them, and they sat there with me.

“It’s crazy thinking back,” he said. “My brain still thinks (me and Bearsun) are moving forward.”