Drought impacts: Officials warn of ‘point of no recovery’

With the Navajo Nation’s Commission on Emergency Management reaffirming the 2018 drought state of emergency, programs and leadership are discussing what can be done as climate change impacts the Nation.

The drought declaration was first put into place Feb. 26, 2018, and was reaffirmed in July 2020, before being reaffirmed recently on June 25.

The declaration states the U.S. Seasonal Drought Outlook for June 17 to Sept. 20 indicates the current drought should persist or intensify across the south and west swaths of the U.S.

“We feel it’s important to address the drought on an annual basis,” said Ben Bennett, a member of the Commission on Emergency Management. “The drought has only gotten more severe. We need to make sure our declaration is in place this year.” 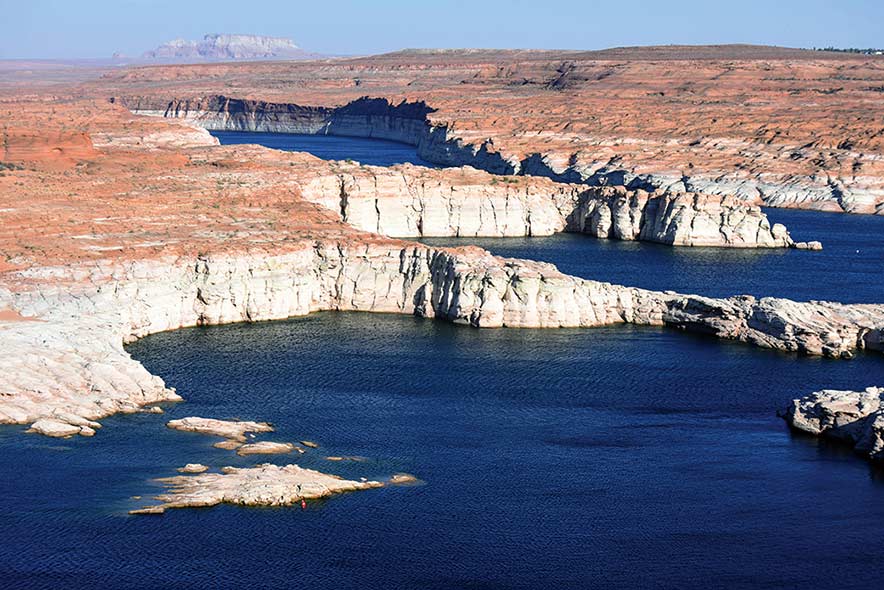 Special to the Times | Krista Allen
A white ring around canyons located at Lake Powell fell to 3,560 feet above sea level on June 29, down from an average of 3,610 at this time (June 30) last year. Lake Powell in Page, Ariz., is currently 34.26% of full pool (24,322,000 acre feet). Because of climate change, declining water levels and 20 years of drought have reshaped Lake Powell’s shoreline, according to Glen Canyon National Recreation Area officials.

March 15 snow survey data depicts snowpack on the Chuska Mountains to be 47% of the median. The forecast calls for well-below-average runoff for Wheatfield’s Creek, Captain Tom Wash, Bowl Canyon Creek and other Navajo Nation dams and reservoirs.

Eugenia Quintana, vice chair of the commission, said the discussion of drought on the Nation is ongoing. She believes the Nation needs to look at drought contingency plans with no sight of it letting up.

“Take a look at that,” Quintana said. “Chapters need to be aware of what is contained in that planning document and really work to find individual measures that can be used based upon what is found in that drought contingency plan for the Navajo Nation.”

The Drought Contingency Plan collaborates between the U.S. Bureau of Reclamation, Bureau of Indian Affairs, Navajo Division of Natural Resources, and the Navajo Department of Emergency Management. It guides chapters and federal agencies to appropriate actions to minimize drought impacts.

During severe droughts, the Navajo Nation Council receives dozens of chapter resolutions requesting assistance. Because of the lengthy and complicated tribal process, impacted chapters wait for many months for tribal funds to become available. And they often miss the opportunity to benefit from federal drought relief programs.

The contingency plan provides the Nation with a more straightforward, streamlined tool to determine which chapters should receive assistance.

Crystal Tulley-Cordova, with the Department of Water Resources, said it’s essential to understand how the magnitude of the drought is impacting the Nation. She said the drought the Nation is experiencing is higher in magnitude and lasting longer in comparison to the last 20 years.

“It’s important to have an understanding that when we think about drought that it’s not only an occurrence in the increasing temperatures, while also including the drying landscape and the little landfall,” Tulley-Cordova said. “But when you think about it, we are approaching the time of the Fourth of July. These are all perfect factors for fueling wildfires.”

As of Friday, there were 22 wildfires in Arizona alone ravaging the dry state. President Jonathan Nez issued an executive order beginning Stage 2 fire restrictions effective June 21 because the probability of catastrophic wildfire is exceptionally high.

“The threat of wildfires is very serious, especially in the Southwest,” Nez said. “In the four corners states, multiple wildfires are happening, and the impacts are even more devastating due to the lack of moisture.”

The USDA declared 533 counties in 20 states as “Secretarial Disaster Designations-2021 Crop Year, All Crop” because of ongoing drought, said Tulley-Cordova.

There are approximately 7,500 stock ponds on the Nation. As the water supply diminishes and evaporates, the 900 Navajo Nation windmills and numerous municipal wells––used for drinking––will experience more pressure.

Drought conditions have created a critical shortage of water and range feed for livestock, resulting in the poor physical conditions and an increase in diseases.

Land conditions will continue to deteriorate, and the socio-economic framework of the Nation will be negatively impacted, according to the Commission of Emergency Management.

Drought and climate change impacts on Navajo have become of great concern over the years.

“The plan itself identifies strategies for the Navajo people to use,” Tom said. “Since we don’t have control over weather patterns, precipitation patterns that we are seeing. What we have control over is our lifestyle, and we have the ability to adjust or amend the way we do things.”

The Climate Change Adaptation Plan covers water conservation, livestock reduction, and various farming practices to reduce the amount of water used. The Resource and Development Committee adopted the plan in 2019.

Nicholas Chischilly, a wildlife technician for DNR’s Climate Change Team, said one of the recommendations they give is “drought monitoring,” such as keeping, collecting, and maintaining data on precipitation in the Nation. Others include creating a strategic plan on drought response and land use, such as the recommendation of livestock reduction.

“We highly recommend RDC (make) a resolution recommending livestock reduction because (the land is) severely overgrazed,” Chischilly said. “The permitting system is dated, as we know. To accomplish this, establish an incentive program to help our people have less livestock on the lands.”

Other recommendations include: one, clarify the enforcement and compliance responsibility of the district grazing committee; and, two, resume agriculture infrastructure funding allocated to the horse management plan. And disclose water release dam schedules to the Department of Water Resources and the public for wildlife management public agricultural use.

“Possible solution for that is establish a possible cutoff date if the water level at specific lake is not at a certain level on that date, then there will be no irrigation during that year,” Chischilly said. “Specifically, the lakes that do not have perennial streams feeding into them. We want to have transparency on the dam release schedules.”

The Climate Change Team is visiting chapter houses and talking with land boards and grazing officials on the effects of climate change.

Chischilly said during these visits, the team is warning of “a point of no recovery” when it comes to the land, overgrazing, and drought.

“If the land gets eroded so badly, there’s almost no chance of it recovering,” Chischilly explained. “In terms of getting back to normal forage and vegetation cover.”