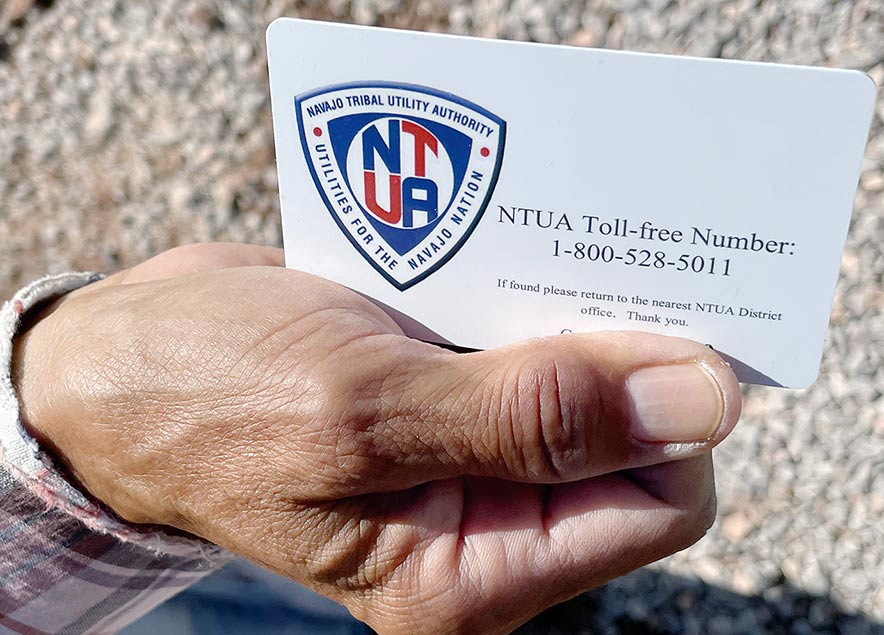 Navajo Times | Donovan Quintero
A NTUA water user shows the card she uses to get access to the water on Wednesday in Fort Defiance.

NTUA on Sunday issued a notice of price increases and limits on amount of water taken at all NTUA water-loading stations throughout the Navajo Nation.

The water stations are accessed by those with water-station cards designed specifically for convenient purchases.

“The tanks got really low, affecting other customers in higher elevations,” Koontz said on Tuesday. “Some places have experienced really low pressure.”

“This should allow for community customers to have adequate water supply to last them throughout the month,” according to a public notice issued by NTUA on June 29.

The overdrawing of water from the water stations is connected to NTUA customers who have running water in their homes. NTUA has around 38,000 to 39,000 water customers, said Koontz.

Cards could be deactivated

Koontz said NTUA crews are going to examine which water-loading stations have users drawing unnecessary amounts of water and they will “talk to them.”

Any cardholder found to be exceeding the water restrictions will have their card deactivated.

“We can look at cards – see who is using a lot of water – and we are going to ask if they can downsize,” Koontz said.

The increased use of water from the watering stations has impacted Navajo communities that are tied into the same NTUA water lines.

The NTUA public notice suggests a limit will be set on how many water station cards are to be sold to customers in water station communities. The business hours of these NTUA water loading stations will vary and will be based on the available water supply.

For more information, NTUA is encouraging its water-station users to check with their local NTUA district office to verify hours of operation.

Koontz said the water restrictions will stay in place throughout the summer to prevent water from running too low or depleted. A bad winter season and hot weather conditions contribute to the water levels being stressed.

Koontz said NTUA monitors the monsoon and how much precipitation it brings to the Nation.

Koontz said NTUA could not determine if watering station users are hauling water for their livestock.

“The first step is trying to control it,” he said. “We don’t want to take more severe measures. The water is not meant for livestock.”

While getting water from an NTUA water-loading station near the Fort Defiance Chapter House on Wednesday morning, a resident said it was a good idea that NTUA put a restriction on the water stations.

“I think it’s fair,” said the woman, who asked to remain anonymous. “Everybody would get their share because if only one person utilizes a lot more, then it’s not fair to those other ones.

“We’re all in this together. We all need to work together and be fair to one another and share the water supply.”

The woman said before the water-loading station was installed last year, she retrieved her water from Sawmill, Arizona.

“I’ve been hauling water for a long time,” she added. “It is a way of life for a lot of people whether they know if it’s good water or not, they’re still going to haul it regardless.”

During the coronavirus pandemic last year, volunteer groups like Water Warriors and DigDeep utilized water from various water sources in the Nation, including NTUA water-loading stations.

Koontz said he had a meeting with DigDeep, which provides service to its water customers in the Dilkon area.

“We are asking them to try to minimize what they are taking per load,” Koontz said. “We may be trying to serve too many clients at one time. Once you empty a system, no one has water.”

Local businesses like laundromats and car washes could be affected if the water shortage worsens, explained Koontz.

If it becomes worse, the watering stations could be shut off.

“Be conservative at home. Cut back on water usage,” he urged.

The pandemic also intensified the need for water in 2020, according to the Indian Health Service, which established and erected 58 transitional water points across the Nation using CARES Act funding.

The funding is supposed to last for two years or until the pandemic ends.

There are permanent water points that existed before COVID-19. They are managed by the chapter in which it is located or by NTUA.

With IHS’s CARES Act funding, there are permanent and transitional water points throughout the Nation where subsidized water is available for residents who live in homes with no piped water.

IHS identified four watering points that NTUA operates. Those water points are located in Cameron, Dilkon, Kayenta, and in Shiprock.

About 30% of the Navajo Nation lacks access to piped water service, according to the IHS. An estimated 37,000 people, or about 20% of the Navajo population, are without water.

On May 25, the city of Farmington issued a Stage 1 water shortage advisory because river levels are going low.

A letter was sent to NTUA on May 27, informing the utility of ongoing drought conditions and that the lack of snowpack from last winter prevented the city from replenishing the water supply. The advisory urged its customers to reduce water usage by 10%.

That advisory is in effect until further notice.