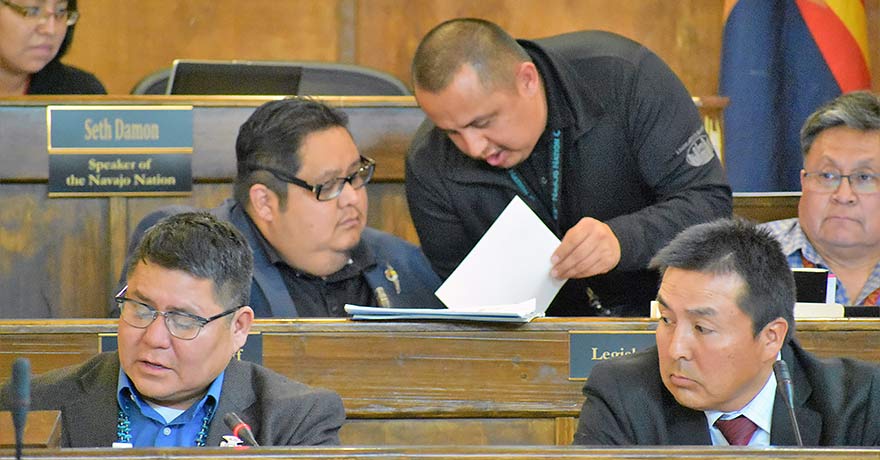 In a scene reminiscent of a re-run, several Navajo Nation Council delegates expressed dismay yesterday when they were presented with a veiled attempt to revive the acquisition of Navajo Generating Station and the Kayenta Mine.

This was because they had already decided the issue on March 21 when a bill that supported Navajo Technical Energy Company’s acquisition of NGS was voted down after weeks of consideration, public input, and debate.

“Right off the bat, Mr. Brown, this is just a re-wording of what we, the Nation, the Council, the Naabik’iyáti Committee meeting, had already defeated,” said Kee Allen Begay Jr. “There are no ifs, ands or buts about it.”

The new (No. 0093-19) bill, presented yesterday to Naabi by the sponsor, Delegate Nathanial Brown, and agent Jarvis Williams, tribal relations manager for Peabody Energy, would have called upon the federal government to “discharge the federal trust obligations owed to the Navajo and Hopi tribe” to ensure the acquisition once again moves forward to completion.

Williams said he was there “representing the miners” but that Peabody was supporting his efforts.

The stated purpose of the bill is a mouthful, which left some wondering who drafted it.

It suggests the Navajo Nation call upon the U.S. government to help the “further development of the economic sovereignty of the Navajo Nation” and “maximization of the autonomy of its energy resources” with no reference to NTEC, NGS, or the Kayenta Mine in its title, which could be construed as misleading.

“We want to facilitate the further development of economic sovereignty,” said Williams, as he began his presentation. “That’s pretty good, when a nation wants to step out onto its own two feet, and use their own resources.”

Williams went on to share a number of stats on the benefits of keeping NGS and the mine open.

Delegate Kee Allen Begay asked what was on a lot of people’s minds, “Do we have a representative here from the U.S. government for this discussion?”

Brown said there was no one from the federal government present but that the bill, if enacted, would open the doors to that conversation.

Brown stressed that the bill strives for self-determination for the Navajo Nation.

“Imagine if we can have the capability to make energy and sell energy,” he said. “What will Navajo look like if we could have that? If we’re going to be a sovereign nation, this is one way to really put our big feet into the door and really have some political clout.”

However, several delegates questioned how appealing to the federal government and pursuing sovereignty aligned, when sovereignty implies self-governance.

Delegate Charlaine Tso said to her asking the U.S. government to “facilitate” sounded like a plea for help and was not equivalent to government-to-government “consultation.”

RDC Chairman Rickie Nez, who supported the bill, said he appreciated the idea of collaborating with the feds and motioned to table the bill in favor of a work session with the Department of the Interior and the Department of Energy.

Delegate Nelson Begaye noted that the no one from from NGS was on the presentation panel. A representative of Salt River Project was also not present.

“They need to be part of this discussion, too,” said Begaye. “If we’re really going to do this, we need all the players here.”

Kee Allen Begay intervened to say that everyone who plays a role when it comes to the subject of Navajo Nation energy development, including renewables, should also be at the table for these discussions, not just one entity like Peabody, that has a specific agenda to drive.

“We need to be comprehensive,” said Begay, who added that the recommendations of the Navajo Nation’s “energy office,” still in development, should also be considered.

Daniel Tso chimed in saying the departments and divisions of the Navajo Nation should also be part of the conversation.

“This Council just confirmed many division directors because they are capable and are experts in their fields,” added delegate Elmer Begay. “Why haven’t we called upon those people to give us guidance and gotten their recommendations for how we can maximize our energy resources and increase our own economy? Why are we running to the federal government!?”

Daniel Tso also warned that the nation could get into “legal entanglements” if the Council goes back on decisions they’ve already made as well as with money the Nation has already accepted as part of the NGS decommissioning process.

Ultimately, while delegates such as Herman Daniels and Paul Begay, from the areas most impacted by the NGS and mine closures, pleaded with the delegates to pass the bill, doubt in the majority of the delegates’ minds dominated the conversation and the bill failed (5-12).

“I haven’t been convinced by your presentation and you haven’t convinced me on the intent of this legislation, said Kee Allen Begay.

“I’m trying to understand why the federal government should come and negotiate and facilitate,” he said. “At the end of the day it’s our decision of what we want to do. When it comes to sovereignty, the nation has the final say. That’s it!”