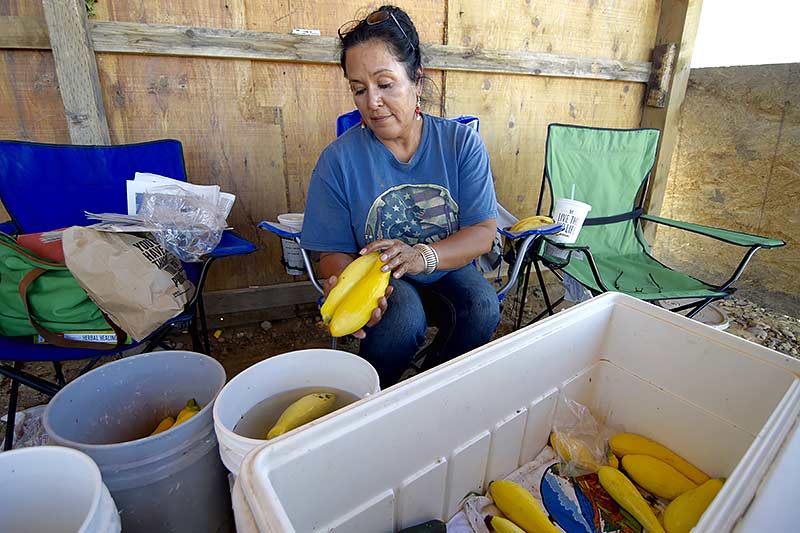 Sherrell Mesa moistures her squash at her sale booth Thursday in Hogback, N.M. EPA Administrator Gina McCarthy the EPA had set aside $500,000 to bring water to Navajo farmers along the San Juan. (Times photo – Donovan Quintero)

As an ever-more-diluted plume of toxic mine waste made its way down the San Juan River toward Lake Powell Thursday, some of the tension between federal, state and tribal authorities seemed to be dissipating as well.

The U.S. Environmental, Protection Agency, which had inadvertently caused the spill of three million gallons of mineral-rich water into the Animas River last Wednesday while remediating an abandoned mine near Silverton, Colo., was working with the Navajo Nation to bring clean water to farmers along the San Juan so they could irrigate their crops and water their animals. The Animas flows into the San Juan near Farmington. 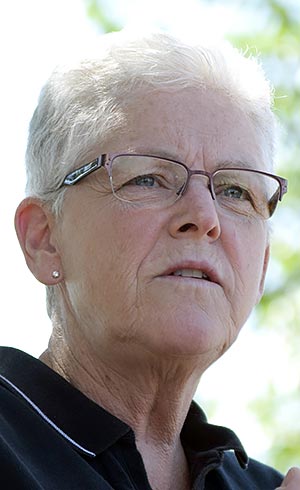 At a press conference in Farmington, EPA Administrator Gina McCarthy reported that she had had “a good conversation” with Navajo Nation President Russell Begaye, who was “extraordinarily happy” to learn that the farmers don’t have to fill out a claim form to get water to their crops; all they had to do was ask.

Although Begaye had stated on numerous occasions the tribe would sue the EPA over the spill, “frankly none of that tone was in the discussions we had” Thursday morning, McCarthy told the press.

McCarthy announced that $500,000 has been set aside by the EPA’s New Mexico Region to bring clean water to crops and livestock while farmers await confirmation that the spill has passed through and they can use the San Juan again.

Yazzie said the chapter had already instituted its own water hauling program when “This morning, S&S Trucking out of Farmington showed up out of the blue and said they had been hired by EPA to bring us water.”

The BIA had also set up some 10,000-gallon water tanks for livestock, he said.

Meanwhile, St. Mary’s Food bank, a Phoenix radio station and several other donors had sent up a total of more than 100,000 bottles of water for human consumption.

Nature had also cooperated with a nice rainstorm Sunday night.

“We’re not in a desperate situation yet,” Yazzie said.

After a lunch meeting with EPA personnel, Speaker LoRenzo Bates, himself a farmer, said he was relieved to learn water test results for the San Juan would be in by Thursday night. The Animas, McCarthy said, is back to pre-spill levels of heavy metals, so Bates was hopeful the San Juan would soon get the all-clear as well.

Meanwhile, residents along both rivers are still being advised to stay out of the water and not let their livestock drink from it. Bates said the decision on when to reopen the San Juan will be based on the advice of both the Navajo and U.S. EPA, which have similar water quality standards.

Bates said he was planning a meeting at 3 p.m. Sunday at Nenahnezad Chapter to share what he had learned, and how to get help with water, with his constituents.

In the meantime, Navajos who rely on water from the city of Farmington can feel free to turn on their taps; Farmington mayor Tommy Roberts said the city has a 170-day reserve supply for both its residents and the NTUA customers it serves.

U.S. Rep. Ben Ray Lujan (D-N.M.) speaking at the press conference, said that communications between New Mexico authorities and the EPA have been much improved since McCarthy arrived on the scene Wednesday. Lujan had initially criticized the EPA for not alerting New Mexico authorities to the spill until a full day after it happened, givimg them little time to prepare as it made its way from the Animas to the San Juan.

Now that the spill has been contained and the water still coming from the mine is being treated, people are starting to turn their attention to the future.

McCarthy said the EPA would continue to monitor both the river and sediments at its bottom, where the heavy metals had precipitated out, determine how best to handle the situation, and apply what it had learned from the spill to other mine cleanups. 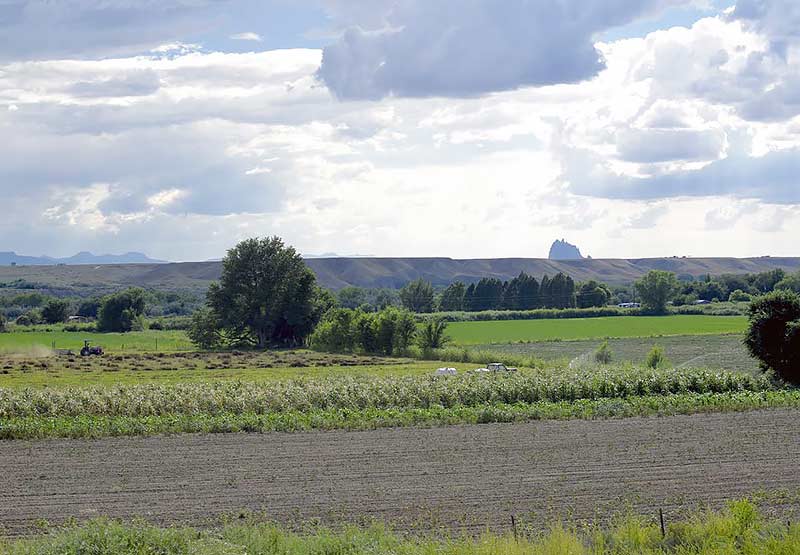 Lujan said he would work with Colorado’s Congressional delegation on a plan to clean up the hundreds of small abandoned mines leaching into the Animas above Silverton.

And Sunday Shiprock Chapter unanimously passed a resolution to appeal to the United Nations to urge the EPA to “immediately proceed with an aggressive program that will assure the total and complete cleanup of the damage it has caused.”

McCarthy said that’s exactly what the agency is trying to do.

“We’re here for the long haul,” she said.

Yazzie said the impact on the Navajos of the San Juan goes far beyond the potential loss of their crops.

“The spiritual connection we have with the land and the water … The impact is just unimaginable,” he said.

Confirmed fourth-generation farmer Sherrell Mesa of Tse Daa Kaan, N.M., “I feel like somebody died. It’s like there’s a scar on the river.”

On the other hand, said Yazzie, “Our grandmas would say, ‘The water is resilient. It’s designed by he Creator to take care of itself.”

Information: A hotline has been set up to answer questions about the spill at 844-607-9700. Navajo interpreters are available.