Warning: Invalid argument supplied for foreach() in /homepages/16/d210685788/htdocs/wp-content/plugins/leaky-paywall/include/class-restrictions.php on line 650
 Family of Pinto: Thank you for giving him water, food - Navajo Times

Family of Pinto: Thank you for giving him water, food

John Pinto, 94, the New Mexico state senator who served the people for 42 years and who trained as a Marine during World War II, was laid to rest on Thursday at a private burial ceremony in Tohatchi.

Before the burial, funeral services were held at the Sacred Heart Cathedral in Gallup where hundreds of people honored Pinto, who was trained as a code talker.

The church quickly filled to capacity. The church’s family center was opened to accommodate family and friends who weren’t able to get into the church.

During the funeral mass, Pinto’s granddaughter, Kellie Lynn Arviso, said she remembered him as being a good grandfather who taught them to never give up.

Evelyn Pinto provided an oration in Navajo and said Pinto was a man who believed in happiness and was always on the road advocating for the people of New Mexico.

“He did this frequently and was often on the road late into the night. He never gave up. That was him,” Evelyn said in her eulogy speech.

For his public service, she said Pinto was recognized by Navajo Technical University with an honorary doctorate on May 17 in Crownpoint.

Pinto was born on Dec. 15, 1924, in Lupton, Arizona. He was Dibélizhíní, born for Táchii’nii, and was the oldest of seven.

He got a late start in school, beginning at the age of 12. He graduated from high school in Torrance, California.

He enlisted in the Marine Corps and trained a code talker, but the war ended before he deployed. He was 21 at the time he was honorably discharged from the Marines.

Pinto worked for the Division of Social Welfare where he met the love of his life, Joann Dennison Pinto, whom he was married to for 65 years before her passing in 2017. They had four children: Flora, Cecil, Galen and Karen.

In 1952, Pinto returned to school and received a bachelor’s degree in elementary education. He later earned a master’s. 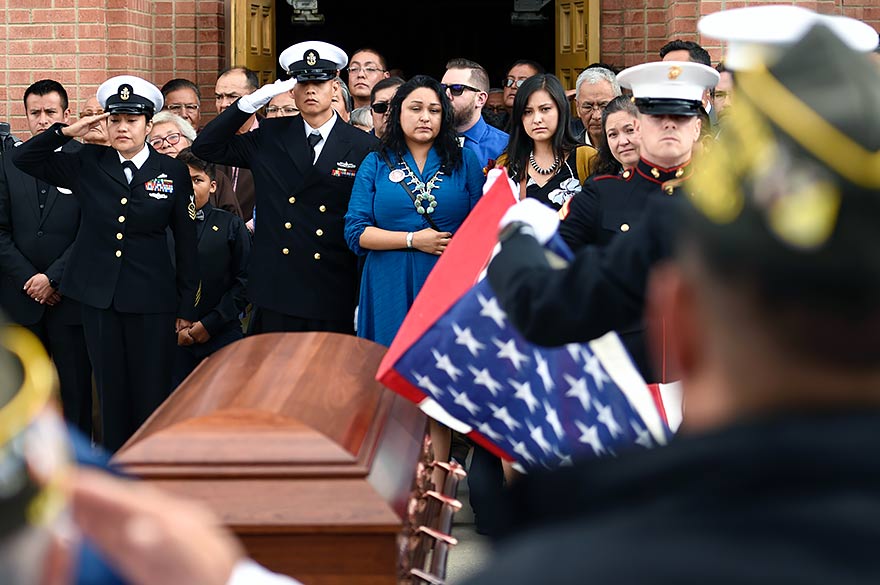 Evelyn said he always believed in being happy and loved people of all colors.

She said he never wavered from his philosophies during his life as a public servant. He went from home to home whenever a bill he was sponsoring was going through the Senate.

“He kept his work and family life separate,” she said. “When he was home, he was a father, a grandfather, and a nali at home. His family was his life.”

He lived his life that way, always trying his best to ensure everyone had water to drink and food to eat.

“You probably gave him water to drink, some coffee to drink and food and bread to eat while he was visiting with you at your homes,” Evelyn said, becoming emotional. “Thank you for your kindness and taking care of him for us in that way.”

After the funeral service, the Marine Corps Honor Guard from Fourth Recon, Delta Company, 4th Battalion, out of Albuquerque honored Pinto with a three-gun volley.

The flag that was draped over his casket was folded and given to his daughter, Karen Arviso.

Lizer remembered seeing him eating at Sizzler’s four days before his passing.

“My wife and I, we were dining with our family, it was my birthday,” he said. “We’re sitting and eating and, low and behold, there’s Senator Pinto, right in front of me, eating and drinking his milk. I went over and said, ‘Hi,’ and I introduced myself and he smiled. And it was so cool.”

“That’s when our friendship began,” he said. “I began leadership at the Council and stayed in touch with the senator. He was always looking out for the Navajo people, not just New Mexico, but all of the Navajo people, which I always appreciated.