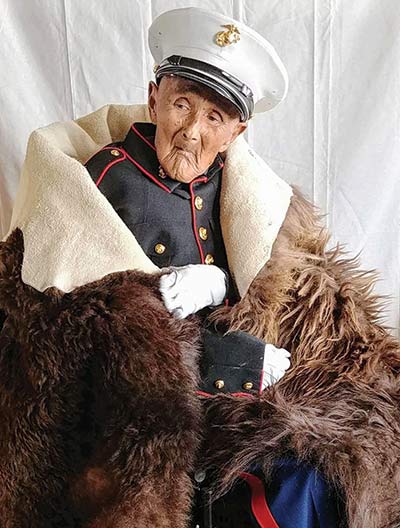 A family friend of Private William Tully Brown, the Navajo Code Talker who passed on Monday, June 3, in Winslow, has created a GoFundMe account to help family with funeral expenses.

“The family of Navajo Code Talker, USMC Veteran William Brown needs funds to pay for his funeral,” Estes wrote on the page. All contributions go to the family to pay for the funeral expenses.”

Earl Tulley, Brown’s son, said his father’s funeral is set for Thursday at the Church of Jesus Christ of Latter-day Saints Chapel in St. Michaels, Arizona, beginning at 8 a.m. A procession from the chapel to the Fort Defiance Veterans Cemetery will begin at 9:30 a.m. where the Marine Corps Honor Guard will perform military honors. After burial, a reception will be held back at the chapel.

Tulley shared his father’s military record with the Navajo Times. It says he enlisted into the Marine Corps in Phoenix. In the “Military Specialties” section, Brown’s specialty as a Marine was “Code talker 642.” He was with the 2nd Marine Division.

Tulley said his father and his brother William Tully both served in the Marine Corps during WWII, but William was the first to enter the military and was already serving when the code talkers were created. Earl said William Tully, who was known as Willie Yázhí back home, passed on 10 years ago, and his father was known as Willie Snééz, which means “tall” in the Diné language.

Brown, along with the Damon-Bahe Boxing Team, served as Grand Marshal during the 33rd annual Central Agency Fair parade on Aug. 25, 2018.

“The Navajo Nation was saddened to hear of the passing of another brave and selfless Diné warrior. The Nation is grateful for Code Talker Brown’s sacrifices and those of his family and community, to defend the freedom and liberty of our Nation and country,” said Nez.

Brown was Tó’aheedlííníí (The Water Flow Together Clan) and born for Tł’ááaschí’i (The Red Bottom People Clan).