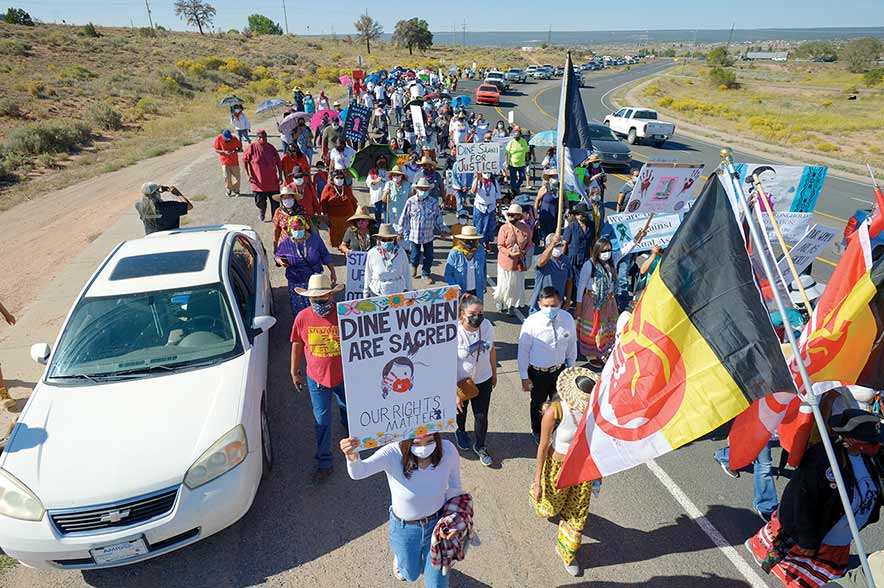 Navajo Times | Donovan Quintero
Hundreds of marchers participate in the Diné Sáanii for Justice march on Friday in Window Rock.

Charles-Newton, during a comprehensive budget hearing last Thursday, revealed she was sexually assaulted at the age of 17. The Council was debating on why the tribe needed to spend nearly $87,000 on a restroom renovation of the Washington Office’s new building.

The Shiprock delegate debated on using that money to fund the Office of the Prosecutor instead, which had long been dealing with a funding shortage. Charles-Newton was hired by former Chief Prosecutor Gertrude Lee to take the prosecutor job in Crownpoint.

The tribe purchased the Washington Office building for almost $4.9 million this past year. 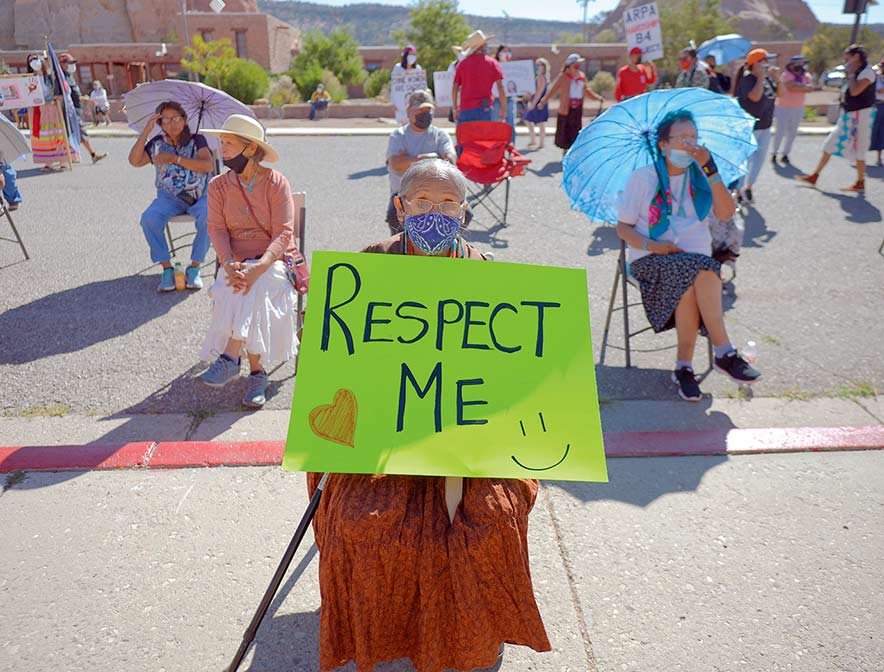 Navajo Times | Donovan Quintero
Patty Yazzie from Rock Point, Ariz., holds a sign that tells people what they could do on Friday as she listens to speakers during the Diné Sáanii for Justice march on Friday in Window Rock.

Former Council delegates Katherine Benally and Genevieve Jackson came out in support, along with hundreds of other people who walked in the march called Diné Sáanii for Justice. The march was to “uplift the voices of Navajo women and to address the concerns of community leaders, elders, and local activists,” according to a Council press release.

Jackson spoke at the Council chamber at the end of the walk. She began her speech by saying she did not know who her father was.

“I’m probably the child of such an incident,” Jackson said, implying she may be a child born from sexual assault. “There is a name on my birth certificate, but that’s all.

“My mother never talked about it. My grandpa and grandma raised me when I was one year old from that time.”

Jackson got a cheer from the crowd when she asked why the Council members were not there to support Charles-Newton.

“I was on the Council when there were 88 of us,” she said. “There were only five of us at that time. You have to be forceful, that’s what I realized being a woman on the council.

“We have strikes against you. You’re a woman, you’re a person of color, those strikes are against you, so you have to go out and blaze a trail, I’m talking to all the young women who are here now standing with us.”

Jackson shared her experiences and said the Council has been male-dominated for a long time.

“How are we gonna achieve balance and harmony when it’s male-dominated?” she said. “It’s not gonna happened. I’ve always said that. It should be half women and half men.”

While advocating and speaking her beliefs, she said she made enemies.

“That’s what you have to do,” Jackson said. “And they strike back at you. They know how to do that. I have my name carved in the men’s bathroom in this sacred house. This is not sacred anymore. It used to be blessed.” 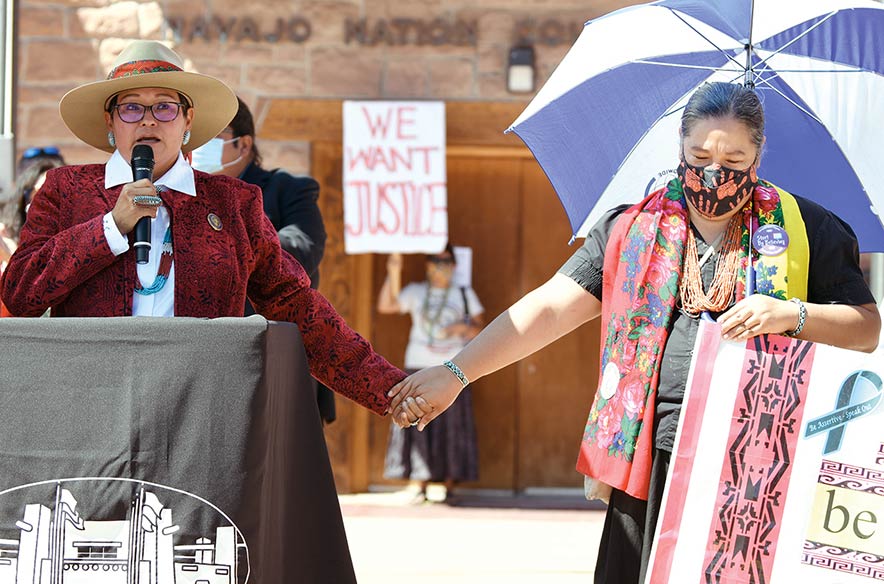 Like Charles-Newton, Jackson, originally from the Coalmine area east of Tsé Bonito, New Mexico, served as Shiprock’s councilwoman through the ‘90s. Currently, she serves as the vice-president at the Fort Defiance Chapter.

Fellow councilwoman Amber Crotty, who herself said was sexually harassed and groped, hugged and held Charles-Newton who eventually took the podium.

Charles-Newton recounted her ordeal and shared with the crowd how she was given a soda that may have been laced with a drug. She said did not remember much else after drinking the soda and woke up, she said.

“I took that Coke; I drank it, and I don’t remember what happened,” she said. “I woke up tied up in a shack. I had no clothes on. And he came in. He didn’t say anything to me. He removed his clothes.

“And I couldn’t fight. And he got on top of me, and he raped me,” Charles-Newton said as she became emotional. “He beat me for three days. He broke my cheekbone, he damaged my eye, he broke a rib.”

She said she felt defenseless as she tried to scream for help. She cried and imagined suddenly being rescued and being taken away from her nightmare.

Afterward, she did not speak about it because she was told she would be labeled a “whore” and that she deserved. She added it took a long time for her to share what happened to her with her husband, who stood by her holding an umbrella over her.

“It’s a pain that you never forget that never leaves you. That’s my story,” she said.

Charles-Newton reiterated why the prosecutor’s office needed funding because it was important for victims.

“It’s important for healing, it is important for the home,” she said. “If this position in the prosecutor’s office can be funded for more than 30 years, and if it can grow by starting off with one (position) in each agency — it will help our people to heal.

“More importantly, this position can give victims hope that their case will see some justice, and that somebody is fighting for them.

“Sometimes when we are in a situation, where we find ourselves to be victims, the strongest person still needs somebody to fight for them.”

Crotty voiced her support for funding the office too and said it was needed to “help families and survivors with their healing journey.”