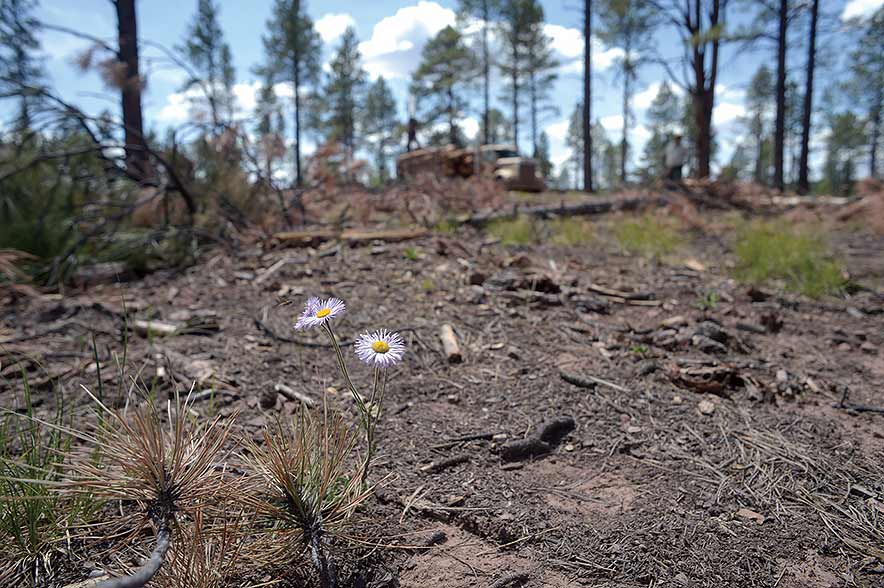 Navajo Times | Donovan Quintero
An aster peeks out above a burned-out forest, providing a metaphor for a fire's rejuvenating effect.

Tsoodził, once the home of Yéi’iitsoh, received a blessing when over 8,000 aces of ash darkened its side.

The consecration came from lightning that came during an August monsoon.

When Alvin Whitehair, manager for the Mount Taylor Ranger District, and his crew saw the smoke rising north of the mountain, they realized it was their chance to let Mother Nature’s atsiniltł’ish cleanse the debris of dead pine needles and overgrowth of plants that were doing more harm than good, So they gave the fire a name – Triple Nickel Fire.

They let it burn and went into monitoring status. Since the ground was wet from the summer monsoon, Whitehair said they felt the fire would not get out of control.

He was right. The conditions were as ideal as they were going to get. If the district ranger was going to take advantage of nature’s cleanser, that time was now.

Whitehair’s trained eye and years of experience managing the health of forests told him Tsoodził’s forests, vegetation and overgrowth of new trees fighting for space and nutrients could eventually ignite into an uncontrollable forest fire.

That’s why he knew they needed to take advantage of the lightning-caused fire.

“There are lots of benefits, lots of stored nutrients in the ash,” Whitehair said. “When it rains all the nutrients get recycled back into the soil which gets sucked up by the vegetation that’s left behind. That in turn makes the vegetation more productive and healthier for wildlife.”

After awhile, as the fire began to wane, the forest rangers got together again for another meeting and decided to help the fire continue burning.

A Type III fire team from Albuquerque was called in to help keep the fire under control. On Aug. 22, helicopters began dropping what they call PSD, or Plastic Spherical Dispensers, which are filled with highly combustible chemicals that burst into flames inside one-inch plastic “ping pong” balls, which are dropped onto the forest floor.

The results were noticed quickly from as far away as Albuquerque and Gallup as billows of smoke resembling the Museum Fire in Flagstaff alarmed surrounding communities who thought another sacred Navajo mountain was up in flames.

“It looks like a wild fire gone out of control, but it’s actually under control,” Whitehair explained. “The soil is damp enough to prevent the fire from going out of control.”

Such was not the case a little over a year ago, on April 12, 2018, when 70 mph winds combined with dry and hot conditions – the opposite of the Triple Nickel Fire – quickly turned a prescribed fire in the Zuni Mountain Range into a raging inferno.

The Diener Canyon Fire, aided by gusting winds and acres of overgrowth and debris of deadwood, raced across the mountaintops and valleys with dangerous ease and burned 1,000 acres in 30 minutes.

While the fire raged, another started – the Bluewater Fire – caused by an abandoned campfire, which quickly grew into another fire monster. It, too, aided by the winds, burned more than 2,000 acres in 30 minutes.

Pre-evacuation notices were given to several communities in the Bluewater area as both fires seethed closer and closer. A shelter was set up at Grants High School and the Grants rodeo grounds was opened to house livestock.

Several fire-fighting teams and helicopters, including two Type 1 crews and four Type 2 crews, were dispatched. More than 12,000 acres later, the fires were squashed.

Mountains on the mend

More than a year later, Whitehair said Mount Sedgwick was on the mend and would be healthier because of the Diener Canyon Fire.

He explained that nutrients in the ashes had been broken down by last winter’s snows and turned it into a frozen soup. Combined with a wet spring and summer season, the warm weather freed the highly energized soil that was rich with nourishing supplements that trees and vegetation need to thrive.

The Triple Nickel Fire, Whitehair said, was creating the same conditions necessary for a healthy forest.

Being Navajo, he said what a forest fire left behind – acres of ash and burned trees – was as if the mountain was given a Navajo “blackening,” or nt’eesh ceremony.

And like people who do not take care of themselves are potentially putting their lives and health at risk, forests too, overgrown with trees and vegetation, create an unhealthy environment, Under ripe conditions, this could easily become an out-of-control fire.

He explained that there were two components of ash – white ash and cinder – both of which contribute to the health of a forest.

“White ash, éí łeeshch’ih wólyé. Dinék’ehjí, whenever there’s a threat of tornado, or bááhádzid haleehgo, the medicine man will mix that ash with water and put that in his mouth and blow it out and tell the clouds to take it away, áádóó ádįįh,” he said. “Then the other component is the cinder, łizhiníígíí, tsííd.”

From his viewpoint, looking at what seems like a destroyed forest was actually a forest that got a Navajo ceremonial blessing, thanks to the lightning.

He added that during a fire, whether it was prescribed or not, he would take his eagle feather and use it to smudge the mountains and forests under his authority, which extends into McKinley and Cibola counties, covering almost 500,000 acres.

“Since I’m the head manager of the Zuni Mountains, whenever there’s a forest fire, or a managed burn, I take a feather and smudge,” he said. “And then the smoke lifts up. It’ll go over the entire community of Milan, Grants, Albuquerque and Santa Fe.

“So I kind of see myself as smudging whole communities for goodwill and good action,” he said.

He emphasized that fires intentionally started by man were not natural.

Bluehouse, who is a practitioner of the Beauty Way and Enemy Way ceremonies, said there were two types of lightning – female and male.

“Even though fire is destructive, it is also life-giving,” he said. “In other word, the way we discover that has to do with Diyin, sa’ąh naaghéí bík’eh hózhǫ́. Diyin is that destructive force that is giving life. One side we call chaos, the negative side. The positive side is called order.”

The balance is between everything growing on a mountain intertwined with everything in the air. If one side were too great or less, a negative affect would most likely occur, either from natural or human influences, Bluehouse added.

The Chuska Mountains was a good example of a negative affect that was slowly becoming bigger and bigger because of overgrazing, which is a human influence. And nature’s law, he said, was simply abiding and growing according to those influences.

“While at the same time, other matters occur, which is life-giving,” he said. “So as Diné, that’s how we understand things.”

For the Mount Taylor Ranger District, Whitehair said he has more plans for maintaining the health of the forest. Next year, he said, they were planning to start working on the forests in McKinley County, which are ripe for a forest fire.

“The forest might look healthy because of all the green trees and plants,” he said of McKinley County’s forest. “To me, it’s not.”