For a moment, staff at the Rehoboth McKinley Christian Health Care Services were able to breathe a sigh of relief. 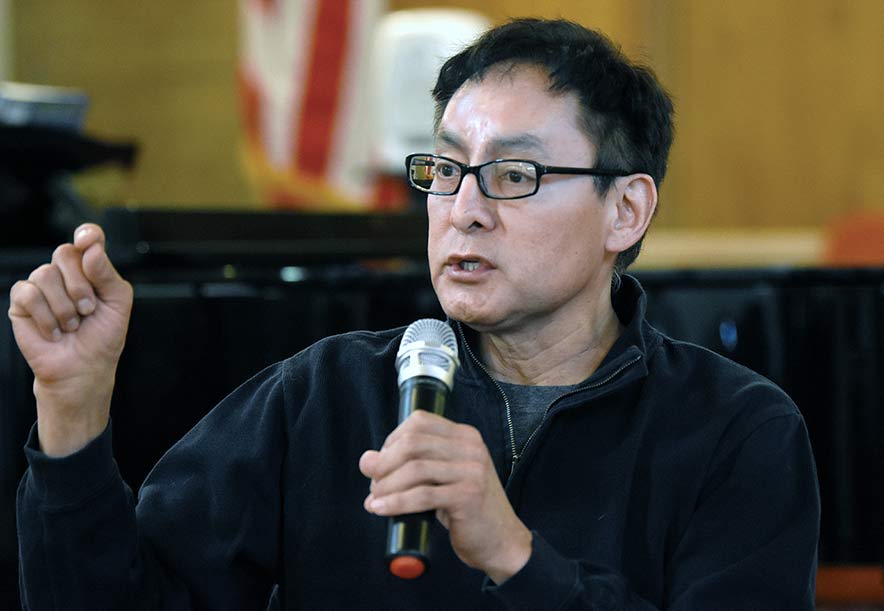 Navajo Times | Donovan Quintero
Dr. Caleb Lauber, who has been practicing for 28 years, speaks on Saturday about Rehoboth McKinley Christian Healthcare Services during a meeting in Gallup.

The hospital’s former CEO, David Conejo, was fired on June 12 of last year and staff at the hospital felt a change for the better was happening.

New Mexico State Auditor Brian Colón said last June said he would monitor the transition of leadership as the board appointed interim CEO Mary Bevier, the hospital’s CFO, to take over operations.

Diné physician Caleb Lauber, from Houck, Arizoan, who is Honagháahnii, born for Táchii’nii, was the hospital’s director of community medicine at the time.

He participated in a May 9 protest. He said then that 76% of the money the hospital generated came from Native communities.

It seemed the hospital, which provides care within a 60-mile radius, and the staff might begin seeing a brighter future.

Nearly 17 months later, the sigh of relief has turned into what some RMCH doctors and nurses called a “culture of fear,” after the board hired Community Health Corporation from Plano, Texas, in August.

RMCH, in May, extended an agreement with CHC to continue managing the hospital for three years.

When the CEO position was offered, Lauber, who has been practicing for 28 years, applied. Not only did not get the job but he was fired and escorted off the property on July 5.

On Saturday, Lauber told an audience of about 100 people he felt very discouraged because he felt like he was “abandoning the patients.”

“It was just a really sad thing,” he said. “It was very discouraging.”

Lauber, who was the hospital’s only Diné physician on staff and chief of staff on the board, said his firing has made it virtually impossible for him to apply for any job at RMCH.

“That means that I couldn’t apply as the CEO or any other jobs,” he said. “And this is my home. And this man from Kansas City is telling me that I could never ever apply back in this area again.

“What an insult,” he said. “I had all my Navajo patients.”

The Diné physician is not new to taking on CEOs. Lauber said he took on Sage Memorial Hospital’s former CEO, Ahmad Razaghi, in 2013.

A 2013 Navajo Times article reported that Lauber and four other former workers became suspicious of financial dealings at the hospital.

Razaghi was a CEO of a health-care management company, Morgan and Associates, the Times reported.

“That was a mess, and it was really taking advantage again of the Navajo people, so I was at the forefront of that,” Lauber said. “We eventually were able to get rid of that CEO, and that was a long and arduous path.” 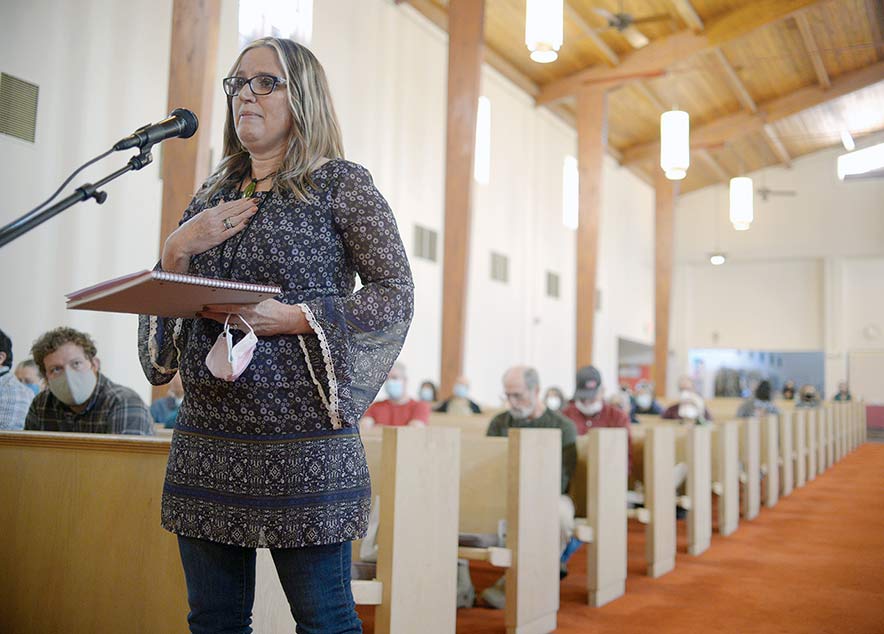 Since his firing, Lauber said he went into private practice with Dr. David Mackenzie.

“It’s going to be interesting to see how this next stage of me being in private practice is going to be,” he said.

Testimony from former RMCH nurses and doctors that were given at a meeting on Saturday attributed the bane of the hospital’s atmosphere, and their reason for resigning, to current CEO Don Smithburg of Community Hospital Corporation and the RMCH Board of Trustees chaired by Steve McKernan.

Lauber said the hiring of Smithburg and the work they were doing was “substandard, inappropriate, threatening, and unprofessional.”

“And we want them out,” he said. “We don’t want them here. They have done more damage in this short amount of time than any other group.

“So, hopefully Don Smithburg gets that information that we don’t want him here,” Lauber said.

In May, Smithburg announced the WellSpring Recovery Center, a residential substance abuse treatment center would be shuttering operations. He said the 26 employees affected by the closure were offered the chance to apply for positions at the hospital. The former employees were also offered severance and outplacement packages.

Then on Sept. 24, RMCH officials announced another vital unit of RMCH was going to close.

RMCH “is temporarily closing its Women’s Health Unit,” a statement read. “Patient safety is the top priority, and the hospital is currently unable to provide appropriate clinical coverage to operate the unit safely.”

The press release said the unit, which handles labor and delivery, was expecting to reopen at the end of this month with “full nursing coverage.”

The statement alluded to a nationwide nursing shortage as a reason for why the hospital was unable to provide appropriate clinical coverage to operate the unit safely. It added hospital was working with physicians, emergency transport services and acute care providers to ensure continuity of care.

“The emergency room remains open and ready to provide care to any expectant mother needing urgent treatment,” the Sept. 24 statement stated. “The hospital is recruiting for much-needed nursing positions.”

On Saturday several mothers spoke at the meeting and recalled the hospital’s caring OB-GYN staff and how they saved the lives of their babies.

Dr. Hannah Palm, an OB-GYN specialist, told the audience on Saturday, she resigned from RMCH because the hospital not providing enough care for the patients.

“I took an oath as a physician to provide safe patient care,” Palm said.

She added having to tell patients she’s been walking “through nine months of their pregnancy with,” to find care somewhere else, was “very difficult.”

“We want to be here in Gallup,” Palm said as she became emotional.

In August, doctors at RMCH voted to unionize with Union of American Physicians and Dentists.

The union president, Dr. Stuart Bussey, said the union was formed to protect their patients “without fear of reprisal for speaking on their behalf.”

Union member Rachel Flores said an ad that ran in a local newspaper asking for people to sign a petition, provoked hospital administration to inform employees to “watch out” if their names or their family’s names were on the petition.

“This is the environment that the workers are working in,” Flores said. “Every day they go to work in fear. Nobody should be in fear when they go to work. For that reason, we’ve come here to Gallup.”

Smithburg sent a statement to the Navajo Times on Sunday stating that CHC appreciated the community’s passion.”

“RMCHCS remains a vital health care resource and economic driver for Gallup,” Smithburg said in an email. “We share this passion, which is why new leadership with deep professional experience was recruited to help stabilize the organization.

“We will continue our intense focus on the challenges and opportunities that lie ahead,” he said. “Right now, that means stabilizing the hospital’s financial outlook and quality assurance programs after years of mismanagement.”

Smithburg added the hospital would be reopening the labor and deliver unit in a few weeks, as well as install a “long overdue nurse call system,” finalize a new electronic medical records system, and continue to aggressively recruit and retain nurses and doctors.