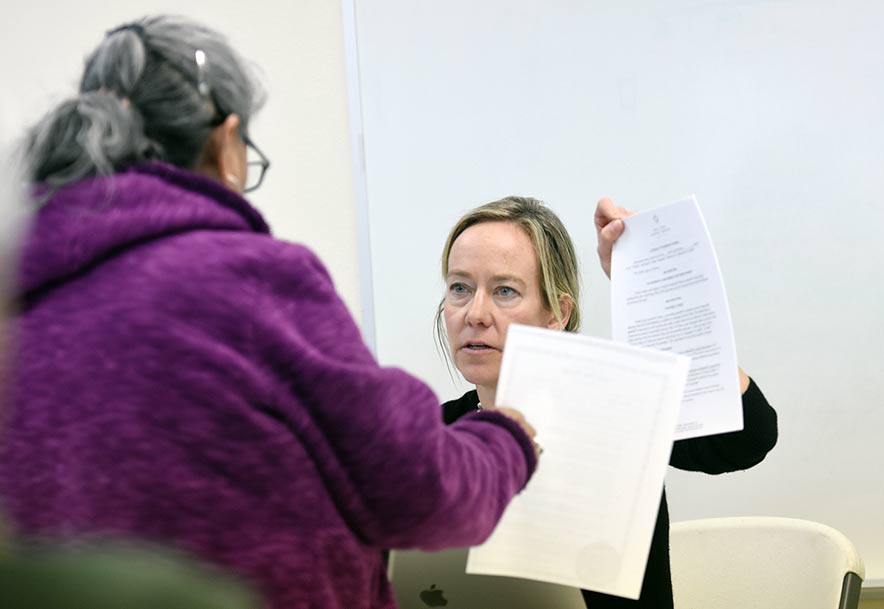 Navajo Times | Donovan Quintero
Attorney Kate Ferlic with Egolf, Ferlic & Harwood out of Santa Fe, speaks with one of her clients about their lawsuit on Jan. 16 at the Hogback Chapter House.

Farmers Cecil and Marsha Duncan cannot shake the stigma – even after last summer’s back-breaking work, tilling, planting, and watering their 10-acre field of hay, corn, melons and other assorted last summer – that their crops are forever contaminated by 2015 Gold King Mine spill.

So they, and nearly 300 other fellow farmers and ranchers, filed a lawsuit in August of 2018, against the U.S. EPA, the owners of the mine and the contractors who released the contaminated water.

But since all they knew was farming, the Duncans decided they needed to keep doing what they loved.

It wasn’t easy for the Duncans to make the decision to start farming again. After not planting anything for nearly two years, they planted their first crops in 2017. After all, scientists said water quality in the San Juan River had returned to conditions prior to the spill, which spilt nearly 540 tons of metals, like arsenic, lead, iron and aluminum, into the Animas River.

In the fall of 2017, Marsha said her husband and their son loaded up the crops to sell along U.S. Highway 64, wondering how they’d be received.

“My husband and son went to sell our products by the road,” Mrs. Duncan said last Thursday. “Our customers would ask, ‘you guys still using the dirty water?’ We try to tell them that supposedly it went, it passed by.“

Like many of their neighbors living along the river and making their living selling the crops they grew using the river water, they did not do so well. They said they received the same treatment by would-be costumers in 2018 and 2019. The stain the spill created seemed to be as strong as ever and it was hurting the farmers.

According to the lawsuit, Duncan submitted a claim to the EPA in August 2017, for personal injury and property damages. The lawsuit stated Duncan did not say how much he was seeking and would let the court determine the amount.

Like the Duncans, Earl and Cheryle Yazzie from Shiprock, also filed a claim with the EPA around the same time, and for the same reasons. Unlike the Duncans, they have yet to plant a single seed into the ground on their seven-acre farmland. To them, the contaminants from the 2015 spill would always be buried in the riverbed, waiting to be disturbed.

Prior to the spill, Yazzie said he had just harvested two jars of corn pollen, or tádídíín, which is sacred to the Navajo people, from his field of corn. That was in 2015. Almost four-and-a-half years later, he said they were nearly out.

“We harvested the pollen in 2015,” he said after meeting with the attorneys at the Shiprock Chapter House in Shiprock, last Thursday. “We used during this whole time to pray with it, and now we only have a little bit left.”

Yazzie and his wife stood in the chapter house and grew quiet after they remarked on how much pollen they had left. The lawsuit in which Earl is a plaintiff, states the plaintiffs were members of the Navajo Nation, and have “an enormous cultural and spiritual connection to the land and waters of the Animas River and San Juan River.“

Since 2015, Cheryle said they have been using the harvested pollen to pray for the river to heal. They both said they would continue to not use the river water despite it “looking normal.” In the meantime, they were holding onto the last bit of hope their voices would be heard through their lawsuit.

One of their attorneys, Kate Ferlic with Egolf, Ferlic & Harwood, told their clients some news that gave them some hope.

“So, your case is progressing,” Ferlic said. “Your case was put together with the other plaintiffs in this suit. So meaning we are litigating along side the state of New Mexico, the Navajo Nation, the state of Utah, some non-Navajo farmers and ranchers, and us.“

Ferlic added there was a chance the lawsuit could be settled this September. If not, they would be going to trial, she added.

“The case will likely go to trial in late 2021. We are still a long way off,” Ferlic told the Hogback farmers.

A farmer asked if there was a statute of limitation, to which Ferlic said there was, sort of.

“In terms of litigation, the longest case that I have had lasted 11 years,” she answered.

“We’ll all be dead by then,” the farmer responded.

“Oh no, you’re young,” Ferlic said. “There is a saying, ‘justice delayed is justice denied.’ And I wish that our court system moved more quickly. But the reality is that is doesn’t. We’ve had 500 individual sets of pieces of paper that have been filed with the court that all ask for the court for a decision. The court is making quick decisions. When they are complicated, it takes a month or two. When they are simple it’s taking a week. And this is fast in litigation land. I know it feels very, very slow.”

Along with the nearly 300 Navajo farmers and ranchers $70 million lawsuit, Utah is seeking $1.9 billion, New Mexico is seeking $130 million, and the Navajo Nation is seeking $162 million. All the lawsuits have been consolidated and are being heard by U.S. District Judge William P. Johnson in a federal court in Albuquerque.