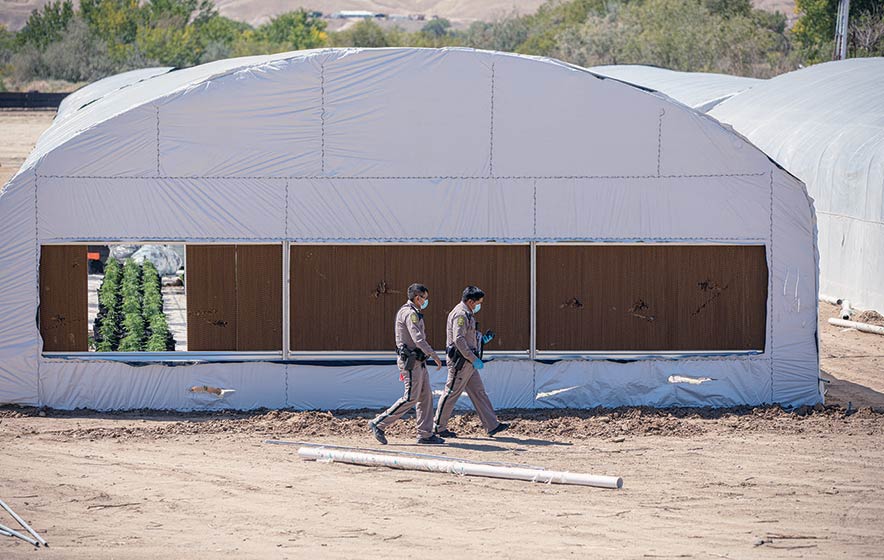 Shiprock farmers and residents who have been impacted by Dineh Benally’s hemp production say they haven’t received any relief and on Monday launched their third major protest against hemp farms in the community. About two dozen protesters gathered early Monday morning and marched to the Shiprock Police Department from the Shiprock Chapter House.

The protest resulted in the destruction of one of Benally’s hoop houses, which is used to grow hemp (see sidebar).

Their concerns remain the same: the strong odor of the plants, an influx of migrant Asian workers and an increase in speeding traffic. At the beginning of the summer as production ramped up with the building of more farms and hoop houses, Bea Redfeather-Benally documented non-Navajo workers placing tarps up at a farm located across from her home.

At that point, she said, Benally, who is also the Shiprock Farm Board president, had offered her money to tap into her water system. Since then, she said, two of her foster dogs have been run over by speeding Benally employees. She is worried about the safety of her child.

She has been documenting everything and posting it on her Facebook page, as well as being one of the most vocal opponents of Benally’s hemp production. As she walked behind the group of protesters, a grey truck followed. The occupants waved a sign stating support for hemp.

Paying them no mind, Redfeather-Benally (no relation to Dineh) listed what the community has been dealing with. She said she feels no one, from the Navajo Nation Police to Navajo leadership, is listening to their pleas to stop the hemp production, get rid of non-Navajo workers, and as one of the signs put it, get “Justice for Farmers.”

The Navajo Nation is currently suing Benally, saying he failed to get proper approval of the hemp farm; Benally countered that the Shiprock Farm Board has the power to grant permission to hemp growers in its jurisdiction. “We are here until Dineh Benally and his unwelcome guests are out of here,” said Redfeather-Benally. “Why is that we are doing it the right way and trying to get it shut down, but yet Dineh Benally is doing it the wrong way and he still gets to get police backup?

“He still gets to call in on us and get police assistance and when we are doing it right they try to shut us down,” she said. Benally’s proponents have pointed out he paid local farmers to use their fallow land, but the protesters say he took advantage of their poverty.

In the 2010 Census, the population of Shiprock was 8,295 with a median household income of $36,000, and a poverty rate of 31.6%, so when Dineh Benally rolled up with a wad of cash in hand, some found it difficult to resist. Although there are reports that he harassed or threatened farmers for their land, there are many who willingly gave up farms to him because they no longer operate and Benally reportedly paid cash, leaving no paper trail for the IRS.

This is what happened to farmer Francine Kiefert’s brother. Although she utilizes the farmlands her late father left her by growing different types of melons, her brother, who battles alcoholism, sold his farm to Dineh Benally. She’s worried now her brother will lose his farm completely if Dineh Benally is prosecuted.

“He doesn’t know how to keep his finances and we are worried about him,” said Kiefert. “It’s an ongoing rollercoaster for him, and for him to suffer like that. We tell him its illegal. We’ve had that farm for years, since I was a little girl.” Kiefert also said bad or corrupt leadership has allowed Dineh Benally to run rampant with his hemp production.

The hemp farm has divided her family, and that divisiveness is becoming apparent within the community as well. “The labor force from these Asians, the population has grown up to a thousand,” said protester and farmer, Kyle Jim. “I can only imagine the population will double before the year ends. “They are pulling in mobile home trailers just about every week,” he said. “There are local families that support Dineh Benally through the land labor force and cooking meals for the local labor force. There is a lot of unsaid support from both sides.”

Some protesters held up signs urging a boycott of local Asian restaurant Bamboo House. Protesters say the business has been helping the growing population of non-Navajo hemp workers by staying open during lockdowns and curfews for workers to meet and eat. “We have noticed these outside investors (in the hemp business) meet at Bamboo late at night,” said Jim. “You can see the Bamboo restaurant is closed, but yet you see all of these out-of-state plates parked outside of the restaurant.”

Hemp is just the beginning, said Jim. He said local leadership is weak and easily bought by outside companies promising economic development. Jim expressed his concern for the local mountains nearby, saying now “they want to get their hands on that.”

“All of this really plays a huge unseen destruction of the Navajo Nation,” said Jim. ”If we don’t do anything right now this will continue. “I am Diné,” he said. “I am a tribal member and we are on tribal land. I refuse to survive on my own land with these outside businesses setting up.

“Our people will be working for other people on our own land,” he said. “What we need is local business leaders to step up. We also need to elect the correct leaders. We need to get the leaders who are actually for the people and not looking to benefit for themselves.”

As the rest of the country clashes over brutal and deadly police tactics, Navajo citizens and leadership have been calling on the Navajo Police to deal with the hemp problem.

Over the past six months, Navajo Police have been tasked with enforcing public health orders and checkpoints, losing one officer and one criminal investigator to COVID-19 along the way.

They’ve also had to halt their police academy after recruits tested positive for COVID-19, and over 20 officers and staff have contracted the virus so far all having recovered. So far the Navajo Nation Police have only 198 commissioned officers serving the entire Navajo Nation, they have to deal with weak Navajo codes and laws, continue to work in old, mold- and asbestos-infested buildings,  they have little to no support from tribal leadership, they lack resources, and no CARES Act funding went directly to their department.

So far, protests have not drawn any tribal leaders and Monday’s protest was no different. Francisco and Deputy Chief Daryl Noon stood and watched as protesters yelled their frustrations at them. In videos taken by residents and shared on social media, Francisco can be seen talking with farmers.

At the beginning of the protest he was also seen talking with protesters before they marched on. “I got word they were protesting again and I want to be there to support the community’s concerns and make sure they’re safe,” said Francisco at the protest.

“They started to direct comments toward the police department, which is normal for them to have concerns on response time and what we are doing. “They wanted to voice their concerns for us to do more,” he said, “and I agree and we are doing more and trying to do more. It was their time to voice their concerns and for us to listen, so it was good for our officers to hear the comments first-hand so they can adjust their response.”

Francisco said he has been working diligently alongside with FBI, BIA, federal immigration and other partners to deal with this hemp mess. He said he sent officers to the Bamboo House but the doors were locked and no one answered. Critics have also said the Business Regulatory office and Department of Economic Development have the power to shut down businesses on the Navajo Nation, especially those that break curfew or lockdown and continue to stay open, and should deal with the restaurant.

Dineh Benally’s hemp production sheds light on the divisiveness within families, communities and the Navajo government. But more importantly it sheds light on the lack of economic development opportunity for the Navajo people. “Just being in a low-income community you can flash $1,000 and $5,000 and buy certain people,” said Jim. “That’s detrimental of our community, being that we are low-income.”

Neither Dineh Benally or his attorney, David Jordan, returned emails. A phone message to Bamboo House also was not returned.