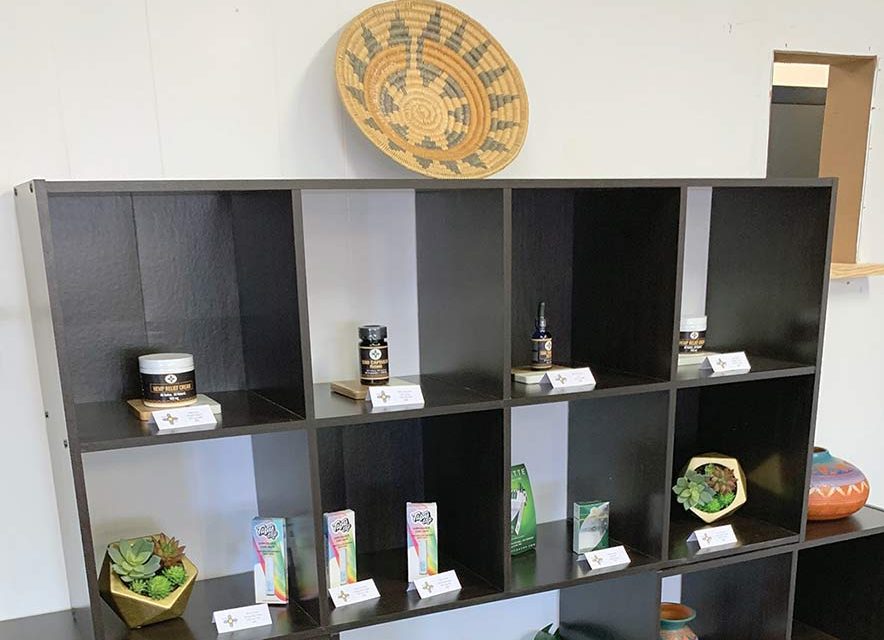 Although it is not federally regulated and can be purchased by anyone over the counter off the reservation, the process for buying cannabidiol products at the new Navajo Gold Health and Wellness Center here resembles the customer experience at a marijuana dispensary. The customer is carded and ushered behind the counter to view the array of products, including edibles, creams and vape cartridges.

Asked why the elaborate process, an employee said the shop wants to have the protocol in place in case marijuana is legalized on the Navajo Nation and Navajo Gold starts selling it.

In spite of President Jonathan Nez’s warning last Tuesday that hemp production is still illegal on the Navajo Nation, the reservation’s first hemp products store opened last Thursday with only one glitch. Police shut down the shop at about 11:30 a.m. on Friday, saying the store did not have the proper permits from the Regional Business Development Office to occupy the building. Business owner Dineh Benally called the incident a “misunderstanding,” but declined to elaborate. The store opened again about three hours later.

When a Times reporter visited the shop about 10:30 a.m. Friday, there were no other customers, although an employee said business had been fairly steady Thursday. The Native American Agriculture Company, which owns the Navajo Gold brand of CBD products, shows no signs of backing down in spite of the president’s statement in an interview with the Navajo Times that it is illegal to grow hemp on the Nation.

Benally, who heads both the NAAC and the San Juan River Farm Board, stated in a press release last Thursday that the 2018 U.S. Farm Bill and Navajo Nation law both allow for hemp cultivation, and the company intends to continue and expand production. “After the success of last year’s pilot program, we stepped up production for 2019 and plan to produce more going into 2020,” Benally stated.

A Hemp 101 seminar, sponsored by NAAC and the farm board, is slated for Oct. 21 at the Shiprock Chapter House, and on its website, NAAC is soliciting applications for “hemp and cannabis licenses” to operate hemp-related businesses including cultivation, processing, manufacturing, distribution and lab testing on the Navajo Nation. The license applications must be accompanied by a $500 application fee and licensees must sign a non-disclosure agreement with NAAC.

According to Benally, hemp production has been legal on the Navajo Nation since 2000, when the Navajo Nation Council passed a resolution distinguishing between hemp and marijuana. At the time, hemp was considered cannabis with less than 1.4 percent tetrahydrocannabinol, or THC, the psychoactive ingredient. The 2018 Farm Bill lowered that amount to 0.3 percent, and the Council adopted that change last year. The bill deregulated industrial hemp and gave Native American tribes the authority to regulate and produce it.

In the press release, Benally contends the San Juan River Farm Board, acting as a unit of the Navajo Nation government, developed the regulations. Nez said Tuesday the farm board is not authorized to act as a proxy for the tribe, and the Navajo Nation Council is working with the Navajo Agricultural Products Industry to develop regulations and a pilot hemp production project.

Although its only FDA-approved use is for the treatment of epilepsy, CDB oil has been touted as a remedy for everything from arthritis to anxiety. According to statista.com, Americans spent $513 million on CBD products last year and that number is anticipated to increase to $1.2 billion by the end of this year.