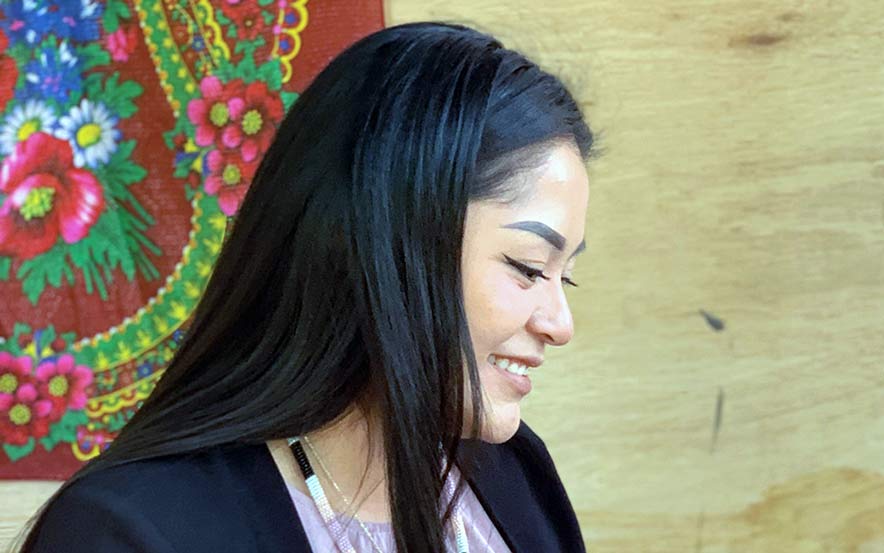 Navajo Times | Pauly Denetclaw
Alicia Nequaptewa, 22, has only recently come to terms with being bi-cultural. Her father is Hopi and her mother is Navajo.

(Editor’s note: This is the first in a series of stories about the impact of relocation on the children and grandchildren of relocatees.)

Alicia Nequatewa, 22, has spent her whole life trying to meld together two communities that in the past had a contentious relationship.

Naquatewa, an educator, graduate student and artist, is Navajo and Hopi. She is also part of the second generation of people who have to deal with the aftermath of the 1974 Navajo-Hopi Land Settlement Act.

Nequatewa’s two nations were in a land dispute that resulted in Congress passing the law, which awarded Hopi Pueblo half of the disputed 1.8 million acres. However, the land dispute had been going on for decades before the final decision was made. The dispute was stoked by the livestock reduction program that created District 6 for exclusive use by Hopi. Then, through the influence of mining corporations that were interested in the resource-rich community of Black Mesa, Arizona, according an article by John Redhouse, a scholar and activist.

In District 6, which in 1943 was enlarged by 20,000 acres, grazing permits were given only to Hopi citizens. However, Navajo citizens had already been grazing their animals and living on part of the 631,000 acres. This resulted in the first forced relocation of about 100 Navajo families from the District 6 disputed area. Before that in 1909, mining corporations found coal on Black Mesa and some 30 years later it was determined to be home to “21 billion tons of accessible coal,” according to an article by Redhouse.

This was in addition to the untapped oil, natural gas and a vast underground water source. This prompted the companies to explore who owned the land and mineral rights. The answer? The Navajo and Hopi nations co-owned the rights.

Wanting a more concrete answer, the tribes went to battle for ownership over the land through lawsuits and eventually to Congress. Ultimately, the land was split 50/50 between both nations through the passing of the settlement act. The passing of the act meant that about 12,500 Navajo families from the Big Mountain and Black Mesa areas were forced to relocate. Some 500 refused to leave.

Today, the next generation is still dealing with the aftermath of the federal government’s decision. For Nequatewa, it resulted in feeling rejected by her Navajo community. “My mom comes from Hard Rock and my dad comes from Hotevilla,” Nequatewa said. “They’re very, very close in proximity and there’s a lot of that tension between the grazing areas specifically. That’s what I experienced.”

Nequatewa, who has a Hopi surname, attended a mostly Navajo boarding school on the Navajo Nation. “People picked on me for being Hopi,” she said. “I was like one of three people in the entire school that were Hopi, the rest were all Navajo.” Navajo students didn’t like her because she was also Hopi.

“We received a lot of comments on being Hopi,” Nequatewa said. “I was called multiple names. People would say, ‘Oh, you guys took our cows. You do this and you take that and you’re like this.’ I never really knew where that was from.” These interactions caused her to move away from learning Navajo culture. “So that turned me away from my Navajo side because it made me feel rejected,” she said. “It wasn’t my fault. I didn’t participate in it. So I didn’t understand why I was being treated that way.”

This is why Nequatewa doesn’t know more about her Navajo side. “It just led me to not be so interested in the language and the culture,” she said, “almost rebellious to learning it. Once I became more aware of the importance of just culture in general, I started to really embrace it a lot better.” It was vivid dreams that Nequatewa had during her sophomore and junior years that prompted her desire to learn more about both her cultures.

Nequatewa was dreaming of losing cultural carriers from her family and other people she didn’t know but saw in her dreams. This stirred in her a desire to take her place as a Diné woman from the ‘Áshiihi Clan as well as a Hopi woman from the Beaver Clan. “I, myself, have found both cultures to be very empowering,” she said.

As Nequatewa got older she was told stories from her Hopi grandparents about how the relationship between the two tribes was originally. “They used to do a lot of trading between my two communities,” she said. “My great-grandparents on my paternal side and my maternal grandparents actually used to do a lot of trading before my parents got together. “There are those connections and we forget that because of this artificial issue that was created,” she said. “It wasn’t even the Hopi and the Navajo who created this issue. It was the U.S. government who created these boundary lines.”

Through her studies as an Indigenous scholar and praying on the issue, Nequatewa has reconciled her identity and understands the importance of being intertribal. “The importance of Indigenous knowledge regardless of what tribe it is, is important to know and pass on,” she said. “I think that’s how it really has impacted me.”