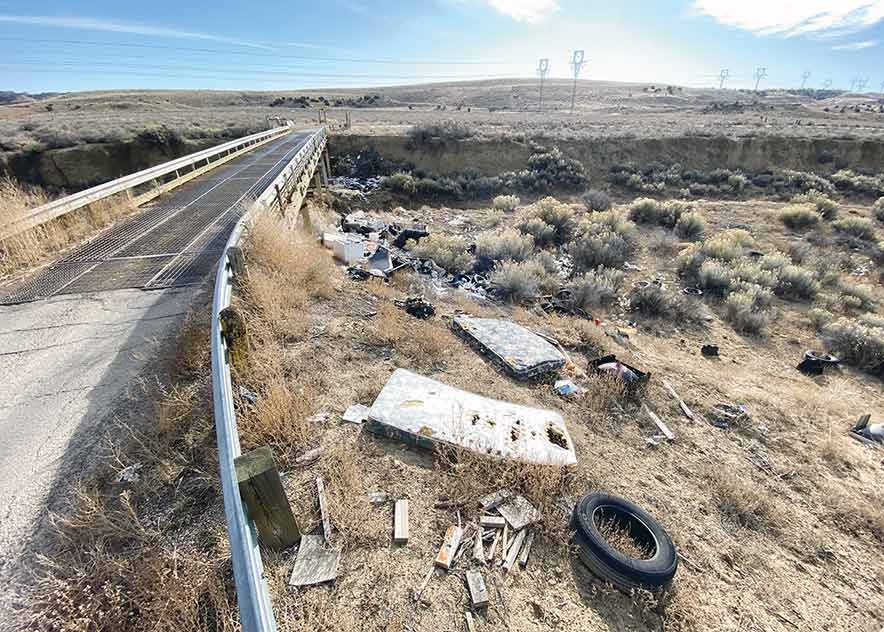 Navajo Times | Donovan Quintero
Piles of trash, including an old mattress and a tire, fill a ditch near Tseyatoh, N.M., along County Road 1 north of Gallup.

Pliny Draper estimates the five-and-a-half-acre illegal dump site near his home in Del Muerto, Arizona, is older than he is.

“My uncle told me people started dumping there when they built the windmill,” Draper said. “That would make it about 70.”

During his lifetime, the dump has always been there, although when he was a kid it was much smaller and the trash was more benign: animal bones, tin cans, bedsprings and such.

Today, there is a lot of plastic, leaking containers of pesticides and herbicides, and corroding appliances. He worries the dump might be leaching toxins into the water table and asbestos flakes into the air.

“The people who dumped that stuff, they’re in the graveyard,” he said. “We’re the ones paying for it. And the stuff that’s being dumped right now, our grandchildren are going to be paying for it.”

As far as Draper knows the Navajo Nation government has never attempted to clean up the dump. A few years back, a neighbor’s son came out with a backhoe and buried some of the trash and hauled some away, but now it’s back to about the size it was before.

A couple of years ago, during the Russell Begaye administration, Draper went to the Navajo Nation EPA to complain about the site.

“They had me fill out a form and then I never heard from them,” he said. “That was when Dr. (Donald) Benn was in charge. Now there’s a different guy in charge, so I don’t know what happened to my complaint.”

(That guy would be Oliver Whaley, who did not return two phone calls. Neither did two other people at NNEPA.)

The most likely explanation for NNEPA’s non-responsiveness is the sheer volume of the problem. The site near Draper’s home is hardly the only eyesore on the Nation.

If each of the 110 chapters has 10 illegal dumps, which is probably conservative, there are 1,100 illegal dumps on the Navajo Nation and, the last time we reported on this issue, three enforcement officers.

The Jonathan Nez administration has taken some tentative steps to address the issue, announcing last August the prosecution of illegal dumpers in Black Mesa, Arizona, and then last month applying Criminal Enforcement Division seals on all NNEPA’s enforcement vehicles, presumably to make them look more threatening.

Nez has long spoken about plans for the Nation to have its own dump (to date there are only transfer stations from which the garbage is hauled to off-reservation facilities), and this year assigned the divisions of community development and economic development to work together on a strategic plan for the landfill.

This does not impress Draper, who, as an architect, has seen his share of plans.

“Master plans, often, that’s as far as they go — plans,” he said. “They don’t really take action on it.”

The problem is not unique to the Navajo Nation. Gayle Green, who lives on Mentmore Road near Tsayatoh, has been fighting for years with McKinley County, trying to get the county to clean up a large illegal dumpsite under the Tsayatoh Road bridge, where the county controls the right-of-way.

She partially blames the Navajo Nation, saying that some Navajos dump their trash illegally because they can’t afford the fees at the transfer stations.

“I ran into a Navajo woman at the Gallup landfill,” Green said. “She said she was from St. Michaels, but she drove to Gallup because the St. Michaels transfer station wanted $200 to dump a truckload of trash.”

That may have been a bit of an exaggeration, but not much. A call to St. Michaels Chapter revealed the chapter charges $8 for a garbage-can-liner-sized trash bag full of household waste. So 23 bags would cost approximately $200.

But lower fees don’t necessarily discourage people from dumping. In Draper’s chapter, Chinle, it only costs $3.18 to dump a 55-gallon trash bag, but the chapter still has one of the worst illegal dumping problems in the Navajo Nation.

“I honestly don’t know who’s dumping all the trash,” said Daryane Begay, administrative assistant to Chapter Manager Walton Yazzie. “Everyone who comes in here complains about it. Everyone in Chinle lives near an illegal dumpsite.”

The chapter, which got certified several years ago, has been trying to pass a tax ordinance so it can put some dollars toward carrying out its master plan, which prioritizes waste management. In the last special election, a majority of residents voted for the tax increase, but it didn’t get the supermajority it needed to pass.

“We’re going to word it differently and try again in the next election,” Begay said.

In the meantime, the chapter has been applying for grants to sponsor community cleanups, and on Earth Day, opens its dumpsters for free to any kind of debris, including appliances and furniture (the transfer station normally only takes household waste).

Meanwhile, out west in Tó Nanees Dizí, the certified community governance has found that even making its transfer station free has not had much effect.

“People still dump illegally,” said Harold Nez, the community’s project manager. “Why, I do not know.”

Since the community became certified and started collecting taxes, it has taken an aggressive stance toward garbage. In addition to the free transfer station, which accepts everything except electronics and refrigerators, it has recycling bins for metal, plastic and cardboard.

For one dollar apiece, you can even leave tires.

Every three months, the community targets a different illegal dump site and invites its members to come help clean it up, with a free lunch, water and commemorative T-shirt as incentives.
“It used to be really popular, but now it’s slowing down,” Nez said.

Other chapters have come up with their own solutions. Baahaali recently partnered with McKinley County and its neighboring chapter, Chichiltah, to create a transfer station.

But on a Nation-wide level, Draper is losing hope that the problem will be addressed in his lifetime. He worries about his and his livestock’s health living so close to the monster unofficial landfill.

“It’s gotten so bad, I’m actually thinking about moving,” he said. “You can see the thing from Google Earth. I look at it and it makes me sick.”