Jevon “Chewie” Descheenie was laid to rest on Feb. 16 in Rock Point, three months after being found face down in a canal on Nov. 12, 2021. 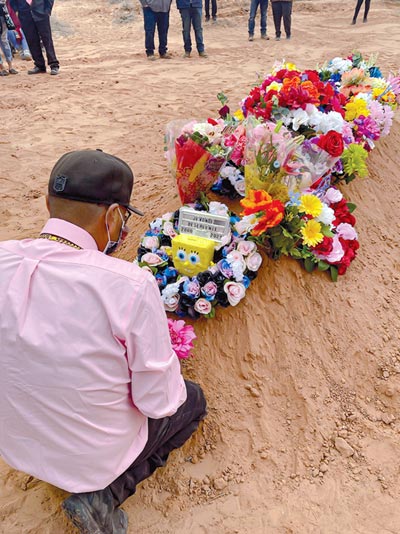 Courtesy photo
The funeral for Jevon Descheenie was Feb. 16 in Rock Point, Ariz., after the family waited for three months for his body to be released from the Office of the Medical Investigator in Albuquerque.

The family of 21-year-old Descheenie is looking for justice surrounding his untimely death.

Descheenie’s body was held at the University of New Mexico’s Office of the Medical Investigator.

The autopsy report was released to the Navajo Times, and cultivation of the report reads:

“The exact sequence of events regarding how Mr. Descheenie’s body came to rest in a water canal is unclear.

“He may have fallen into the canal water while attempting to avoid law enforcement and was unable to extricate himself given his intoxication and physical restraint (handcuffs). Mr. Descheenie had multiple non-specific findings of drowning.

“Moreover, the ambient temperature near his location had a documented low of 42 degrees Fahrenheit. Mr. Descheenie’s limited clothing and body habitus would have predisposed him to hypothermia.

“Thus, Mr. Descheenie likely died as a culmination of many factors, including drowning, the cold temperatures, being intoxicated, and the fact that his hands were restrained by handcuffs.”

The report went into detail about the status of Descheenie’s body, how his body was found less than a mile from the Shiprock Police District two weeks later and indicated that the death was ruled an accidental drowning.

Shannon Nez, Descheenie’s sister, expressed her thoughts on her brother being held at the Office of the Medical Investigator at UNM in Albuquerque, and losing faith in law enforcement.

“The crazy thing is we haven’t heard anything until Feb. 11,” Nez said. “The Medical Investigator I was transferred to was not the one we started off with.

“The Medical Investigator told me the autopsy report over the phone, cause of death, other factors, and how he initially passed.

“One of the main things that myself and my family were really wanting to know––was he still handcuffed? The Medical Investigator told me, yes; he was still handcuffed,” Nez said.

“Hearing all these things, being found less than a mile from the police department, knowing that the hospital is just right across the street. How did they (NNPD) neglect searching for my brother?”

“Do they really follow them?” Nez asked. “The main thing we want to do is get justice for my brother.

“Who all is responsible for this? We want the Navajo Nation to come up with a better plan; better policies and procedures on what to do properly,” she added. “So no other family goes through this. That’s what we mainly want, just pushing this to the side isn’t going to be helpful to anybody.”

Nez said she’s angry with the Navajo Nation Police because of their lack of communication and training. She and her family have been active advocates of the Missing and Murdered Indigenous Peoples movement.

“Navajo Nation Police have not said anything to us, nor has the Navajo Nation president reached out to us,” she said. “I don’t know how they are looking at it or how they are viewing it, but some things need to change!”

Nez went on to say that whenever she and her family went to the police district for answers, personnel would ask for the handcuffs or inform them that Jevon isn’t in trouble.

“It’s sad to say that my brother is not the only one that has had this happen to them,” she said. “Doing all these rallies, all these walks, talking to others, being part of the (MMIP), we hear many stories similar to our situation.

“Some of them still don’t have justice for their loved ones,” she added.

No police, jail in Shiprock

Nez and her family were shocked to find out that the Shiprock Agency has no correctional facility nor a fully operating police station.

The Shiprock police station has not been in use due to unsanitary conditions and was deemed unsuitable for future operational use and was closed.

The Shiprock Correctional Facility was in operation until May 2021 before being closed due to the sanitary issues. The facility was infested with mold, asbestos and had structural problems.

“You know, that is a surprising fact,” said Nez. “If somebody is in your custody, you should have a plan and procedure on where to take individuals before being concerned about vomit.

“To leave a person unattended by themselves, knowing that person is intoxicated and not in the right mindset, why would you leave that person alone?” asked Nez.

“This officer should have known that and taken him to a safe place before dealing with whatever he was dealing with,” she said. “He should have requested backup before leaving him unattended.

“There needs to be some changes in that policy,” she said. “Shiprock is one of the largest communities on the reservation. There should have been a detention facility there. What is the hold up with the no facilities being there?”

The closure of the buildings strained the Shiprock Police. The police department is now being operated in an old post office across from the Shiprock hospital.

Many of police officers transport prisoners to the Crownpoint Detention Facility, a two-hour drive that leaves the department without an extra officer for more than four hours.

Nez is currently working with a lawyer on the treatment of her brother. Nez hopes to implement policy changes within the Navajo Nation Police Department.

“That’s one thing we really like changed: taking care of someone who is in your custody,” Nez said.

The Navajo Times reached out to the FBI in Albuquerque and was given the following statement:

“The FBI is reviewing the death of Jevon Descheenie and is in touch with Navajo Nation authorities. This review is standard in these situations. Because this is an ongoing matter, no further information can be released.”

It is unknown what aspects of Jevon’s death are being reviewed or who the Navajo Nation authorities are at this time.

Navajo Nation Police Department Chief Daryl Noon told the Times Tuesday night that “based on the circumstances surrounding the death of Descheenie, I do not feel it is appropriate for me to comment until the external review by the FBI is completed.”

Descheenie was last seen on Oct. 25, 2021, when officers responded to calls of a highly intoxicated person in the middle median near the Shiprock Bridge of U.S. Highway 64.

Descheenie was transported to the Shiprock Police District, where an officer made reasonable attempts to identify a responsible party to release Descheenie to.

Officers began searching the surrounding area for Descheenie and expanded their search away from the police building and to the main road corridors over several hours. Officers were also able to identify relatives and made them aware of Descheenie’s escape. After failing to return home, the family reported Descheenie missing on Nov. 2, 2021, and he was entered in NCIC as a missing person.

The family of Jevon Descheenie hopes to implement new policy changes within the Navajo Nation Police Department and is working with their lawyer to ensure changes happen.

“This has gone on too far, way too far,” she added. “This is the time for change. Changes need to be made.”