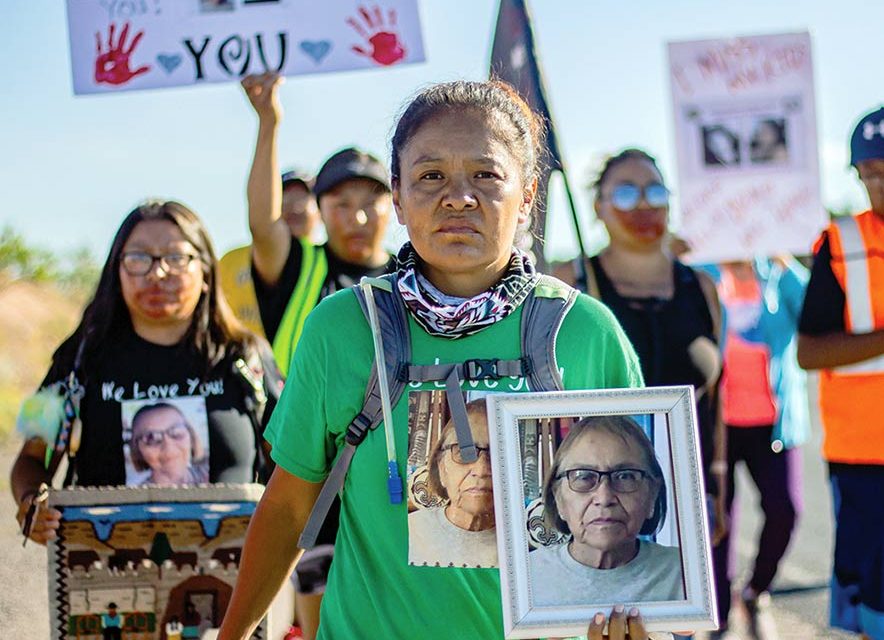 Navajo Times | Cyrus Norcross
Frustrated with the Navajo Nation Police and the Navajo Nation government, Seraphine Warren (green shirt) starts marching from Sweetwater, Ariz.. to Window Rock on July 20 to raise awareness about her aunt, Ella Mae Begay, as well asMissing and Murdered Indignous Women and Girls. Warren has questions that she wants answered from the Navajo Nation leaders.

A frustrated Seraphine Warren took a walk early one morning from her aunt Ella Mae Begay’s home in To?ikan, which was the last place her aunt was seen.

Her walk wasn’t just any walk – it was a walk of awareness and to get answers.

In a week’s time, she ended her trek in Window Rock on Monday.

On June 15, Begay was reported missing and for a 62-year-old woman who lived in one of the most remote areas on the reservation, the situation raised suspicion.

Warren said her aunt was cautious, with her house fenced off, and during the pandemic she did not allow anyone into her home.

Warren said for this to happen to her aunt, it had to involve someone who knew her.

“I don’t know who I was mad at the most,” said Warren, of all the factors as to why she believes her aunt’s case was mishandled. “I was mad at the police officers, mad at my cousin sister for not doing anything to save her, I was mad at my aunt and the person of interest that’s in custody. I was mad at everyone. How do I feel better from all of this … so I started walking.”

For the past month, Warren has devoted her time to staying on the reservation rather than going home to Utah, where she lives and works.

Before she decided to walk on July 19, she said she was at her uncle’s talking about Begay and trying to think of where she could be.

“I just told him, ‘I’m going to walk,’” said Warren. “I’m going to walk to the police station and see why they haven’t updated us on anything and to see if they’re even working on the case, and I’m going to Window Rock.”

She remembers when she told her uncle about the walk, he responded by saying she would need protection.

“I told him my aunty didn’t have protection at all,” said Warren. “I’m going to walk just the way I am. I want to prove a few points that police officers don’t care.”

Warren said she rarely saw Begay but, when she did, she said Begay was caring, patient, creative, organized and cautious.

“She won’t shake your hand because she always hugged us,” said Warren. “You can tell when she hugs you she is telling you to take care of yourself because we wouldn’t be able to see her for awhile. She was always interested in seeing what her our family was doing.”

Although frustrated at certain family members for what she suspects as their involvement with Begay’s disappearance, the biggest frustration Warren and her family faced was with how the case was handled by the Navajo Police Department.

She said there was a lack of training, and no updates given to the family.

“When it came to the second week, we seen them around and from how it looked like they weren’t doing anything,” said Warren. “They were just driving around as the searching was going on and pretty much we were just lost from the get-go.”

The family had given the police leads but didn’t receive any updates. These leads, said Chief Phillip Francisco, were all looked into and came up with nothing.

“They keep saying we aren’t doing this, this, this and this,” said Francisco. “We’ve done all of that the first three or four days.

Francisco and his officers have taken a public beating from Warren, her family and Delegate Charlain Tso with the way they believe the case was handled.

Not only Francisco, but also President Jonathan Nez and his staff have received backlash, even after they met with Warren during the walk and greeted her when she arrived at the president’s office at the conclusion of her walk.

Francisco stands behind his officers’ work and said they have the proper training, spent $50,000 in the first 15 days looking for Begay, have been on this case from the beginning and now that it’s a homicide investigation and it’s in the hands of the Federal Bureau of Investigation.

“Like I said, they don’t understand or don’t want to hear what we’ve done,” said a frustrated Francisco. “We’ve told them several times, ‘This is what we’ve done.’

“From the very beginning we expended every resource available to us – plus,” he said. “When it went over to the FBI, we still did as much as we could. Every possible avenue has been exhausted.”

The road to Ella Mae Begay’s brother, Robert Curley, is far from the main road with no markings to indicate where to turn. The road is dirt.

A good rain or snowfall would turn the road into mud that would be difficult to drive through. Getting lost is a strong possibility unless you are from the area.

On July 22, Curley was adamant about having an update meeting at his home. So Nez, Francisco, Director of Human Resources Perphelia Fowler, two police officers, and one criminal investigator were the only non-family members who could find the home.

Criminal Investigation Director Michael Henderson and FBI agents weren’t so lucky and with no signal to help them get directions they decided to leave.

“I’m tired because of my sister,” said Curley. “Every since she disappeared from her house we are still thinking positive. We want to shake hands with my sister. I want to give her a hug.

“That’s what I think, but sometimes I cry,” he said. “It’s really hard to lose someone like this. My sister … she’s been stolen.”

At this meeting, the immediate family received an update regarding the ongoing investigation. But this wasn’t enough and nothing new was said, according to Warren.

“They just told us they can’t tell us nothing again,” said Warren. “But they did reassure us that they are working on it. They are looking into other leads.”

On Monday, Warren ended her walk with a group of supporters. There Tso expressed her own frustration with the Navajo Police and executive directors. As the family’s delegate, she’s helped with searches and raising awareness for the past month.

“It hurts so much when she went missing,” said Tso. “Why is there a slow response? Why is this happening?”

She also said the excuse of not enough officers should be resolved by allowing outside police departments to take over or help, which is a sentiment many delegates have voiced before.

To this, Francisco said outside police forces don’t have enough officers or resources either and their budget is tight and at times outside departments ask the Navajo Police for help.

“It’s not feasible,” said Francisco. “We just cross-commissioned 19 Arizona DPS officers so that they can continue to do their job, because they have barely enough people.”

Besides Tso, not much has come from other delegates. Francisco said the lack of support from Council to his department is severe.

During the CARES Act funding process, he spoke with delegates and the speaker about the possibility of buying a helicopter to help with missing people cases like these. This would’ve cost over $17 million.

“We discussed it and they actually verified this was what we needed,” said Francisco, who said buying a helicopter would’ve met CARES Act funding guidelines. “It was also submitted into an unmet needs for last year’s budget.”

But out of the $714 million CARES Act funding, NPD only received money to pay for hazard pay after having to pay his staff with other funds from other NPD contracts. He also said Council gave them money for personal protective equipment, but this was after they were able to get their own.

On the visits with Ella Mae Begay’s family, Nez was there only to listen and said he liked Warren’s suggestion to get surveillance cameras for the elderly, which she wants to call “Ella Cam.”

The person of interest in Begay’s case is Preston Tolth of Thoreau, New Mexico, who is believed to have known Begay.

Tolth had other charges from Farmington and if Nez did not sign extradition papers for him, Tolth would’ve spent only a few days in jail and then be released. The signing of extradition papers is something Nez has been doing in order to prevent criminals from hiding out on Navajo.

“I’m trying to keep our people safe,” said Nez. “Imagine if I didn’t sign this extradition paper, this individual would’ve walked free. Who would’ve known where he would’ve went? Now he’s incarcerated and being detained…because of sovereignty.”

Warren said during the update meeting at Curley’s house, she asked that her family not be forgotten. But she kind of doubts it.

“Update us like once a week at least,” said Warren. “That’s all we wanted from the get-go. That’s all we are asking, just to let us know you are still working on it. Instead of just going quiet. I’m not sure if that’s going to happen either.”