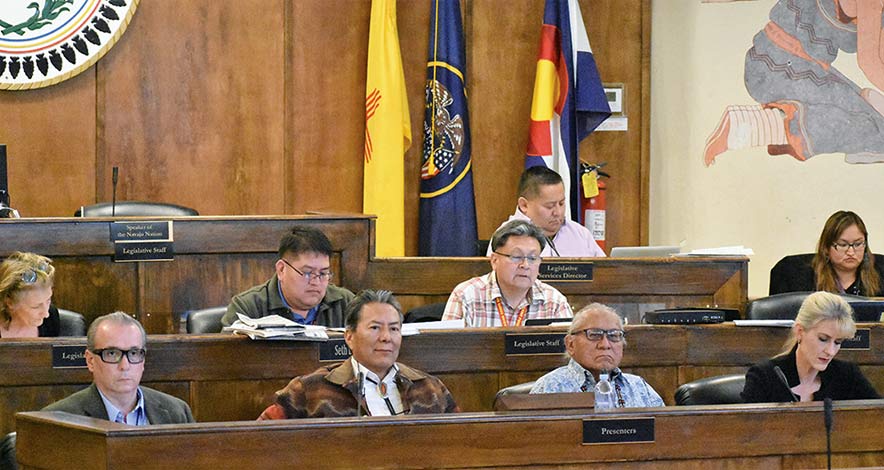 This means that Naat’áanii-Molina reps will likely soon be coming to your community to conduct outreach and education and the New Mexico Human Services Department will be poised to administer all Medicaid eligibility and enrollment activities.

“It’s a prospect that is one-of-a-kind because the Navajo Nation, through Naat’áanii Development Corporation, is going to be the first Indian managed care entity among all tribal nations across the United States,” said Delegate Daniel Tso, who sponsored the legislation.

“Even though there was great concern expressed by members of Naabik’íyáti’ Committee, in the end it received unanimous endorsement,” said Tso. “The summary statements with a lot of the committee members said ‘We have to approach it with hope and faith.’”

Last fall, New Mexico HSD Secretary David Scrase said that the proposed Naat’áanii-Molina IMCE could generate up to $470 million in annual Medicaid payments to the Navajo Nation. It is estimated that approximately 75,000 Navajos in New Mexico could be eligible for the IMCE program.

According to HSD, individuals currently enrolled in another Centennial Care 2.0 managed care plan will not be dropped from their plans and passively enrolled in the IMCE, but can sign up in the next open enrollment period.

Despite some of the unknowns that will still have to be worked out, Delegate Pernell Halona said he was sold on the idea when he saw the potential revenue and jobs that a Navajo IMCE could bring to the Nation.

“With the closing of NGS (Navajo Generating Station), we have to be creating options,” added Halona.

He’s also excited about the prospect of community reinvestment if the Naat’áanii-Molina IMCE is profitable that could help build infrastructure for new healthcare programs on the Navajo Nation.

“I think we just need to have faith in this program,” said Halona. “There are a lot of intricate parts that need to be adjusted, but we have to start somewhere. The only way to do that is to move forward now and then we’ll work on it as we move along.”

“Passive” enrollment will offer automatic enrollment by zip code on Navajo, with the option for enrollees to opt out afterwards.

“Active” enrollment would have required individuals to proactively apply for benefits through a Medicaid enrollment specialist.

All parties involved with the proposed Naat’áanii-Molina partnership, including Scrase, recommended passive enrollment because it is more efficient and economically feasible.

According to a Jan. 22 press release from the president’s office, President Jonathan Nez and Vice President Myron Lizer recently informed New Mexico Gov. Michelle Lujan Grisham of their support for the part of the bill that asks HSD to work with the Navajo Nation, Naat’áanii Development Corp., and Molina Healthcare to implement Medicaid services.

However, Nez and Lizer also informed the state that they strongly support “active enrollment” for Medicaid. This sets up a conflict that has yet to be resolved.

Naat’áanii and Molina officials stand by their belief that the option to opt-out after being passively enrolled protects enrollees’ freedom of choice.

Nez says the top priority for the administration is protecting the health plan options for Navajo people and his administration will continue to lead the way forward with that in mind.

He added that the Navajo Nation must be very careful in the development of healthcare policy to ensure that no negative impacts occur to the current Navajo health care system.

Additionally, Nez noted that nothing stops the Navajo Nation from creating its own Medicaid agency, which could bring in hundreds of millions more in revenue for the Nation that would otherwise be paid to Molina and NDC.

Meanwhile, Daniel Tso says the passage of his legislation through Naabi is now the proverbial law of the land and overrides the president’s preferences.

“The main thing is that the Naabi legislation specifically addresses passive enrollment. Since we did adopt this legislation, that is now the Navajo Nation position,” said Tso. “President basically has to administer that. Naabi is the final authority.”

“This is a new dawn for Navajos,” said Delegate Mark Freeland. “After many years of advocating for a Navajo managed care organization, I am thrilled that we are seeing this come to fruition. This not only brings economic benefits to the Nation but also opens the door for us to develop and tailor our healthcare programs to what Navajos need and want.”

Scrase said the IMCE program would cater to Navajo by prioritizing prevention and wellness, case management and care coordination, and customizing programming to mitigate health disparities.

Once enrolled, Naat’áanii-Molina IMCE members will have access to Molina’s provider network as well as services they already use such as Indian Health Service, and tribal and urban Indian health care providers.

Delegate Paul Begay said that if all goes well with the IMCE in New Mexico, it will likely be expanded into Arizona and Utah.

“The pitch that Molina has is ‘We will do good,’ that it’s going to be a win-win situation. I am in favor of that,” said Begay. “I want to see how it goes, and if what they’re saying will work.”

A Molina report outlines that HSD will monitor compliance with contractual requirements for the IMCE.

NDC CEO Robert Joe confirmed that Molina will handle the more technical aspects of the operation while NDC will manage administrative functions, including government affairs, marketing and public relations. He estimated that the combined staff to run the IMCE will total 200 employees.

Delegate Charlaine Tso said that she’s looking forward to the “endeavors that are forthcoming” with the passage of the legislation.

“Money will be channeling back through our Navajo Nation,” said Charlaine Tso. “The health of my people is top priority for me, and I will support initiatives and legislations that will provide great care and service. This is a fine example of utilizing our sovereign right to manage our health care services.”