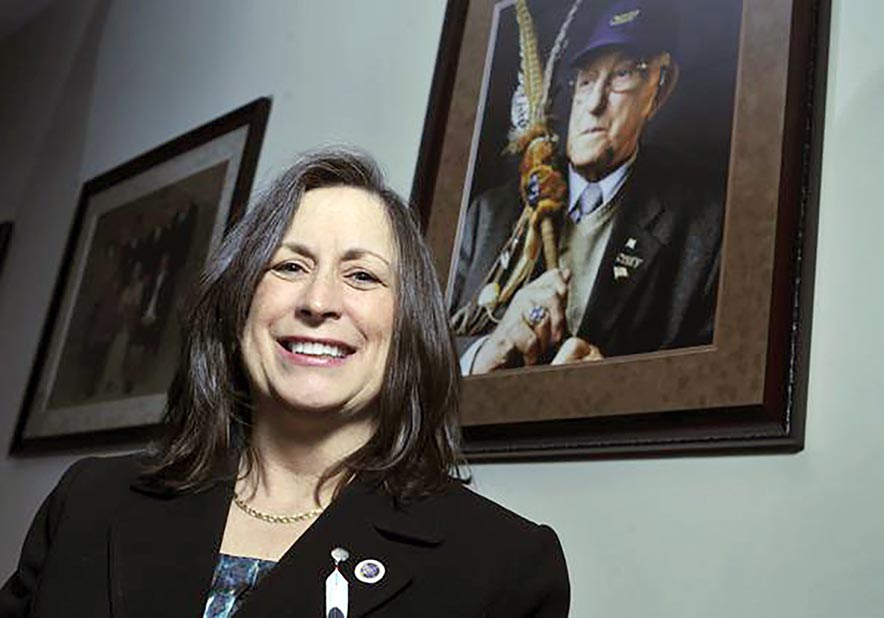 AP Photo | File
Marilyn “Lynn” Malerba stands next to a photograph of late chief Ralph Sturges at tribal offices in Uncaseville, Conn., on March 4, 2010. Malerba., who is Native American, was nominated by President Joe Bide to be U.S. Treasurer in a historic first on Tuesday.

A Native American is being appointed U.S. treasurer, a historic first.

The White House on Tuesday announced President Joe Biden’s intent to appoint Marilynn “Lynn” Malerba as his administration establishes an Office of Tribal and Native Affairs at the Treasury Department, which will be overseen by the U.S. treasurer.

The treasurer’s duties include oversight of the U.S. Mint, serving as a liaison with the Federal Reserve and overseeing Treasury’s Office of Consumer Policy. The treasurer’s signature appears on U.S. currency.

Malerba, who is the lifetime chief of the Mohegan Tribe, previously worked as a registered nurse, according to the tribe’s website, and has served in various tribal government roles.

The tribe’s reservation is located on the Thames River in Uncasville, Connecticut.

“For the first time in history, a tribal leader and Native woman’s name will be the signature on our currency,” Treasury Secretary Janet Yellen said in remarks prepared ahead of the announcement.

“Chief Malerba will expand our unique relationship with tribal nations, continuing our joint efforts to support the development of tribal economies and economic opportunities for tribal citizens,” Yellen said.

Biden also issued the first presidential proclamation of Indigenous Peoples’ Day, with the intent of refocusing the federal holiday previously dedicated to explorer Christopher Columbus toward an appreciation of Native people.

“It is especially important that our Native voices are respected,” Malerba said in a statement. “This appointment underscores this administration’s commitment to doing just that. I am excited to serve our communities as treasurer and for the work ahead.”

Meanwhile, the electricity at the observatory has been shut down and employees evacuated on Thursday. The fire has reached Kitt Peak Road after being fueled by dense shrub.

A post from the observatory’s official Twitter account says firefighters are working to assess possible damage. It also shared a photo from an observatory camera. It shows a long, orange trail of frames on a peak along with huge plumes of smoke.

It had grown to 18 square miles and there is zero containment.

More than 300 firefighters along with five helicopters are working on containment.

The lightning-caused wildfire was first reported June 11 roughly 20 miles east of Sells. It started on a remote ridge of the Baboquivari Mountain range.

Firefighters said they were hoping for more favorable weather conditions into the weekend.

In Louisiana, Native Americans struggle to recover from Ida

ALONG BAYOU POINTE-AU-CHIEN, La. (AP) — Driving through her village along the southeastern Louisiana bayou, tribal official Cherie Matherne points out remnants of house after house — including her own — wrecked nine months ago when Hurricane Ida roared through the Pointe-au-Chien Tribe community.

Trailers from the Federal Emergency Management Agency and travel campers sit next to pilings that elevated homes 14 feet off the ground to protect them from flooding.

But the wind got them this time. For hours, the Category 4 hurricane tore off roofs and siding, ripped out insulation and scattered treasured belongings.

“It’s going to take years before people can get back to their lives. The majority of people are still at a standstill,” said Matherne, the tribe’s cultural heritage and resiliency coordinator.

When Ida barreled through southeast Louisiana on Aug. 29, it slammed into an area home to many Native American tribes, battering people already struggling to overcome decades of coastal erosion and the long shadow of discrimination.

With the start of a new hurricane season predicted to be as busy as the last, tribal officials worry their people could be in the crosshairs again.

“Ida was the worst storm we’ve ever had in our area,” said August Creppel, chief of the United Houma Nation.

The tribe’s roughly 19,000 members are spread across coastal Louisiana, about 11,000 of whom experienced some sort of damage from Ida, according to Creppel.

“Some of our people don’t even have a house to go back to,” he said.

Other tribes in southeastern Louisiana also were hammered. Pointe-au-Chien Indian Tribe member Theresa Dardar said only about 12 homes in the lower part of the Pointe-au-Chien community actually survived the storm.

Farther west, where many members of the Grand Caillou/Dulac Band of Biloxi-Chitimacha-Choctaw live, Chief Shirell Parfait-Dardar said everyone had some sort of damage, with about 20% of homes a total loss, even her own.

Native Americans have lived in the southeastern Louisiana bayou regions since long before French explorer Rene-Robert Cavelier reached the mouth of the Mississippi River in 1682. Historically, they have been intimately tied to the land and water there.

Many make their living shrimping or crabbing in the marshes and estuaries; their parents and grandparents trapped muskrats or nutria.

The Anderson Community Schools’ athletic teams will continue to use the Indians name and logo, but the pipe routine performed before Anderson High’s basketball games is being eliminated immediately under recommendations unanimously approved June 14 by the district’s school board.

Superintendent Dr. Joe Cronk proposed the changes, which include moving toward initiating a formal partnership with the Delaware Tribe of Indians to modernize some of the district’s most visible traditions.

The district formed a task force this year to review how it represents the Native American history of the city of Anderson, which is named after William Anderson, a former chief of the Delaware (Lenape) Tribe.

That review came after a widely-viewed video posted to TikTok in February showed the pregame routine, where a student dressed as the school’s American Indian mascot and another dressed as an American Indian maiden perform a dance and a peace pipe is passed among the team’s cheerleaders.

The video prompted hundreds of people to contact the school and school board to share “concerns, support, and feedback,” according to the school’s internal review, WXIN-TV reported.

“Really, all the comments that we had cluster around the dance and the peace pipe ritual,” Cronk said.

The district’s review states that, “From the start in 1925, the intention behind the Indian symbol at Anderson High School has been to honor Native Americans.”

But Cronk said Native Americans had told the district that the pregame pipe ceremony was inappropriate.

“The Delaware tribe of Indians and most Native American tribal members have made it clear through this process that having students or any non-native individuals dressing up in Native regalia and performing routines and ceremonies that they hold as a sacred component of their culture is in no way honoring them,” he said.

Members of the American Indian Movement who attended the June 14 meeting said that eliminating that pipe routine wasn’t enough, The Herald Bulletin reported. They spoke in favor of abandoning not only the pregame routine but also the Indians name and logo.

KANSAS CITY, Mo. (AP) — A Missouri man and others broke into a prehistoric Native American archeological site and used shovels, rakes and other tools to dig up artifacts, causing hundreds of thousands of dollars in damage, according to a federal indictment.

Johnny Lee Brown, 70, of Clinton, Missouri, was charged in an 11-count indictment filed April 26 but unsealed and made public on June 14.

The indictment alleges that Brown, two known co-conspirators and others, excavated archeological items from federal land at Truman Lake near the town of Tightwad, Missouri, at least 10 times from June 2016 through September.

The site is managed by the U.S. Army Corps of Engineers and located on a peninsula. It dates to the Late Archaic Period, 3,000 to 5,000 years ago.

The indictment states that the findings indicate it was used as a camp site, as a location for stone processing, or both.

The suspects allegedly used small handheld trowels, shovels, rakes and hoes, and used buckets and backpacks to take items away from the site. The indictment does not state what Brown and the others allegedly did with the taken items.

The illegal excavation caused more than $300,000 in damage, the U.S. Attorney’s office in Kansas City said.

Smudging is the cultural practice of burning sage or other sacred herbs for healing and to cleanse the soul of negative thoughts.

Smudging is already taking place on an informal basis at some St. Paul schools, but supporters want to develop an official policy.

In a presentation to school board members June 14, John Bobolink, supervisor of the district’s American Indian Education Program, said that during a smudge, cedar, sage or sweetgrass is placed in a shell or container and ignited. The flames are gently blown out, creating wafting, cleansing smoke.

Leonard Spears, a Johnson Senior High freshman, said smudging is a source of positive energy and he tries to do it daily.

“It is a cleanser,” Spears said. “It is a medicine for the mind.”

Supporters say it’s a way to create a sense of belonging for Native American students who make up about 3.7% of the school district’s population.

District officials say smudging could help students who struggle with test anxiety, or aggressive behavior, or who are fighting to overcome trauma, the Star Tribune reported.

A policy draft says smudging can be done at an event such as a powwow or cultural presentation, or with a student or group of students with a counselor or Indian Education staff member present.

Native children’s remains to be moved from Army cemetery

CARLISLE, Pa. (AP) — For more than a century they were buried far from home, in a small cemetery on the grounds of the U.S. Army War College. Now they’re heading home.

The Army began disinterring the remains of eight Native American children who died at a government-run boarding school at the Carlisle Barracks, with the children’s closest living relatives poised to take custody.

The disinterment process, which began two weeks ago, is the fifth at Carlisle since 2017. More than 20 sets of Native remains were transferred to family members in earlier rounds.

The children had lived at the Carlisle Indian Industrial School, where thousands of Native children were taken from their families and forced to assimilate to white society as a matter of U.S. policy — their hair cut and their clothing, language and culture stripped.

More than 10,000 children from more than 140 tribes passed through the school between 1879 and 1918, including famous Olympian Jim Thorpe.

“If you survived this experience and were able to go back home, you were a stranger. You couldn’t even speak the language your parents spoke,” said Rae Skenandore, of the Oneida Nation in Wisconsin.

She is a relative of Paul Wheelock, one of the children whose remains will be disinterred.

The off-reservation government boarding schools — Carlisle was the first, with 24 more that followed — “ripped apart tribes and communities and families,” said Skenandore, adding she lost part of her own culture and language as a result. “I don’t know if we can ever forgive.”

She and her mother, 83-year-old Loretta Webster, plan to make the trip to Carlisle later this month.

Webster said her own father ran away from a similar boarding school in Wisconsin when he was 12.

“It was like a a prison camp, what they were putting these little kids in,” Webster said. “It’s a part of our history that’s really traumatic and still affects the community today.”

The children to be disinterred came from the Washoe, Catawba, Umpqua, Ute, Oneida and Aleut tribes.

The sex and approximate age of each child will be verified, according to Renea Yates, director of the Office of Army Cemeteries, with archeological and anthropological support from the U.S. Army Corps of Engineers.

The small cemetery has been enclosed with privacy fencing during the disinterment process, which is expected to conclude in July.