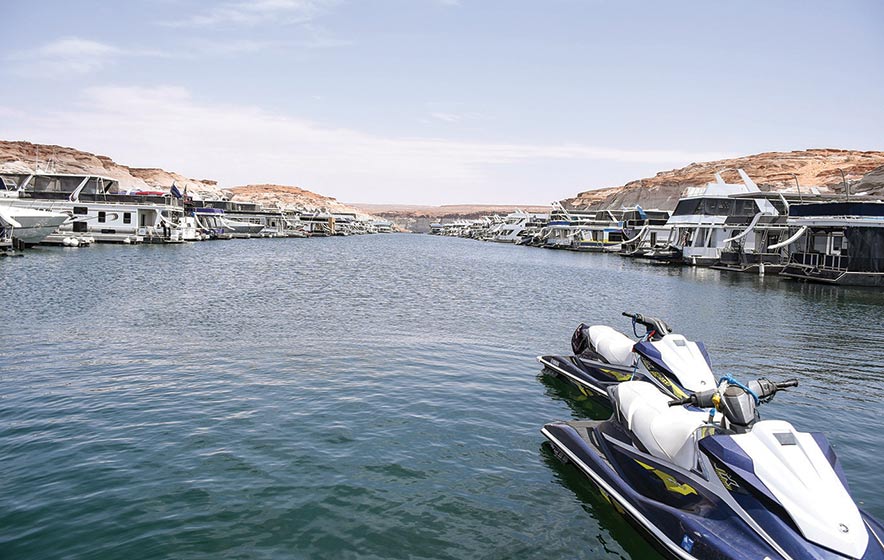 “In every way possible,” said Melvin Schoppmann, director of business development at APM in Jádí Tó near Łichíi’ii, Ariz. “They’re not supporting it and not allowing it to support itself.”

Schoppmann said he and Kenneth Runnels, the administrator at APM, told park service officials the marina needs improvements and that it would pay for them directly.

These improvements include upgrades to launch ramps, walkway ramps, and utility lines for low water levels that affect the floating marina on Tooh Bikooh, the Colorado River.

“Still, they declined that,” Schoppmann said. “It’s not a matter of money, there’s some underlying reason that they’re arbitrarily attacking this project.

“What that is, I don’t know,” he said. “I have my suspicions, but that’s all they are. But the attacks are blatant and documented, and that’s where we’re at.”

Speaker Seth Damon said the Navajo Nation had economic investments in the Dá’deestł’in Hótsaa region, including APM. He said the lack of communication between the park service and the tribe concerns him and his fellow Diné lawmakers.

Damon said the park service is continually delaying and not permitting fundamental upgrades that operate the marina.

Jádí Tó is a unique site north of Dá’deestł’in Hótsaa, and it includes over 600 acres on Diné Bikéyah. 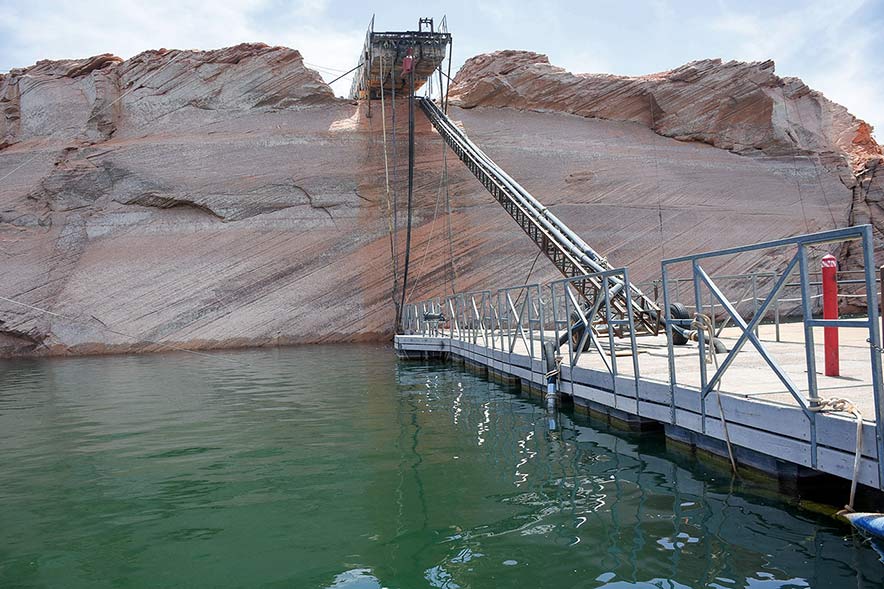 Navajo Times | Krista Allen
Cables from the walkway hang off an edge as the water level decreases at Antelope Point Marina on Lake Powell. The walkway led to the marina’s floating marina village. The reservoir has plummeted to its lowest level on record amid more than 20 years of record-breaking drought.

The floating marina village is inspired architecturally by the hooghan with its doorway toward ha’a’aah.

“The purpose of this particular marina is to create Navajo jobs and Navajo economics,” Schoppmann explained. “That’s why it’s here, and it’s referred to as a Navajo site.”

The Nation and the park service March 2001 selected Paradise Valley, Ariz.-based Antelope Holdings LLC to develop and operate the $75 million marina and resort.

This project is in dual status, with part of the project on Navajo Nation trust land under the lease and the other on park service land governed by a NPS concession contract.

The dual status requires many cooperative agreements between the Nation and numerous federal agencies to adequately carry out a single project under two different governments, jurisdictions, and contracts.

There are three agreements relating to the marina’s administration, specifically Glen Canyon NRA and Navajo lands.

These agreements allow for the Nation and the park service to enable APM to maximize its revenue and investment, among others.

In the 1950s, Chairman Paul Jones requested recreational planning assistance with the coming of the reservoir. At that time, he wanted to know what opportunities would be for Diné.

Schoppman said there were multiple potential marina sites on the Navajo side of the reservoir, and APM was one of those potential sites.

There were a couple more sites: near Padre Bay, on Tooh Biką’í – the San Juan, and in Forbidding Canyon near Tsé’naa Naní’áhí, Utah.

“Navajo has a boundary that is kind of disputed between the park service and Navajo – all the way from the confluence of the Little Colorado River and the Colorado River, all the way up to Mexican Hat on the San Juan,” said Schoppmann, who did extensive research on the Navajo site.

This means that there are hundreds of shorelines, and whether the Nation or the park service managed the potential marina sites when they were considered, the decision would have been up to the Navajo Nation Council.

The 1962 memorandum of understanding between the Bureau of Reclamation and the park service suggests that the lands around Tsé’naa Naní’áhí were “Parcel B” lands, allowing for tribal approval of all recreational facilities in Parcel B, laying 3,720 feet above sea level.

“This particular site is a little bit different than the situation,” Schoppmann said. “But any of the marinas that would be on Navajo’s western boundary, it turns out the full pool is 3,700. So, that mistake by the Bureau of Reclamation, it appears was weaponized by the park service to prevent Navajo from thinking they had the shoreline. That’s the backstory.”

The lands at Antelope Point are principally held in trust by the U.S. for the Nation. Public Law 93-493 transferred the Page townsite from the Bureau of Reclamation and permitted its incorporation, according to the marina and resort development project’s March 2002 environmental assessment.

The same act authorized the transfer of Antelope Point lands lying above 3,720 feet back to the Nation and lands below 3,720 to the Glen Canyon National Recreation Area.

The action was accomplished by Public Land Order 5687.

Schoppman said the Nation should fully control the marina.

“I think that has to do with the elevation,” said Schoppmann. “Because if you look at the resolution the Council passed, it created and established the tribal parks.”

But this was not a situation the park service wanted to wade through. The history of the non-Native and Native relations over land and water rights in the Southwest is not a history that favors the park service.

The Nation was in an advantageous position, bargaining with access to Tsé’naa Naní’áhí in exchange for boat and tour concessions along the reservoir’s southern shore, according to Legislation 0157-14, which former Delegate Mel Begay sponsored.

For 65 years, the Nation and its leadership have sought to capitalize upon the recreational opportunities of the roughly 370 miles of the southern shoreline. The Nation and its partners have been employing Diné and pursuing economic development since the 1960s.

The Antelope Point Marina site was part of the original trade for the city of Page to build the Glen Canyon Dam.

“In the early 1970s, when it got done, they (officials) realized, ‘OK, we’re not going to need this piece,’ so they offered it to the city of Page to do a marina here,” Schoppmann said. “At that time, there wasn’t enough business, and there was already a marina at Wahweap (near the Arizona-Utah border). It didn’t make sense to build a marina here.

“They asked Navajo if they wanted this land, so they did it,” he said. “So, Navajo actually bought this land from 3,700 (feet).”

That 3,700-feet line – the Glen Canyon NRA/Navajo Nation boundary – is near the main APM office.

“From that line, all the way to the highway was given back to Navajo in exchange for the water,” Schoppmann explained.

But the Nation didn’t get to the water, and it got 3,720 feet instead of down to the water.

The three agreements, including the quadrilateral agreement, expired last year in September.

“Navajo retained two rights to all of this land that they exchanged: mineral rights and recreational facility oversight,” he said. “The act says the tribal Council has oversight.”

The Council in 2018 passed an emergency resolution to prohibit outside businesses to the APM site because the agreements suggest that one operator would provide the design, development, and operations.

“It says, ‘single operation’ would perform all of that,” Schoppmann said. “That was in violation. Yet on Jan. 1, 2019, the park service started doing that, and they have been, and there have been outside businesses.

“For the last few years, the park has continued to limit our build-out of the additional slips,” he said. “We have a waiting list for additional slips right now. But they won’t let us build anymore because they said we’re ‘too close to the end’ of our concession contract with the National Park Service. And we’re like, ‘You can’t do that!’”

APM officials hired a Washington, D.C., law firm to talk with the park service. The law firm found that there’s no precedent.

The Glen Canyon NRA did not respond to a request for comment before press time on Wednesday morning.

“That’s the reason that there’s such a push, because of that impediment that they (park service) put upon this project for the last four years,” Schoppmann said.

The highway patrol directed motorists off the roadway on a Friday afternoon at Jádí Tó, where watercraft can’t be launched now. All boaters must go to Wahweap, and then once they launch, they’ll have to go back to APM.

There are several issues with that, said Runnels.

“That being said, they should have looked at letting us put our ramp in so that we have a ramp here or put it at the Antelope Point public ramp,” Runnels said. “Now, as people come through the gate, the money from there goes to the Navajo Nation.

“That money goes for the benefit of the Navajo Nation, and it’s called the ‘Fee Collection Program,’” he said. “At Wahweap, their money goes to the National Park Service, and they have NPS people who man that.”

Because the water level at APM is around 300 feet, park service officials decided not to install a ramp there. Instead, they installed a $7-million-plus ramp near Wahweap. Another ramp was installed in Bull Frog, Utah, which was more money.

“When we submitted a low water plan at the end of 2020, our plan was to put more slips on three of the different docks down there,” Runnels explained. “What we wanted to do was once we got the boats on the water; we didn’t want to pull them off.

“If you don’t pull them off the water, it doesn’t matter what the water level gets to; you don’t have a ramp to do it,” he said. “We wanted to put them all in the water and then add the additional slips; fix our path, which we finally got approval but not until the end of April (2022).”

Runnels said the park service never replied to their water plan, so APM officials considered it a denial.

“Verbally, they told us we weren’t allowed to do it,” he said. “So, what it appears they’re trying to do is push traffic toward Wahweap and away from here. That’s why we’re kind of where we’re at.”

Kelleroy Bennett, who runs the maintenance crew at APM, said his crew is about 90% Diné. About 90% of Natives are working on the river as well.

“My own department crew, they travel two to three hours from their homes just to come here and work,” Bennett said. “We abide by whatever rules they throw at us. And we go and exceed it.

“Now, we’re putting people in danger,” he said, “in the form of safety because of the access.”