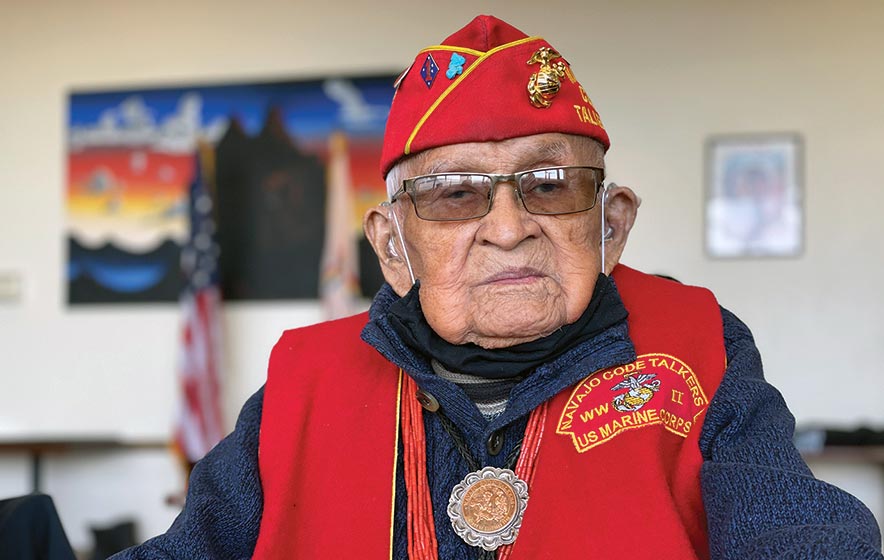 Navajo Times | Donovan Quintero
Navajo Code Talker Samuel Sandoval poses for the camera on Nov. 11, 2020, in Shiprock. Sandoval died on Friday, according to the president’s office.

According to a press release from the president’s office, Sandoval died Friday evening.

Sandoval enlisted into the Marine Corps on March 26, 1943, and completed his basic training in 1942. After his training, Sandoval served in five combat tours, including Guadalcanal, Bougainville, Guam, Peleliu, and Okinawa.

He was honorably discharged on Jan. 26, 1946, and returned home. He enrolled in college and earned a certificate in substance abuse counseling. He worked in Farmington as a counselor.

“That’s so sad to hear. We saw and acknowledged him at our first forum. As a Code Talker that represented our Navajo Nation, I am honored to have met him,” Presidential candidate Rosanna Jumbo-Fitch said. “Prayers to his family.”

“Thank you, Sam, for all your support throughout the years for me to become a leader for Navajo,” Presidential candidate Dineh Benally said on Saturday. “My condolences to the family.”

“It’s very, very saddening to hear that one of our Code Talkers has passed on into the spirit world,” Presidential candidate Buu Nygren said. “One of the things I can always remember and what makes what warms my heart, and it will continue to warm my heart throughout my life, is the strength of our language and how they continue to honor it. My condolences to all of his family.”

Funeral services for Sandoval are pending.