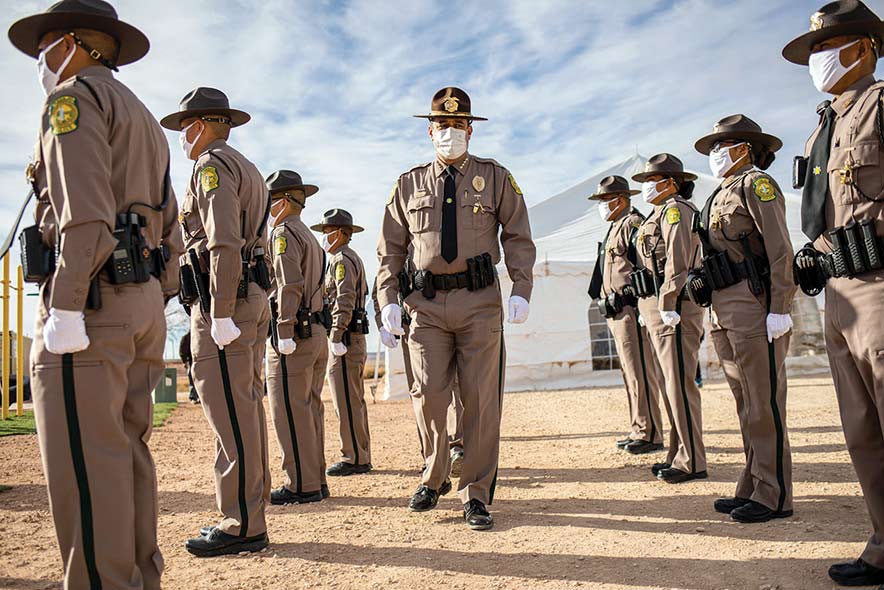 The Navajo Nation Police needs 775 officers to meet community demands across the Navajo Nation, according to an assessment done by Strategy Matter and Navajo public safety leadership.

With less than 200 officers who are currently on the force, getting to this large amount is a lofty goal, especially when it comes to the budget.

For this, the Strategy Matters and public safety leadership consulting team suggested that NPD set an initial target of 500 personnel, with 300 serving as patrol officers, and 200 serving as command and support personnel. These numbers are based on a budget-driven authorized-level approach the Nation has been using and the workload-based approach.

“The demands on this department are extreme,” said Liz O’ Connor, consultant team lead. “The range of issues officers are called upon to address, the vast distances they must cross, and the limitation of radio and cellular coverage as well create a nearly impossible situation every day for so many officers in a department of this size.”

The Navajo Police Department’s assessment is 174 pages long and took 18 months to develop. Last Thursday the assessment was unveiled to the public.

With this assessment three basic questions are answered such as: Where are we now? Where we want to go? And how will we get there?

But the number of officers needed was the big takeaway from the report.

“It’s a unique report for the Navajo Police Department,” said Chief Phillip Francisco. “It’s a lot to digest…some of the recommendations is we are extremely short staffed.

“Seven hundred fifty would be the ideal number of officers to really do the job that our community demands and to keep our officers safe,” he said. “We have a long way to go to get to that point.”

In a letter to the NPD community, Francisco stated about the assessment, “As you know, from the first day of my work with NPD in 2016, I have been working to support improvements and corrective actions to address long-standing problems related to an eight-year period with no stable leadership and chronic financial and staffing challenges.

“I have been supported in this endeavor by a team of highly skilled, extremely dedicated, and hardworking commissioned and noncommissioned NPD personnel,” he said. “The fruits of their labors are evident in the strengths cited in the organizational assessment.”

When it comes to the demands placed on the Navajo Nation Police, Navajo lawmakers are quick to express needed service from officers without investing in them.

The biggest example is absolutely nothing is done to acquire safe buildings for officers and personnel in Window Rock and Shiprock.

Even more obvious is delegates continuing to advocate for outside police forces to come onto Navajo Nation to help police the Navajo people, an option that Francisco doesn’t agree with.

This type of attitude from lawmakers toward the NPD and Francisco is also seen at the community level.

At what was said to be a police forum in Teec Nos Pos, Francisco and his officers were criticized to the point to where the speaker of the event asked if Francisco was “full-blooded Navajo,” and “if not, I think we’ve got to do something about that” insinuating Francisco, who is half Navajo, shouldn’t be chief of police because he is not full Navajo.

Frustrated with what was being said about his officers and their efforts, Francisco got up to defend them and to explain what his department was doing to improve.

But this abrupt address wasn’t appreciated and Francisco was told he offended people and that he had to take the criticism. But if Francisco had not demanded to speak it’s uncertain if he would’ve been given an opportunity.

No other officer was given a chance to speak, except Criminal Investigator Director Michael Henderson, but that was only after Francisco insisted he be given a few minutes.

This was a stark contrast to what Jesse Delmar, Public Safety Division director, O’Connor, and President Jonathan Nez had to say about Francisco and police officers during the unveiling of the assessment.

“He wanted to most of all come back and help his people,” said Delmar of Francisco. “A lot of us say that but obvious he was sincere when he said this. That commitment is alive to this day.”
In a list of weaknesses identified by the consulting team administrative bottlenecks was one of them.

Many functions that are crucial to a highly efficient police department are outside of the control of the NPD. Examples include Human Resources functions, like hiring, procurement functions for a range of goods and services, and budget functions.

In an analysis done by the consulting team, it stated staffing levels described in an organizational chart by NPD in October of 2020, the department had 158 patrol officer positions.

NPD personnel are expected to work 2,080 hours per year, 1,248 hours annually that patrol officers ought to devote to calls for service, and, after a little math, 197,184 person hours per year is available to the NPD to respond to calls.

An arrest can often take anywhere from four to eight hours to complete. Arrests alone therefore, on average, account for anywhere from 105,312 to 210,624 hours annually. On the upper end of this range, a person’s hours would be consumed entirely by arrests.

Another hindrance is the need for rural addressing. Without precise addressing, officers and other responders rely on physical descriptions of locations in order to respond to calls, or, if they are lucky, GPS coordinates a colleague is able to share.

The consulting team witnessed officers responding to calls that often required directions from local residents along the way and rely on major landmarks, the colors of nearby homes, or windmills.

Officers often do this while navigating challenging, unpaved country roads.

NPD simply has too few people trying to do too many things alone. It’s an unhealthy and unsustainable condition for the officers and for the thousands of Diné who need the effective and timely assistance of the police.

Working towards 500 will allow the NPD to vastly improve public safety outcomes, stated the assessment.

The assessment is available for the public to view.

In order to get the information needed for this assessment the team designed a process for the NPD that included interviews, focus groups, surveys, sector research, and more.

The team engaged a diverse group of stakeholders across Navajo, by being physically present in the places they live and work. With the interaction it was necessary to not only adapt engagement methods to accommodate Diné speakers, but to accommodate cultural differences affecting participation in an information gathering process, stated the assessment.

“This report is a reflection of all of these voices from patrol officers to elders, and chapter house leaders, from youth and students, to police dispatchers and partners,” said O’connor. “From social and human services to state, county, and federal law enforcement agencies.”

Major weaknesses found within the department are: staffing levels are dangerously low and communications systems (radio, cell coverage) are not reliable in all parts of the Nation. This jeopardizes officer safety and compromises efficient response.

Other weaknesses include: the sense of department unity is not consistently present; information flow is a real challenge for technical and organizational reasons; facilities, the Window Rock station is in a serious state of disrepair, and the Shiprock station is closed; general orders and rules and regulations are outdated (1979) and unhelpful; COVID-19 impacts: it is harder than ever to connect with residents; there is significantly increased demand on dwindling resources at NPD and for partners; recruitment challenges: money, interest, training, disqualifications, available housing, and perceptions among youth.

But the strengths identified include: commitment and dedication of officers at all ranks; younger generation of NPD staff see the department as a unified whole; greatly improved—and growing—confidence in department leadership, among officers, civilian staff, partners and others; thorough (top to mid-managers) commitment to officer wellness and improving early intervention programs; partners and potential partners recognize the challenging circumstances of law enforcement on the Nation and want to support efforts to improve operations, safety, and coordination.
“We learned the NPD leadership is visionary, highly accountable, and trusted by officers, residents, and staff alike,” said O’Connor. “Invest in this department.

“NPD is understaffed and underequipped,” she said. “Their dedicated officers as well as residents are put in danger by this every day.

“We hope the rest of the Nation including residents, political leaders, civic leaders will take this report as an invitation to work collaboratively and constructively,” she said.