President Jonathan Nez has vetoed a resolution to permit Navajo casinos to re-open at 50% capacity.

It was a long shot that Nez and Vice President Myron Lizer would approve this resolution, especially with the spike in COVID-19 cases over the past month as the Navajo Nation suffers its second wave. 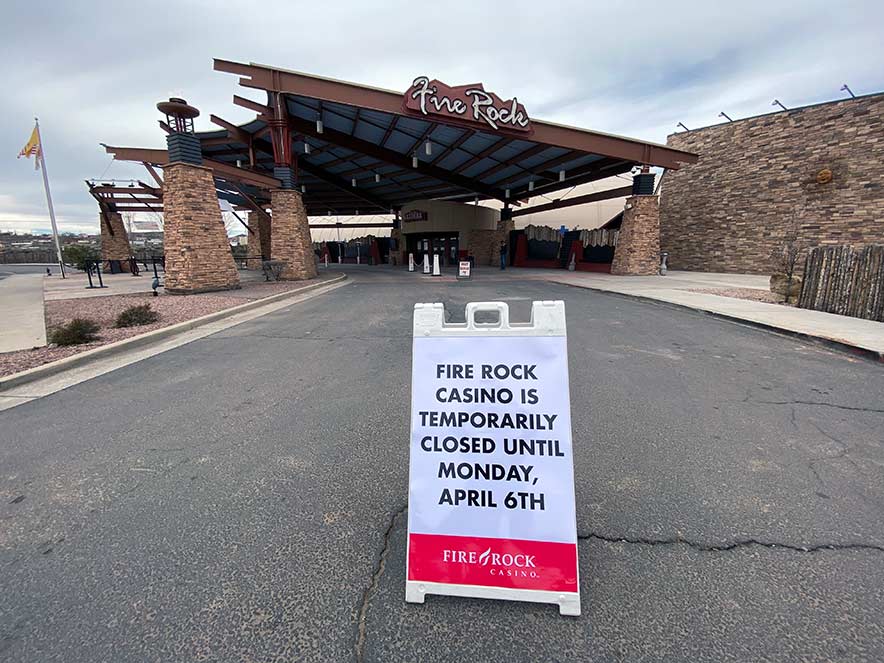 Navajo Times | Donovan Quintero
Fire Rock Casino patrons are met with this sign after the Navajo Nation’s four casinos were shut down on March 17 due to concerns over the coronavirus.

“We cannot put a price tag on the health, safety, and lives of our Navajo people,” stated Nez. “Revenues do not outweigh the precious lives of our elders, children, and gaming employees.”

Brian Parrish, Navajo Nation Gaming Enterprise CEO, said they monitor new cases each day and had they opened over a month ago, while numbers were at the lowest they had been since the Navajo Nation first reported COVID-19 cases in March, then it would’ve been more favorable for the enterprise.

“Our board and management team does not want to put the Navajo people or employees, or patrons at risk,” said Parrish in an interview with Navajo Times. “We understand why this is a challenging decision for everyone, including Navajo leadership. We are not sure what the next steps are.”

His goal, he said, is to “collectively preserve the enterprise and employment for everybody.”

Earlier this month Parrish reported to Navajo Nation Council on why it was essential for the casino to re-open by Nov. 17. There are 1,180 employees at the casinos, and over 100 employees who work for the Navajo Gaming Regulatory office, of whom 85% to 88% are Navajo.

During Council, Parrish said this past Tuesday would be the date that casinos would have to open if they want to survive and not decommission, although in a recent press release that date was changed to the end of the month.

Parrish said if they don’t have a solution worked out, by way of re-opening or additional relief funding, then they will be forced to decommission.

“We got our cash forecast report put together,” said Parrish. “We still have our team members on administrative leave with pay. We are paying all of our fixed expenses, utilities, debt service; we remain focused on honoring those responsibilities. We firmly we believe we have a couple of weeks.”

During the special session the chairman of the Navajo Gaming Sub-Committee said that the gaming board and Nez had “kicked the can” to one another when it came to re-opening, until they eventually gave it to Council to decide.

“There’s nothing in Navajo law that specifically says the gaming board can open the casinos and not comply with Navajo Nation public health (orders),” explained Chief Legislative Counsel Dana Bobroff. “That is essentially the crux right here.

“I do believe the enterprise gaming board does have the ability to open the casinos,” she said, “but without this legislation I lean to the fact … (while the) gaming board maybe able to open casinos, they do have (to do) such in compliance with the Navajo Nation public health orders, emergency orders. That is problematic.”

But in order to make their decision, the delegates, including Gaming Subcommittee Chair Eugenia Charles-Newton, reported they visited two casinos in Phoenix to take a gander at how they are operating safely. By what they witnessed, the delegates believed re-opening safely was possible.

Parrish explained to the Council that gaming had an 11-page checklist with 233 safety items developed in their re-opening safety plan. The checklist includes machines being turned off with the chairs removed to allow for separation between gamblers.

Hand sanitizer will be located throughout the casino floor, and slots will be sanitized every two hours. Mask wearing will be mandated, and masks will be provided if needed.

Over the summer, Navajo Gaming was able to get $24.6 million from the CARES Act funding, and this brought “team workers” back to administrative leave with pay.

Parrish said that over the past six years, of the $301 million profits made by the casinos, $210 million has gone back to the Navajo Nation.

“Seventy cents of every dollar profit is returned to the Navajo Nation,” said Parrish. “We provide that funding in a number of different ways: We pay our loan principal, our interest income dividends back to the Navajo Nation, sales tax, public safety, Navajo-Hopi Land Commission, NTUA on utility infrastructure debt, land acquisition, land transfer — a ton of different ways we do that.”

Whether Council will consider the popular route of overriding Nez’s veto isn’t known as of yet. When Council passed the legislation it was with a vote of 15-8; if they try to override the veto they’d need a 2/3 vote of the 24 Council members, or at least 16.

Parrish noted that should gaming decommission, employees will more than likely leave to find jobs outside of the Navajo Nation, and no one will keep them as safe as Navajo is.

“I offer words of encouragement,” said Parrish. “I offered transparency when communicating with them, because we want them to know there is hope, but we aren’t going to create false hope. Everyone is stressed about this because they have family members they are taking care of.”