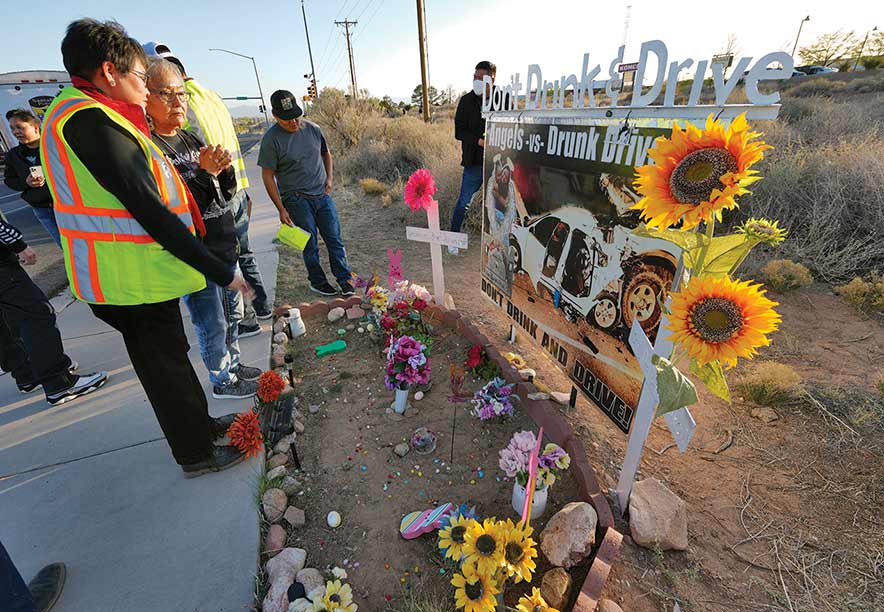 On Wednesday morning, Darlene Peshlakai, her husband David, their children, and grandchildren were accompanied by Council delegates Eugenia Charles-Newton and Amber Crotty on the walk.

Darlene, David, and their daughters had left the Santa Fe Indian School after a basketball game against the Lady Braves.

They were going to Lovington, New Mexico, to watch the boys play the next day when the repeat drunk driver hit them. Ultimately, the driver, James Ruiz, was sentenced to 40 years in prison.

Darlene has to live with the loss and terrible pain that keeps her awake at night.

“People approach me, and they say, ‘As a mom, you’re very strong, you’re strong,’ and I say, ‘Yeah, thank you,’ out of courtesy,” Darlene said on Sunday in Santa Fe. “I always take it as it is. You know, I’m not strong.”

Darlene explained that while people praise her for her strength and how she advocates for her girls, she yearns to hold them every day.

“I’m still at that same place with missing my girls, wanting them here; to touch them and hold them and being able to hug them,” she said. 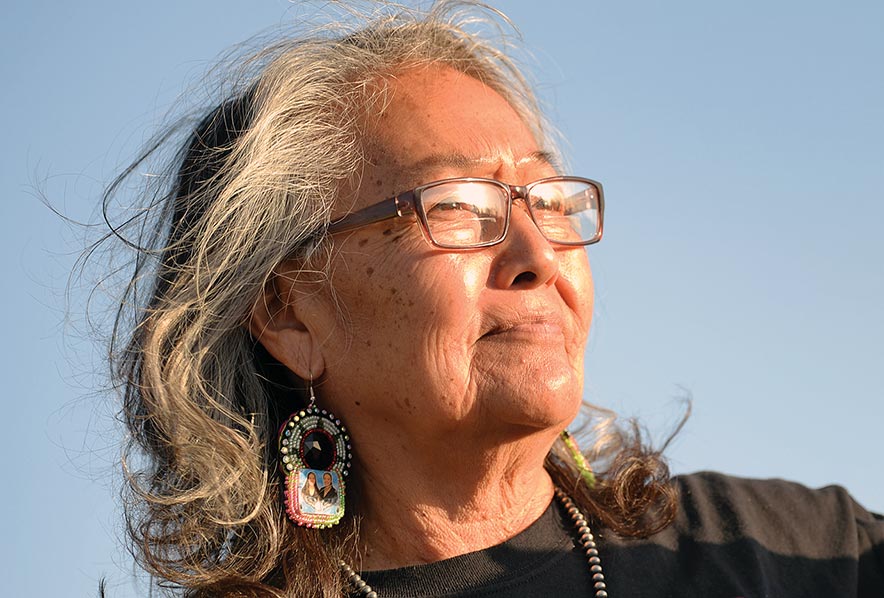 She said “healing” wasn’t in her vocabulary because the pain was still as fresh as 12 years ago.

“It’s just a word to me. People use that a lot: ‘you’re healing, that’s healing,’ and things like that,” she said. “But I’m never going to heal and heal is not in my vocabulary.

“But that’s me,” she said. “That’s my opinion. That’s my words because I’m the mother of those two girls. I bore them. I carry them within me.”

The parents were in Santa Fe on Sunday to honor their girls at the annual Angels vs. Drunk Drivers checkpoint with the help of Santa Fe and other police officers.

The annual commemoration captured one alleged drunk driver. A few other drivers were tested and released.

A photo at the memorial site showed the actual scene of the accident. In the image, the front end of Ruiz’s truck is shown crushed halfway into the car the Peshlakai’s were driving. A bloody pair of basketball shoes are seen outside the car’s rear door.

Darlene said she had not seen any of their personal belongings since 2010 because it was used as evidence against Ruiz.

She hopes the violent image of the fatal accident would make a person not drink and drive.

On Wednesday, the walk to remember Deshauna and Del Lynn was held beginning at the Bashas parking lot.

Charles-Newton, who also attended the sobriety checkpoint in Santa Fe on Sunday, said she understood the love a mother feels for her children as a mother.

“As a mother, we were there when our children were brought into this world. We felt their first kicks. And fell in love with them,” she said on Sunday.

Charles-Newton said many people were arrested for DUI/DWI across the reservation. According to 2021 and 2022 DUI statistics on the Navajo Nation, 1,363 arrests have been made, with the highest number of arrests coming from Shiprock with 346 arrests.

Charles-Newton told participants in the walk that she and fellow Council Delegate Amber Crotty were working on amending the Navajo Nation Code to strengthen the laws to hold drunk drivers accountable for their crimes.

“We should be prosecuting these individuals who chose to drink and drive,” said the Shiprock representative, a former tribal prosecutor.

Deputy Chief Ronald Silversmith with the Navajo Nation Police said the department had selected officers to combat drunk driving and the drug problem affecting the reservation.

Another victim of a drunk driver, Samson Bryant, who lost his wife Janella Bryant, 47, who was also from Naschitti, said his wife was killed by an alleged drunk driver on Sept. 19, 2020.

The incident occurred in front of the Sagebrush liquor store on State Highway 264, west of Yah-Ta-Hey, New Mexico, while she was participating in a bike run.

Charles-Newton said Bryant said the suspect was “hiding out” on the reservation and was avoiding prosecution.

Bryant said a friend saw the suspect in Navajo, New Mexico, information he shared with the McKinley County Sheriff’s Office. But because the community of Navajo is on the reservation, they could not arrest him.

“(The suspect is) hiding out here on the Navajo Nation and has not been brought to justice,” Charles-Newton said on Sunday. “He (Bryant) lost his wife. How many more lives need to be taken?

“We need to make laws on the Navajo Nation so that we no longer harbor criminals,” she said.

Darlene said despite the pain that’s never lessened for the last 12 years, it was her other children and grandchildren that gave her strength and the reason to keep advocating on Deshauna’s and Del Lynn’s behalf.

She added that while good progress is being made to fight drunk driving on the Navajo Nation, she needs to see how it’ll ultimately play out.

“We need to see what is actually is going to happen,” Darlene said on Sunday, referring to if the Navajo Nation Council would amend title 17.