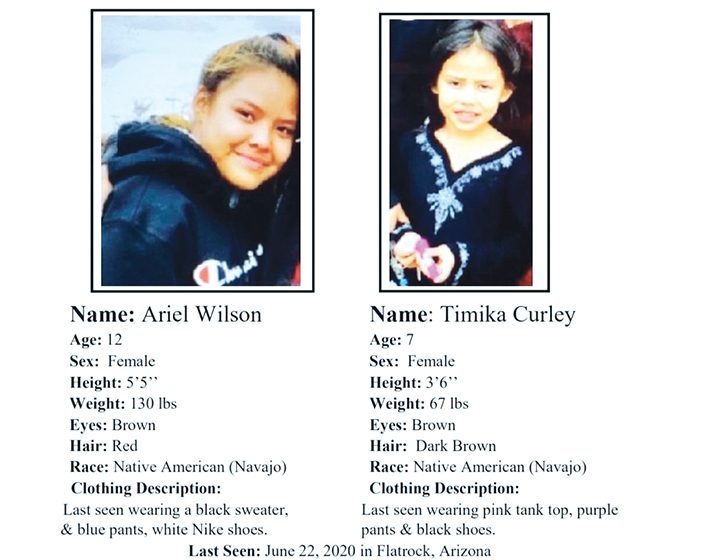 Courtesy Navajo Police Department
Navajo Police are asking for the public’s assistance in locating Ariel Wilson, 12, and Timika Curley, 7, who’ve been missing since Monday morning from their home in Flatrock, Arizona. Anyone with information, to call their local law enforcement agency.

Two children from the Chinle District have been missing since Monday morning.

A missing and endangered advisory was issued on Tuesday for Ariel Wilson, 12, and Timika Curley, 7, who were last seen at the their residence in Flatrock, Arizona, which is located in the Nazlini area, south of Chinle.

Wilson was last seen wearing a black sweater, blue pants, and white Nike shoes. She is 5’5”, 130 pounds with brown eyes and red hair.

Curley was last seen wearing a pink tank top, purple pants, and black shoes. She is 3’6”, 67 pounds with brown eyes and brown hair.

Police did not say if the girls are related.

According to Google maps, Nazlini is 11.4 miles south of Flatrock and Chinle is 11.1 miles to the north. The community is surrounded by desert while to the east it becomes rugged, filled with canyons and mountains.

Information about the children has been entered into the National Crime Information Center, or NCIC.