2 sets of hikers rescued in 2 days

A couple hiking Cathedral Rock in Sedona on Saturday called for help after losing sight of the path after dark. In less than two hours, Verde Search and Rescue were able to help them return to their vehicle safely.

The next day, two men were hiking West Clear Creek when one man felt weak and dehydrated. The 65-year-old was left by his friend, who continued the hike up the north rim to get phone service and help.

Verde Search and Rescue rescued the 65-year-old and returned him to his vehicle with his anxiously-waiting friend.

It’s important to remember that it gets much darker and cooler after the sun goes down, especially in high desert areas. Always bring a flashlight, extra food, water, and proper clothing when hiking. 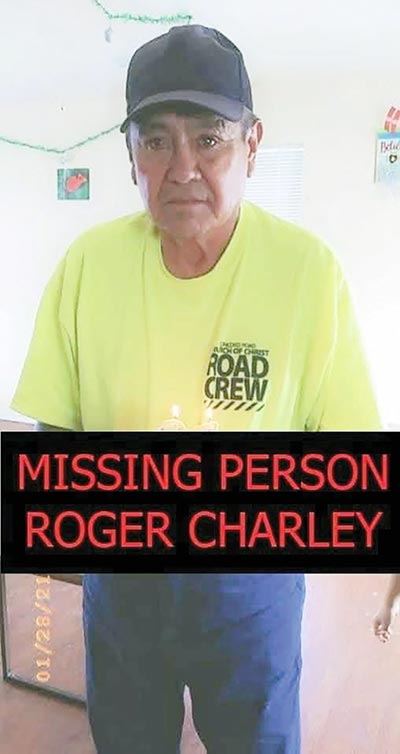 Submitted
Missing person Roger Charley. Anyone with any information about Roger Charley is urged to call the Navajo Police’s Kayenta District at 928-697-5600.

KAYENTA – Roger Charley, 61, is missing and was last seen on Aug. 16 in Chlchinbeto, Arizona.

He is a medium build, stands 5-2, weighs 150 pounds, and has brown eyes and black/gray hair. He was wearing a beige-colored shirt with blue jeans.

He is originally from Old Valley Store between Chinle and Many Farms, Arizona. He is known to hitchhike to the Chinel Basha’s area.

Anyone with any information about Roger Charley is urged to call the Navajo Police’s Kayenta District at 928-697-5600.