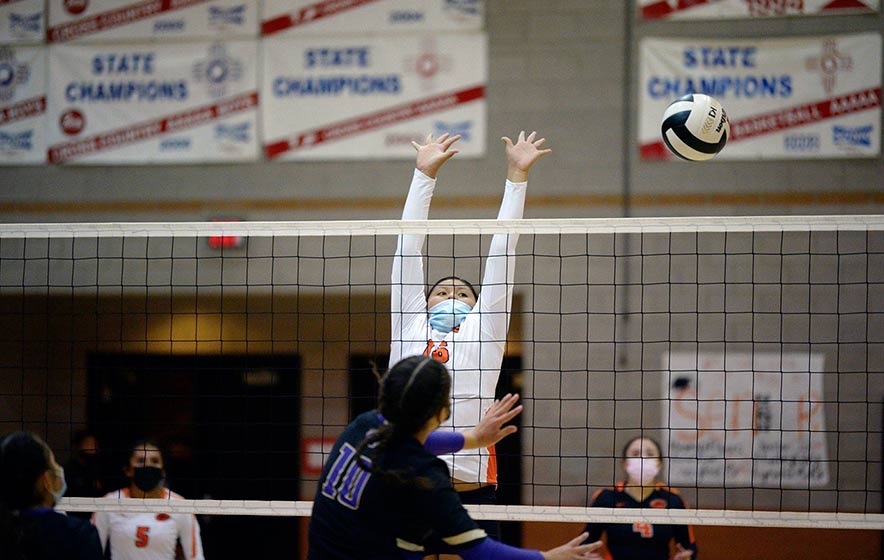 File photo
Gallup Lady Bengal Rylie Whitehair (16) goes up for a block on Kirtland Central Lady Bronco Caylynn Lee (10) in this file photo on Oct. 21. Gallup earned the No. 4 seed in the Class 4A bracket.

Of the three, Ramah garnered the No. 2 seed in the Class 1A bracket as the Lady Mustangs enter the playoffs with a 22-1 record.

The Mustangs are seeded behind top-ranked Melrose, a team that dropped its first game of the year last week to Logan High.

“I’m happy with where we’re at,” Ramah coach Deana Larson said. “I think the girls have worked super hard to get there.

Gallup coach LaRena Morris was also ecstatic with where the seeding committee placed her squad as the Bengals (18-5) got the No. 4 seed in the 4A bracket.

“I’m extremely excited about that,” Morris said. “That is what we were hoping for and when we saw our school name on the screen everyone was super excited.”

Laguna-Acoma, meanwhile, was given the third seed in the 2A bracket. The Lady Hawks finished the regular season with a 19-4 record.

On Friday, Laguna-Acoma plays No. 6 seed Escalante at 4 p.m. at Cleveland High School in Rio Rancho.

At noon, Ramah will take on No. 10 Magdalena at Rio Rancho High School.

“We’ve played Magdalena already,” Larson said. “They’re not as good as they have been in the past but they’re still a good team.”

Ramah will be gunning for its third state title with the last one coming under Larson’s watch in 2014.

Under then-coach Alejandro Rivera, Ramah lost the 2017 finals to Logan in a five-set marathon.

With her current squad, Larson says she likes their chances.

“I think we’re playing probably the best that we have played,” she said. “They still have room for improvement always. We still struggle a little bit with our serve-receive. That’s been our struggle all season, but we’ve been working on it hard in practice.”

In the 4A bracket, Morris is also optimistic that her team can make some noise at this year’s playoffs. The Bengals are coming off a 10-0 campaign in District 1-4A play and the Gallup coach is hoping that will carry over.

“I feel like winning our district gives us the momentum and motivation that we need going into the state tournament, especially going up against some of these tough teams,” she said. “We’ve already seen a lot of teams already and we know they’re going to be tough. We’re just gonna use everything that we have and use that to our advantage.”

By seeing some of the playoff teams at the Rio Rancho and Santa Fe tournaments earlier this year, Morris said those squads are going to try and key on her two senior middle hitters: Hailey Long and Jordan Joe.

“They’re going to expect us to have them hit throughout our matches,” she said. “But we do have hitters all the way around. They’re capable of hitting the ball and we’re going to mix things up to keep them off balance.”

The Bengals are scheduled to play No. 5 seed Pojoaque Valley at 10 a.m. on Friday at the Rio Rancho Events Center, formerly known as the Santa Ana Star Center.