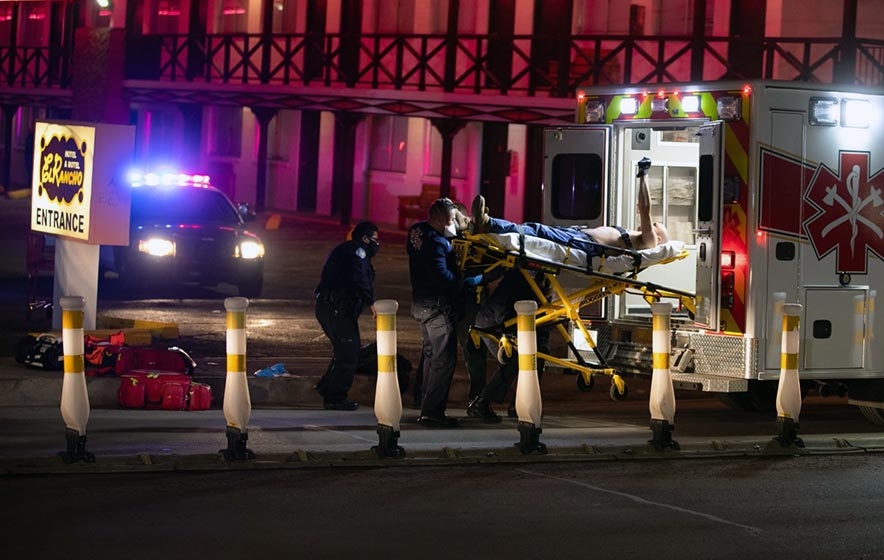 Navajo Times | Sharon Chischilly
The victim of a shooting in Gallup Wednesday night raises his arm as he is loaded into an ambulance. Police are seeking information in the incident.

A man is in critical condition in an Albuquerque hospital following a shooting in Gallup Wednesday evening. Two potential suspects are still at large.

According to Gallup Police Dept. spokesperson Capt. Erin Toadlena-Pablo, an officer was in the area of the El Rancho Hotel at about 6:30 p.m. when she heard what sounded like gunshots. When she went to investigate, she saw a man coming around the corner. He appeared to be reloading a handgun.

The officer reportedly ordered the man to put the gun down and began to handcuff him when he told her he had been shot. She observed a gunshot wound in his torso and began to render first aid until an ambulance arrived.

Police believe the victim, whose identity has not been released, had fired shots as well.

A white, newer-model extended-cab Toyota Tundra was observed leaving the scene as the officer was rendering aid to the victim, according to Toadlena-Pablo. Police believe the two occupants of the vehicle may have been involved in the shooting.