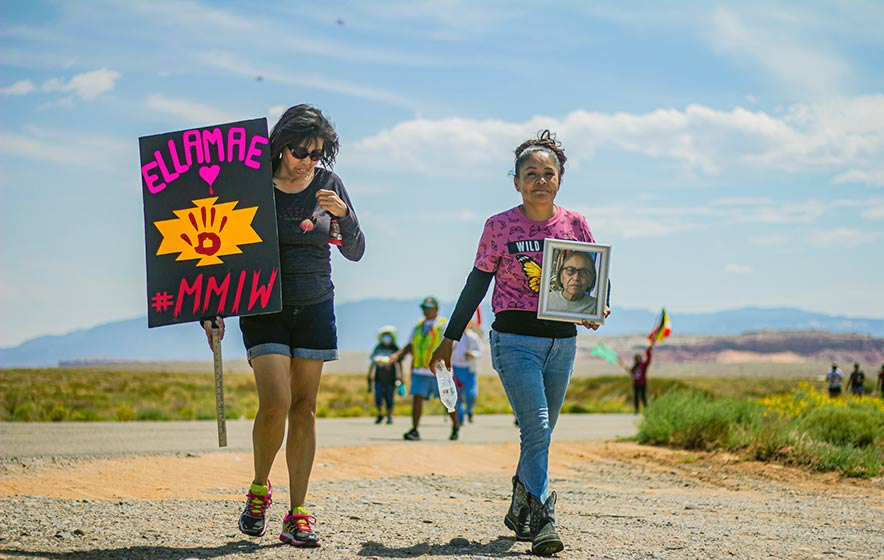 Becky Johnson finished the Diné 4 Corners Prayer Run wearing an embroidered hand-stitched Missing and Murdered Indigenous Women and Girls design on a white handkerchief under a yellow sunflower made by Ashlynne Mike’s mother.

“I was praying that she at least hears me, that she at least knows I am here, praying for everybody that is out here running,” Johnson said about her younger cousin Tiffany Reid, who has been missing since 2004.

Reid was last seen leaving for school in Red Valley, Arizona. She never returned, and some of her property was found just below the mountain of Sweetwater, Arizona.

But her case was purged from the system, a heart-breaking blow for Johnson and her family.

Despite the major setback, Johnson continues to keep Reid’s name alive by working with the New Mexico Missing and Murdered Indigenous Women and Relatives task force, and every time she runs, she runs with the white handkerchief with the inscription made by Pamela Foster, the mother of Ashlynne Mike, a young girl who was kidnapped and murdered in 2016.

The Diné 4 Corners Prayer Run started with four runners in Blanding, Utah, at the Dine Blue Mountain Chapter. They continued toward Monticello, Utah, and ended at Red Mesa Chapter House, where Martina Maryboy, lost count of runners who joined.

“We let them run, let them grieve through running. One brother just wanted to run, run, run,” said Maryboy, who organized the three-day run to bring awareness to the families of Kayla Blackbird, Ella Mae Begay, Tiffany Reid, and others who joined the run.

“I wish I had an answer, but this is the only way I can help is through a prayer run,” Maryboy said.

Maryboy said the event came together when the families of Kayla Blackbird and Ella Mae Begay joined to help. Some chapters set up a space throughout the run, and donations from people help the event run smoothly.

Maryboy’s determination to start the run was propelled when she saw Seraphine Warren crying and pleading for any information on her missing aunt Ella Mae Begay, who went missing in June from Sweetwater.

“We really need it, I don’t think I’ll stop, until all this missing stops,” Maryboy said.