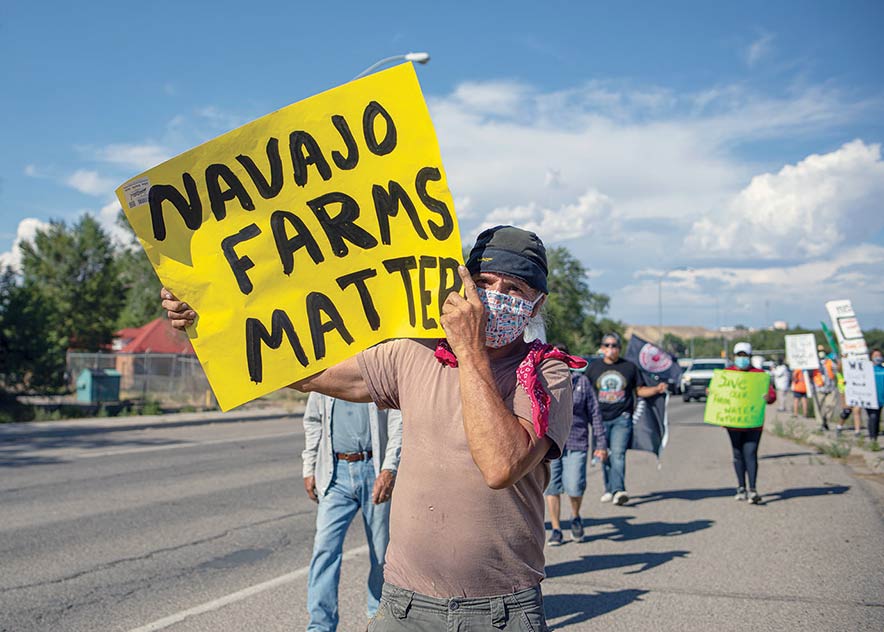 As a mother of four, Michelle Huskay is worried about the welfare of her children when it comes to the non-Navajo employees at San Juan River Farm Board President Dineh Benally’s hemp greenhouse.

On the hot afternoon last Friday, Huskay along with more than a dozen others from the Shiprock area came out to protest not the hemp but the way Benally has decided to grow it. “I’m showing my support against the hemp cultivation,” said Huskay. “My reason is due to the disrespect from the hemp workers. I have four children and the road is like 30 feet from our home and the workers fly by every day, no regard to my children.”

It’s not only the speeding down her road that concerns Huskay, but also the trash the workers leave behind such as masks and gloves. But when it comes to the local Navajos who are in support with how Benally is conducting his business, she said they, too, are problematic and began verbally harassing people.

“It’s not being monitored,” said Huskay. “There’s constantly people going by. When everyone is sitting at home during the lockdown, shelter in place, yet you have people going by at all hours of the night … during the 57-hour lockdown. There’s no respect. They’re laughing at us.”

During a July 28 San Juan County Farm Board meeting, Benally said the “guests” who work for him are being discriminated against and that needs to stop. Numerous reports of these “guests” bringing alcohol onto the reservation, claims that they are part of a drug cartel, the establishment of man camps, and even the possibility of human trafficking are becoming louder and louder. “We need to use outside sources,” said Benally at the meeting, “to support and help our farmers. We need to stop this discrimination. I’m hearing people are discriminating of our guests. This is 2020. Discrimination needs to stop.”

Kyle Jim, one of the organizers of the protest, said they’re not protesting hemp but rather the disrespectful nature of the workers that Benally has decided to bring into the community without anyone’s knowledge. “They’ve been involved with illegal dumping, whether its domestic waste or human waste,” said Jim. “This is in no way a racial issue. They are not accounted for and they use all our resources within the community starting with the land, water and people. Only one who benefits from this is Dineh Benally himself and his so-called guests.”

Walking from Salt Creek Wash to the Shiprock Flea Market with the other protestors, Jim said the negative impacts of the hemp greenhouse are handled by the community with absolutely zero help from any tribal leadership. “We have no official government representative standing and walking with us,” said Jim. ”I just want to make that apparent. We are marching to let the visitors know that we know they are here, and they have not gained any consent on what they are doing.”

Jim said more “visitors” could be coming because from his understanding Benally is looking to become the largest hemp grower in the U.S. “He’s basically pimping out his own people, our own land and the water,” said Jim. “That’s not right. He’s not giving everyone a share of what’s to gain. He’s operating off of greed. We don’t support that.”

During the July 28 farm board meeting, residents brought up another major concern with the non-Navajo workers. Mobile homes have been reported on farmlands without home-site leases, proper sewage, and at times without going through the proper probate process for the land.

These mobile homes are where the workers live, and disputes between these non-Navajo individuals and Navajo farm owners have ensued.

“We view this as an encroachment of our own farmland per the 2014 amendment of Title 3 of the Navajo Nation Code,” said Lynda Hayes, a resident, to the farm board at that meeting. “It is expressed that one of the responsibilities of the farm board is to protect farm lands from encroachment of home site, burial site, church site, business site, advertisement site, real estate development, and urban development.

“Why the mobile homes,” she asked, “with no home-site leases and no proper sewage and wastewater containment are allowed to remain where they are?”

At the end of the protest Hayes spoke up on her megaphone and asked, “Where is the leadership?” She also told the crowd of a petition to get Benally out of his farm board president position. “What Mr. Benally is doing is unethical,” said Hayes. “He has no right to sell our land that is held in trust. He is putting himself above the Navajo people. He is using his position to benefit himself personally. He is using the pandemic for his own personal gain and it needs to stop.”