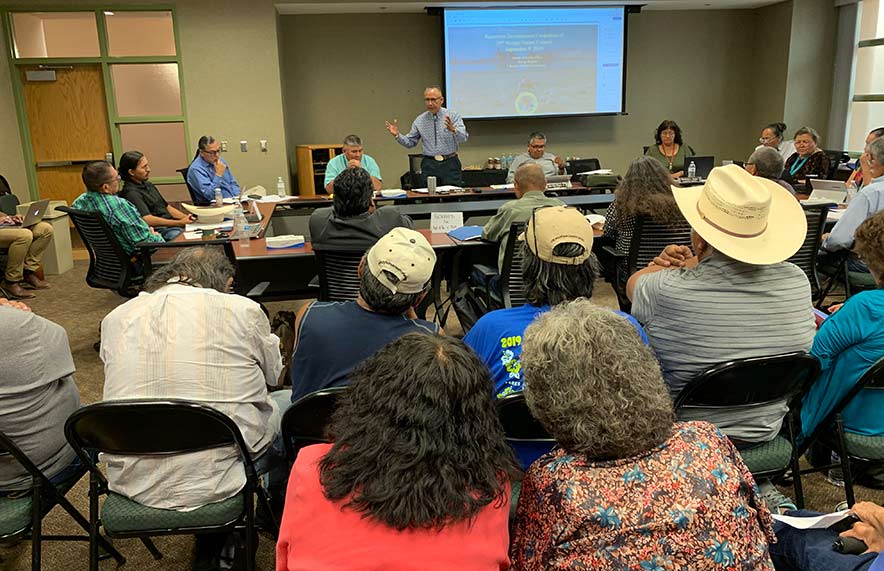 Navajo Times | Cindy Yurth
About 50 ranchers listen to Resources and Development Committee Chairman Rickie Nez during a meeting about drought insurance Monday at the Navajo Engineering and Construction Authority office in Shiprock. The committee agreed to facilitate a meeting with the executive branch to help the ranchers work out a conflict with the Navajo Nation Department of Agriculture that was preventing them from getting individual compensation for forage and livestock loss due to drought.

With just days to spare until the deadline to roll over their drought compensation applications, Northern Agency ranchers appear to have won their battle with the tribe over federal drought relief funds.

In a meeting Monday in Shiprock with the Navajo Nation Council’s Resources and Development Committee, which also included representatives of the Navajo Department of Agriculture, the Bureau of Indian Affairs and the Navajo Land Department, the ranchers reiterated their request that the Nation withdraw its application for drought insurance under the U.S. Department of Agriculture’s Risk Management Agency so the ranchers could individually claim the acreage under the Farm Service Agency’s Livestock Forage Disaster Program.

Ferdinand Notah, representing the agriculture department, continued to maintain that lumping the tribal trust land in New Mexico under one umbrella would result in a program that could help all ranchers and farmers — even ones who hadn’t applied for the FSA benefits — while the ranchers said they hadn’t seen any help from the department yet and preferred to apply on their own.

Under instruction from Natural Resources Division Director Rudy Shebala, the ag department had attempted to address the ranchers’ concerns in an Aug. 20 letter to the FSA asking that the agency compensate the ranchers directly as “sub-units” of the tribe, while also leaving the tribe free to apply for drought insurance. But Ernest Diswood, representing the ranchers, said that’s not what they wanted.

“When we had talked to Dr. Shebala earlier, that’s not what we agreed to,” he said. “We agreed that Dr. Shebala would write a letter asking to return benefits to the grazing permit holders, waive the (late) fee or the Navajo Nation would pay the fee, and we would receive rollover certification for September.”

Sept. 15 — this coming Sunday — is the deadline for the current year applications to “roll over” for next year. Meanwhile, the FSA has deferred compensation until the tribe and the individual ranchers can work out their dispute. The Aug. 20 letter, Diswood said, is problematic because it doesn’t resolve the issue of the tribe and the permittees “double dipping” for the same acreage — which is the reason many of the permittees were denied benefits this year.

He also argued, as he had in the past, that the Navajo Nation has no losses from the drought and nothing to insure because it doesn’t run cattle on the land as the producers do. Notah countered that under the drought insurance program, which is separate from the FSA program, acres of land are insured rather than cattle, and the grazing permittees don’t have any acreage.

According to Diswood, the FSA calculates “virtual acres” based on the number of cattle allowed under each grazing permit in order to award compensation.

Representatives from the Farm Services Agency had been invited to the Monday meeting to clear up some of the confusion, but did not show up. RDC Chairman Rickie Nez said they had told him the agency had a mandatory meeting in Albuquerque the same day.

Former Agriculture Department manager John Blueyes argued the ranchers’ rights under Fundamental Law had been violated because they were not consulted when the tribe applied for drought insurance on their behalf. “Deadlines have come. Deadlines have gone. That bothers these people,” Blueyes said. “What more do we have to lose? We need to make amends.”

While Blueyes said the matter could be resolved administratively, RDC’s legislative counsel Shammie Begay said that’s not true, because the decision to purchase the drought insurance was enacted by legislation, which would have to be repealed.

Nez noted the ranchers could simply lobby President Jonathan Nez not to sign the drought insurance application when it comes due in November, but Diswood later said the ranchers have no problem with the tribe applying for the insurance as long as they leave the grazing permittees’ areas out of it.

Harold Dodge, grazing official for Nenahnezad Chapter, argued the tribe doesn’t even have a map of the area it’s claiming, or at least they aren’t showing it to the ranchers.

“I kept asking for maps — to this day I haven’t got one,” he said. “One-hundred, fifty-five thousand acres … we don’t even know where it’s at exactly.”

Notah said the acreage is claimed under “weather grids” used by the National Oceanic and Atmospheric Administration. The precipitation is recorded for the various weather grids and the awards are made according to how much rainfall each area got.

Notah said the ag department has been in “constant contact” with the USDA, FSA, RMA and Natural Resource Conservation Service and has been waiting for a “comprehensive work session” to “get into the details” of the various programs.

Committee member Kee Allen Begay agreed, noting the Sept. 15 rollover deadline. “Let’s set another meeting as soon as possible,” he said, adding that the committee could go to the FSA’s office in Albuquerque if it had to.

The committee voted unanimously to meet with the president Tuesday and apprise him of the situation. According to Diswood, the president did not show up at that meeting, but Shebala did.

“The meeting was very positive,” he said, noting that Shebala agreed to allow the ranchers to draft a letter to the FSA making their requests, and that Shebala would sign it. They would then meet with the FSA on Friday, hopefully resolving the matter before the Sunday deadline.

Diswood said the controversy has been beneficial in getting the ranchers together to present a united front, which they can continue to build on with other issues. “I think this may be the eve of a change in the way the tribe approaches issues related to land,” he said. Shebala did not return a phone call to confirm Diswood’s account of the meeting.