Sweetwater opens up after a monsoon hits Northern Navajo 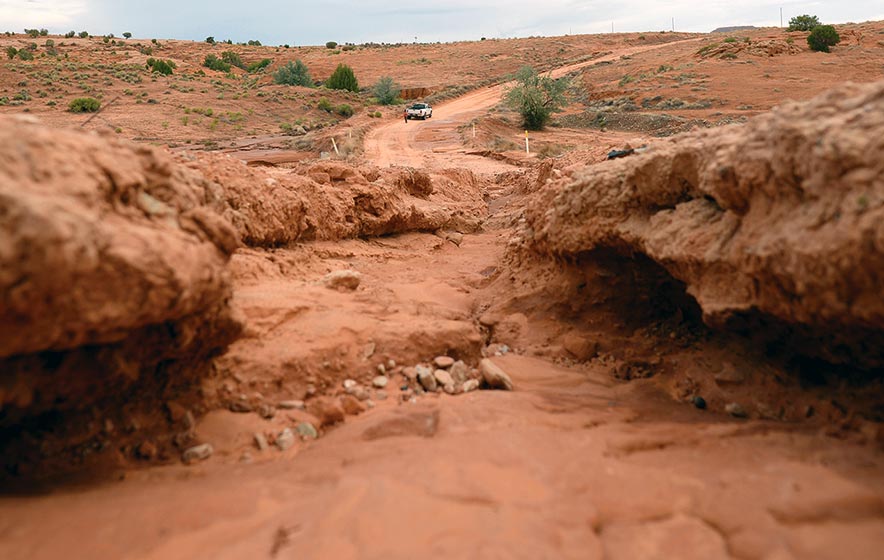 Navajo Times | Donovan Quintero
Evidence of a flood is shown in the road that was gouged by water on Tuesday in Sweetwater, Ariz.

The community welcomed the rains with open arms.

Even as it temporarily destroyed the already bumpy and rocky roads, members of the Sweetwater, or Tółikán, community said they cried and rejoiced for the monsoon rains.

One resident, Alta Yazzie, an elderly woman who lives in a remote area of Tółikán, said the rains are a welcome sight, though her area didn’t receive much rain.

Her niece, Rosetta McDaniel, who brought an ice chest so her aunt could cool herself down, said the bad roads are something she grew up with.

“I grew up here so it’s kind of normal for us,” McDaniel said, who currently lives in Farmington, on Tuesday.

On Sunday, the monsoons took out one of the main roads, making it impassable for many residents, including McDaniel.

She said the last time she remembered the dirt road, Navajo Route 35, a federal government-controlled road, getting washed out by monsoonal floods was when she was a girl.

“When I was younger, when I was a little girl, we went through something like that before. This is the first time I went through it again,” she said.

McDaniel’s mother and her aunt, Alta, live at the southern jurisdiction of Sweetwater Chapter, and its takes about two hours to drive from the chapter to her house on a good day.

On Sunday, when N-35 was washed out, everyone living on the south side of the flooded area were forced to stay home, preventing many from going to work or to the grocery store for food and other essential items.

For Yazzie and her sister, who’ve remained at their homes because of the coronavirus pandemic, the washed out roads gave them a temporary scare because they weren’t sure how’d McDaniel would get food to them.

Yazzie, who said she doesn’t have electricity or running water, has a request: improve the roads.

“Especially for me,” she said. “When I hear of things like the roads becoming flooded, I feel like I’m just going to give up. I think that way sometimes. And my fire wood starts to get low, it is hard.”

Yazzie said living remotely is becoming harder because of her age. But the stars at night, she said, were plentiful and beautiful. To sustain her independent lifestyle though was getting tougher.

“Water, I can get it,” she said. “I can walk down the canyon to get the water. I’m not able to get as much water as I used to but I can get a gallon of water at a time.”

Apache County District 1 came to the rescue, according to Tółikán Chapter Manager Tovina Yazzie, who said the crew came on Sunday morning and started clearing a path.

Apache County crews focused on the roads that were flooded, Yazzie said.

Even though the roads aren’t county roads, Yazzie said the county came in and graded a path for residents to use.

For Alta Yazzie, life in Sweetwater is becoming harder. But she wouldn’t change it for the world – thanks to her resiliency, tenacity to live and to the monsoonal rains.