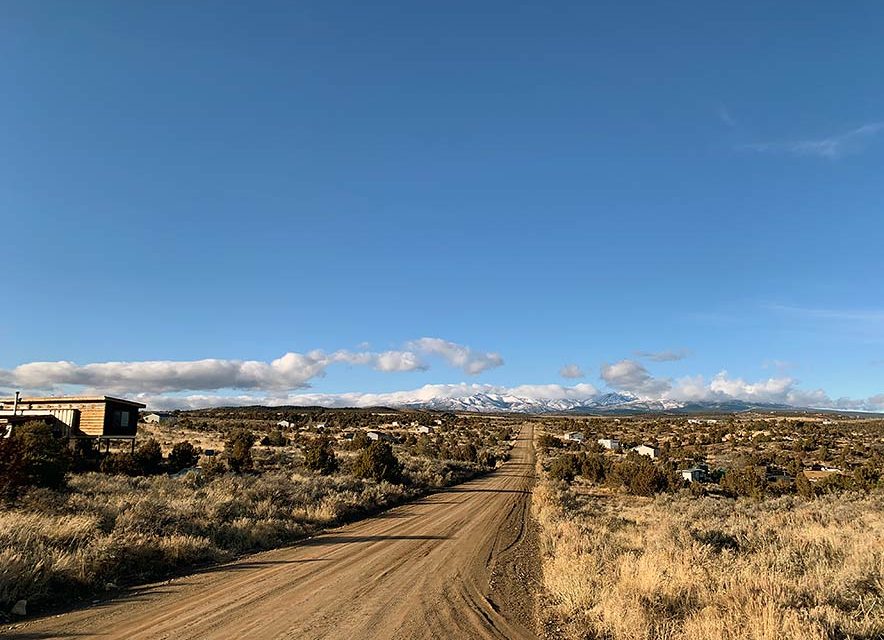 Courtesy photo | Utah Diné Bikeyah
The Westwater community on the edge of Blanding, Utah, has been without electricity or running water since its inception. There's now a collaborative move to run utilities to the Navajo village.

Utah Lt. Gov. Diedre Henderson took her first visit to Westwater Subdivision and listened to the Navajos living there argue “they’ll believe it when they see it.”

That sentiment to politicians, whether they be state, local, county or tribal, is a valid and much said one when it comes to the promise of getting water and electricity to those who live in the subdivision.

This chronic issue of Westward Subdivision, which is yards away from Blanding, Utah, is well known. It gets much attention, but no actual solution.

The 120 acres was purchased by the Navajo Nation in 1986 and still lacks basic infrastructure for the homes of 27 Navajo families.

“It was my first time there,” Henderson said. “It’s astonishing that in 2021 we have a community in this state that is in so much need. We are committed to solving the problem and get basic infrastructure and resources the community needs.

“I know that’s been promised for along time now but we are committed to bringing the parties together who are working on this and making progress to getting it done,” she said.

Other Utah politicians are familiar with the plight of Westwater. Oaks, who is also the chair of the Utah Navajo Trust Fund, said his predecessor, the former Utah State Treasurer David Damschen was very much involved.

“My predecessor really spearheaded this and was instrumental in getting donations from the state,” Oaks said. “It’s heart wrenching. I’m glad to see the momentum that has been built up over the last couple years, and I think COVID slowed things down a little bit. We are determined to keep things moving in the right directions.”

The Utah Legislature approved $500,000 in the state’s fiscal 2022 budget to help bring electricity to the Westwater Subdivision, which was then signed into law by Utah Gov. Spencer Cox.

Navajo Tribal Utility Authority is currently working with Utah Associated Municipal Power Systems and the city of Blanding on several options, including the possibility of extending power line infrastructure from Blanding’s electric system to the Westwater Subdivision.

Kenneth Marboy, chairman of the San Juan County Commission, told Henderson, Oaks and others in attendance that the people of Westwater Subdivision are forgotten and at this point are skeptical because of many broken promises that water and electricity will actually be brought to them.

“People should enjoy their lives like everybody else with running water,” Maryboy said. “The bottom line is no one wants to do nothing for them. We’ve been trying and asking what we can do to help these people and nothing has happened.

“You go over there if you ask them they’ll say, ‘If I get water then I get water, but other than that the hell with it,’” he said. “‘We’ve been sitting here for so long we are getting tired of it.’”

Albert Cly Jr. has lived in Westwater since 1948 and remembers when it had an abundance of cedar trees, shades houses and hogans as opposed to how the area looks today.

Even with the changes over the decades, one thing remains the same – Westwater still lacks running water and electricity.

Cly lived in Salt Lake City for work but when he retired 20 years ago, it was Westwater he retired to.

Describing the people who once lived in the area and who have passed on, Cly became emotional thinking of them and how they wanted running water and electricity.

“There’s no hope with the water,” Cly said. “To me I’ve been living here since 1948 and I watched the people suffer. We got a lot of flat land out here. If we had the water I know a lot of Navajo people would’ve liked to plant stuff there. I think they were wishing for that, but they’re all gone now.”

Cly continues to travel to Blanding to haul water but his niece, Cindy Gonzalez, helps him and other elderly with water hauling. She has done so for the past four years, since she moved back from Salt Lake City.

“It takes about an hour to do one load,” Gonzalez explained. “Get the tank, go to town, get it filled, come back, unload it, go back and keep doing the same thing.”

Nez said this is either the third or fourth meeting with Henderson and she’s been receptive to Utah Navajo resident issues. He said there are options to help with supplying Westwater with water, which include Blanding annexing Westwater.

Another option is paying $3 million to drill a well to get a water system there, but this would cost more if its not through Indian Health Service.

The issue with going through IHS is it already has a priority list in place, so this could take years.

If they go with a private contractor, it will likely cost more than $3 million.

The Navajo Department of Water Resources and Navajo Tribal Utility Authority are currently evaluating several options to determine the most feasible way of constructing the infrastructure needed to deliver water to the homes.

“We are here to let the lieutenant governor know that she is an intricate part of getting this project completely with her help,” Nez added. “There is a lot of tension still here. I think this could be a project that can heal a lot of that tension.

“(It) was an opportunity to show her the conditions that many Navajo families live in everyday and we know that this is the case for many people across the Navajo Nation,” he said. “By having everyone at the table together, we have a unique opportunity to deliver clean water to families and communities.”