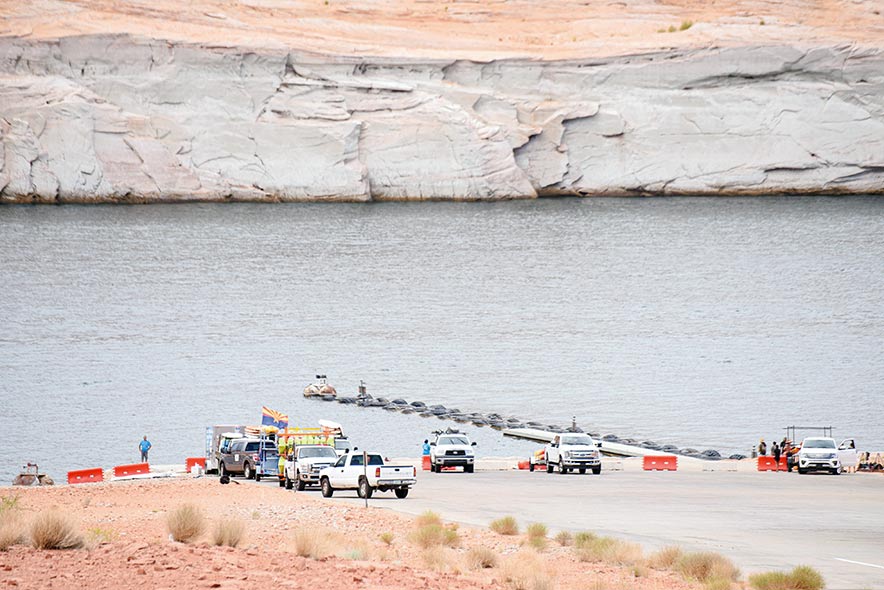 Navajo Times | Krista Allen
Non-motorized vessels such as paddlecrafts are launched at the Antelope Point Public Ramp in Jádí Tó. The public ramp is one of 11 ramps on Lake Powell. Climate change and megadrought have reshaped Powell’s shoreline.

As the water level in Lake Powell plummets, drought conditions persist, and the effects of climate change ramp up, it’s clear there isn’t enough water to go around.

Lake Powell serves as a “bank account” for the Upper Colorado Basin where water from the Colorado River is stored to meet obligations to the Lower Basin.

But a climate change-fueled megadrought – engulfing the U.S. West – is strangling the reservoir, which provides water for millions of people across several western states, including the Navajo Nation.

“That’s the biggest concern for livestock owners as the water drops,” said JoAnn Yazzie-Pioche, president for Łichíi’ii Chapter, who’s a rancher. “The people who haul water from town (the city of Page), that could cut down. That could happen.”

“A lot of (Diné) ranchers – and Diné businesses – haul water from the city of Page,” Yazzie-Pioche explained. “You could go to Coppermine Chapter where it’s groundwater, but a lot of us go to the Shell (convenience store on Coppermine Road) where there’s a water-loading station.”

Yazzie-Pioche said her chapter, along with the northwestern chapters, doesn’t have much access to the reservoir for livestock. The only access area would be at Tower Butte, northeast of Page, which is in the Ts’ahbiikin Chapter jurisdiction.

“Cows and wildlife would drink from there but now the water is so low,” Yazzie-Pioche said. “That’s going to make it harder for livestock that can get in there.”

The Colorado River Basin is the most over allocated water system in the world, according to a study by the University of California Irvine.

The study suggests that demand for this renewable resource will soon outstrip supply and limited groundwater reserves will play an increasingly important role in meeting future needs.

Using NASA satellites, the study found that over a nine-year period, from December 2004 to November 2013, the Colorado River Basin lost 17 trillion gallons of water.

During drought, its disappearance may threaten the long-term ability to meet future allocations to the seven Basin states. The contribution of local supplies, including groundwater withdrawals, will be required to offset anticipated shortages.

Yazzie-Pioche said the Western Waterline Project is still moving forward regardless of the low water level in Lake Powell.

The waterline project is for the 18 Western Navajo chapters to build new infrastructure and to help grow the Navajo economy, said Begay.

“There’s still quite a bit of lake level,” Yazzie-Pioche said. “When you’re in the main channel and you look at the dam. It’s still … deep.

The low water level in Lake Powell not only affects the nearby chapters and the Diné tour operators in Tsé’ésdooltas/Tsébii’ Hazdeestas and in Tsébighánlini, it also affects the city of Page, which rises and falls with the water.

But that number has lowered over the last year because of the coronavirus pandemic.

Because the Navajo Nation is seeing a spike in COVID-19 cases, it is still in the orange status as of Sept. 8, said Jared Touchin, spokesman for the president’s office.

“Because of the orange status, that means tourists are going to have to drop a little more,” Yazzie-Pioche said. “It’s been slow coming back. Of course, the Delta variant, people are afraid too.”

Yazzie-Pioche said she has seen a lot more visitors to the Page-Lake Powell area despite the coronavirus and the low water level in the reservoir.

“There is more visitation,” she said. “You can see it in the restaurants, the hotels – because one of the things about Page is it’s located within the Grand Circle. Because of the distances (between destinations), a lot of them come here to stay a night.

“Some just come for the tours and then move on to Las Vegas or wherever they’re going,” she said.

Page Mayor Bill Diak said the city’s economy is based on tourism. It used to depend on economic drivers for the region – the Navajo Generating Station and the Kayenta Mine.

“The city of Page itself doesn’t have a city property tax, so the way we run our city is from county tax money that is deferred back to the community, along with that the sales tax money,” Diak explained. “That’s how we run the city.

“With the economic impact of the lake being closed plus other things over the last year – and the loss of the NGS plant – we’re struggling.

“Our sales tax revenue, right now, based on 2019 is approximately 30 percent off,” he said, and that’s significant.

Will the city get all of that back?

Yes, in many years down the road because a lot of has to do with NGS, the coronavirus pandemic, and the loss of travelers to the region.

Diak said a great barometer for the city is Horseshoe Bend and the canyons in Western Navajo, both of which are the No. 1 destinations for tourists.

“Those two entities are what bring people here besides the lake,” Diak said. “So, you’ve got the lake, the canyons, and Horseshoe Bend. And the only one I can really judge is by looking at numbers at Horseshoe.”

The numbers are up a bit, but they are still off, said Diak, adding that the canyons were closed for 394 days, affecting the entire region.

The city of Page now relies on three components: the reservoir, Horseshoe Bend, the canyons. The fourth component was the plant.

So if water were taken out, it would put a stress on the city and the nearby Navajo chapters.

“There’s just no water. I think it’s slowly going to affect all of us,” Yazzie-Pioche said.