‘This year has been a challenge’: Domestic violence shelters face ongoing battle for money 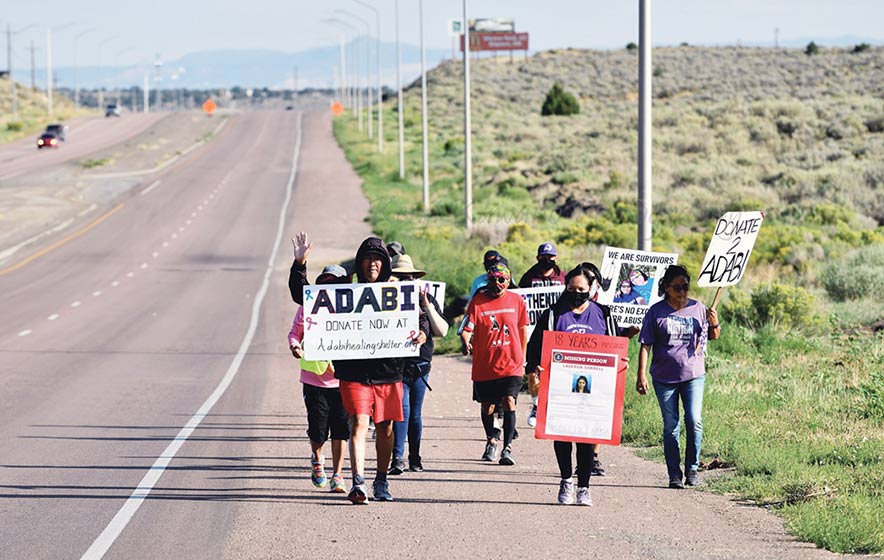 No thanks to the Navajo government’s red tape called the “164 review and signature process,” Amá Dóó Áłchíní Bíghan Inc. has managed to continue operating as it requested funds for the 2019-20 fiscal year.

Now that a new fiscal year is beginning, Lorena Halwood, executive director for ADABI, said she was told that they were “ahead of the game this year” and “money is available.”

Despite the reassurance, she said they have not seen a contract that says they’ll begin receiving funding by Oct. 1.

“I don’t really know at this time if we will be in the same boat because Navajo Nation Division of Family Services has not gotten the RFP (request for proposal),” Halwood said on Sunday. “This year has been a challenge because we are into a year starting tomorrow (Monday) without this funding.”

The 164 process, Halwood said, is when a contract is required to go through a series of “desk-hopping” to get the necessary signatures the agreement needs.

“When projects are funded by external sources, the Navajo Nation must accept the funds via the 164 process,” she said.

Before the contract reaches the president for signing, Halwood said, first a project sponsor receives a copy of the funding award letter.

The project sponsor then submits a scope of work to the funding source. That funding source then prepares the grant agreement then gives it to the Navajo Nation.

From there, the Capital Projects Management Department prepares the 164 review package, which contains the award letter, the grant agreement, the scope of work for the amount of the award, a budget plan.

The review and surname for the 164 package includes the Division of Community Development and the president’s office’s review and approval.

Once those steps are taken, CPMD then sends the package to the funding source, who, in turn, approves the agreement and sends it back to the Nation.

The Office of Management and Budget then issues a business unit number. It is sent back to CPMD, which then sends a letter to the project sponsor, informing that the money is ready for use.

And if everything is in order, CPMD authorizes the agency to use the money.

According to an executive order signed by then-President Ben Shelly in 2013, the 164 process designates the president as the chief executive officer and gives him “full authority to conduct, supervise, and coordinate personnel and programs.”

After those documents are in place, they are sent to the Department of Justice before being sent to the executive branch.

“As of last week, the contracts were still making their way through the 164 process,” Halwood said.

Halwood isn’t the only “project sponsor” who’s been knocking on tribal doors asking where her funding is.

The shelters at the time were asking when they’d get their annual funds from the Family Violence Prevention and Services Act.

Being “sub-recipients” of tribal contracts, Ellison explained to the HEHSC, made providing services much more difficult. For her, it was the contracting process, which she said has not been improved “over the years.”

Ellison said the frequent changes in program managers, late releases for requests for proposals, changes in the budget process, lack of discussion on program requirements and lack of notification on budget reductions worsened the process.

She recommended the committee review the 164 process and transition to an electronic system.

“When I started working with Battered Families, we started invoicing the Navajo Nation in October (2019),” she told the committee. “We did not receive payment until June of the following year.

“It’s a lifeline,” she explained, adding getting payment for her invoices six months later strained the shelter’s finances.

But “somehow, someway, by a miracle,” ADABI seems to have been able to continue providing services for its clients who reside in 15 chapters in the Chinle Agency, including Forest Lake, Black Mesa, Rough Rock, Round Rock, Lukachukai, Many Farms, Hard Rock, Piñon, Tachee/Blue Gap, Chinle, Tsaile/Wheatfields, Tselani/Cottonwood, Nazlini and Whippoorwill Springs, Halwood said.

She added that services include surrounding areas and sometimes helping DV victims takes them into New Mexico.

But nonprofit shelters pressing the tribe for Family Violence Act funding seems to be common.

Carmeila Blackwater, executive director of Tohdinassshai Shelter Home, which has been operating since 1982, told the HEHSC in 2018 they needed to receive the act’s payment in a timely manner for maintenance on their building to continue providing vital services to hundreds of clients.

According to Blackwater, from 2017-18 staff did more than 14,000 hours of public education and presentations on DV-related issues and provided shelter for 118 women, 159 children and 14 men.

Halwood said providing services in the midst of the pandemic made their work more dangerous.

She said ADABI got a call from the Chinle Comprehensive Health Care Facility’s emergency room of a domestic violence victim last Friday.

“ER called me at 8:30 p.m.,” she said. “I went up there, picked up the client. She was COVID positive. I transported her all the way to Kayenta.”

“DSS (Division of Social Services) does not see that,” she said, “they don’t see what we do.”

Halwood said she wore a surgical mask and a face cloth to transport the victim to the Tohdinassshai Shelter Home in Kayenta.

“We can’t say, ‘Hey you have a virus, we can’t transport you,’” Halwood explained. “No, she’s a victim running from her abuser and we have to help. That’s what we’re here for.”

Where is the money?

To date, none of the nonprofit DV shelters have gotten their share of the Family Violence Act money, which prompts Halwood to ask: Where is the money?

“We need somebody to look into it, we need a lawyer to look into this. We don’t even really know what this contract entails,” she said. “At that time, Eric Gale was overlooking these contracts, and he specifically told me that Navajo Nation, changed the — what is it called? — daily rate to a different rate.”

Gale is no longer employed with DSS, Halwood said.

Halwood’s big fear was if the $1.8 million in Family Violence Act money was not used, it could mean ADABI and other nonprofit shelters could be held accountable, and not the tribe.

“DSS is gonna move aside because (the act) is going to tell us, ‘We gave you this money, shelters. You guys didn’t use it. We just got it back,’” she said. “That’s my worst fear, that they’re not going to fund the tribe, again. It’s DSS’s fault.”

On Tuesday, the president’s office released a statement that proposed where the remaining $177 million in Coronavirus Aid, Relief, and Economic Security Act money would go. While $20 million was going to DSS, none of it is earmarked for the nonprofit shelters.

Halwood said she was not sure if ADABI would be getting any funding from the tribe this fiscal year.

And since finding out that it seemed none of the nonprofit shelters would receive CARES Act money, she wrote in an email, “Yah di lah!! So, whatever happened to our budgets we submitted??”