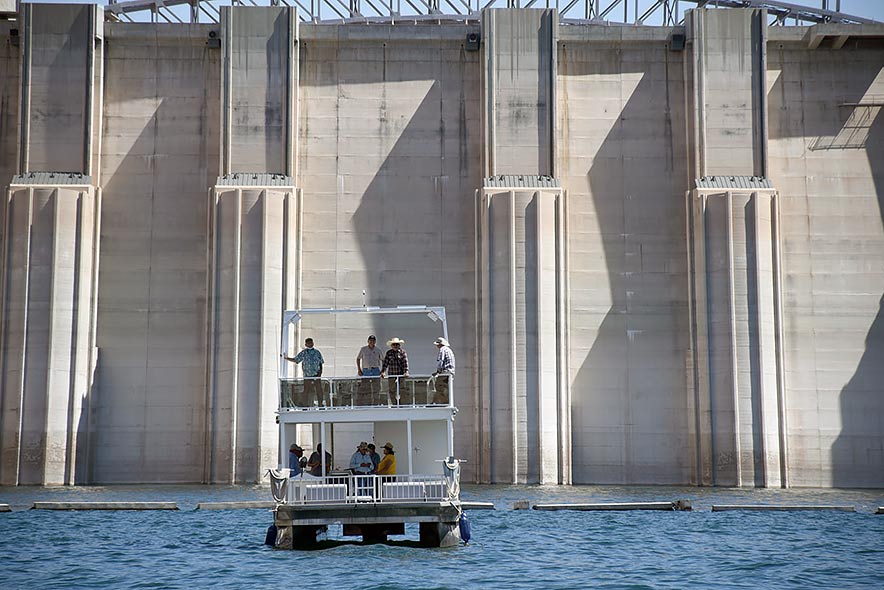 Navajo Times | Krista Allen
An Antelope Point Marina boat carries Council delegates and staff from the speaker’s office during a tour of Lake Powell on the Colorado River last Thursday. Participants who attended the Naabik’íyáti work session spent a day on the water to see the low water level, nearby canyons and Glen Canyon Dam.

The Naabik’íyáti’ Tó Niłtólí Task Force wants the Interior Department to return Parcel B lands to the Navajo Nation.

“What we’d like to recommend – and the task force has talked about this – is for the return of Parcel B,” said Leonard Tsosie, vice chairman of the task force, “and begin to discuss with federal officials – and if congressional legislation needs to be changed – to do that.

“It’s many acres and the Navajo Nation needs to touch the water again so we can begin to use it for economic development,” added Tsosie, a former Council delegate. “It doesn’t make sense to the task force and to us how we’re (not) allowed to touch the water.”

Tsosie said the matter is undermining the Nation’s economic and social developments.

He said once the Interior returns Parcel B lands, the communities of Oljato-Tsébii’ndzisgaii, Naatsis’áán-Rainbow City and others can use the lands.

Delegate Herman Daniels said residents of his NÁÁS chapters (Naatsis’áán, Ooljéé’tó, Shą́ą́’tóhí, and Ts’ahbiikin) need a road, among other development, but to do that Parcel B needs to be reverted to the Nation.

“Then the Navajo Nation will do its own development under its own laws and regulations,” Tsosie explained. “Today, you have to go to the National Park Service and do a concessioner agreement with them. That’s what’s going on at Antelope Point Marina.

“If Parcel B is returned, we don’t have to do that anymore,” he said. “That Navajo Nation’s laws and regulations (would) cover the developments to do that.”

The Jádí Tó area – Antelope Point – was withdrawn in 1958 through Public Law 85-868 for the Colorado River Storage Project.

Diné Bikéyah was compensated by a land exchange in Utah’s Aneth Strip.

Jádí Tó and the Dá’deestł’in Hótsaa townsite are known as Parcel A in the withdrawal act.

North and east of Jádí Tó the withdrawal included lands east to Goosenecks State Park – from the old Colorado River center line to the “contour line the elevation of which is 3,720 feet ….” This is known as Parcel B.

The Nation retains certain rights on parcels A and B, principally mineral rights.

The parcels were transferred from the Bureau of Reclamation to the park service in 1972 with creation of the Glen Canyon National Recreation Area.

“Antelope Point Marina is a concessionaire to the Navajo Nation, and it was an agreement that was made in 2000,” said Floyd Stevens, who’s on the Tó Niłtólí Task Force.

The agreement is composed of the Navajo Nation, the park service, the Bureau of Indian Affairs, and reclamation.

“That’s how (it’s) in operation here. But the park service has jurisdiction on Lake Powell,” said Stevens, a former Council delegate from Coppermine Chapter.

“If you go to see some of these areas, you can see some Anasazi ruins,” Stevens said, “and a lot of them are underwater. That’s past history, significant cultural areas, and historic sites – that’s the goal: to preserve and conserve.”

From Dá’deestł’in Hótsaa, the Lake Powell reservoir water backs up for about 186 miles, inundating some 96 named canyons.

Stevens said on the Navajo side, water backs up for about 136 miles, inundating about 42 canyons.

“And you’re going to be hearing a lot about elevation,” Stevens said.

Melvin Schoppmann, the director of business development for Antelope Point Marina, said the present elevation at the Navajo marina is 3,539, down about 160 feet.

During the Council’s tour of the river last Thursday, Schoppmann pointed out that the “bathtub rings,” a pale outline when the reservoir is below capacity, on the canyon walls shows about 160 feet below a full pool.

“If you take one-fourth of that, and then cut that in half, that’s Navajo’s boundary that starts up there,” he explained. “So, even when the water starts running over the dam, Navajo still can’t touch the water.”

The 1970 quadrilateral agreement and memorandum of understanding between the Nation and the three agencies for using Dá’deestł’in Hótsaa expired in September 2020, when the Council deliberated on a request for an extension because of the COVID-19 pandemic and to allow input from 10 of the 18 Western Navajo chapters.

The agreement preserveds the Nation’s rights, privileges and remedies by law and authorizes the Nation to construct, contract and manage the Tsé’naa Naní’áhí concession area, conditionally upon park service approval.

The agreement outlined rights and responsibilities to the development, maintenance and management of Jádí Tó.

“So many of us aren’t happy with this agreement,” Begay said t’áá Dinék’ehjígo. “Even so, it expired in September 2020.

“The marina belongs to the Navajo Nation, yet we don’t know much about it,” he said. “There are many problems there. Antelope Point Marina is not excluded from those problems, so the task force is dealing with those things.”

Tsosie said the task force had various discussions on the agreement.

“At times, we went into executive sessions,” Tsosie said. “In broad terms, a long time ago, there was dam, no Lake Powell, no Glen Canyon Dam, (but) there was the Colorado River.

“If you look at the executive order lands, the (Navajo) boundary at that time was mid channel of the Colorado River,” he explained. “So, half of it is (Navajo). Down the road, we’ll be talking about that.”

Tsosie said building a dam was discussed in the 1950s, when the federal government approached the Nation. The Council at that time discussed the project with the Bilagáana and set the ball rolling.

“That’s when they brought up the subject of land exchange between McCracken Mesa and the land where the dam sits,” Tsosie explained. “So, if you look at the language of all these things, one of the things that happened at that time, we don’t know if there was a specific direction.

“We don’t think so because the Navajo leaders were asking for access to the water – at least to the shoreline,” he said.

“When it came about, the final thing that happened, there was an elevation that was established at 3,720,” he added. “Just to use it as an example: if you go with what the federal legislation says, the water will never touch the Navajo Nation.”