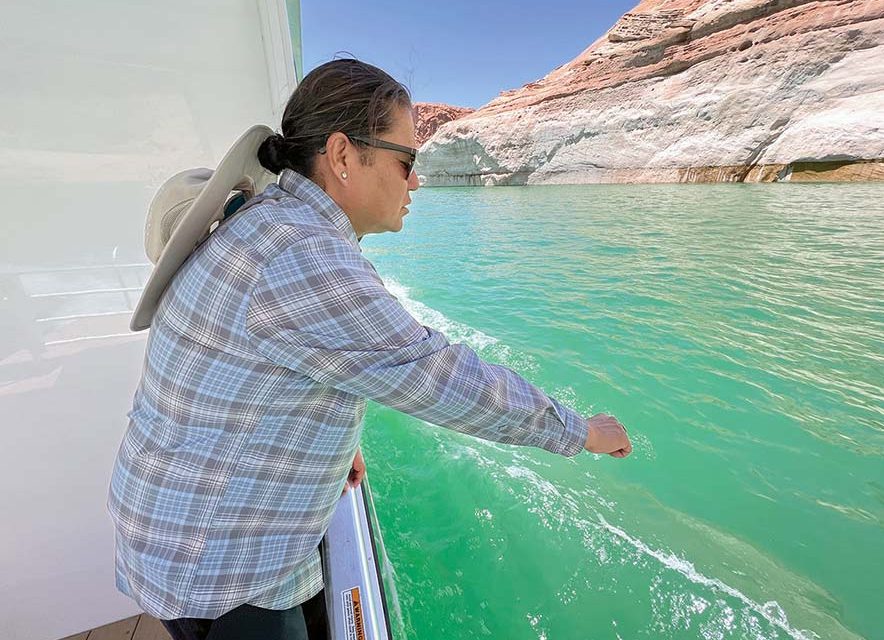 Delegates who attended the session first met inside Antelope Point Marina’s floating restaurant, after which they toured the floating village to see safety and shoreline issues with the Glen Canyon National Recreation Area.

Delegate Paul Begay Jr. said his colleagues visiting the area is the first step in protecting the sovereignty and the economic interests of the Nation.

“We need to work together with the Department of the Interior to provide a stable future for our Navajo people who are directly impacted by the receding water levels of Lake Powell,” Begay said.

“So, at one time, in the 1980s, the dam did fill up only one time,” Tsosie said. “Even at that time, the water was not reaching the Navajo Nation because there’s a five-foot difference.

“It’s intentional to have Navajo Nation not touch the water,” he said. “So, we believe that the Navajo leaders thought they’d be able to use the water. That’s when the drought came in and the water started going down.”

Tsosie said the lowering water levels is a big issue, especially for the Nation. He said if the drought continues, it could reach “dead pool,” where the water no longer goes through the dam.

Melvin Schoppmann, director of business development for Antelope Point Marina, said when the Nation and the park service in March 2001 selected Paradise Valley, Ariz.-based Antelope Holdings LLC to develop and operate the $75 million marina and resort, there was no much on the site.

“It was the largest platform at the time in the U.S., at the time it was installed,” Schoppmann said. “The project, it had two purposes – it’s referred to as a Navajo site and Navajo jobs and Navajo economics.” 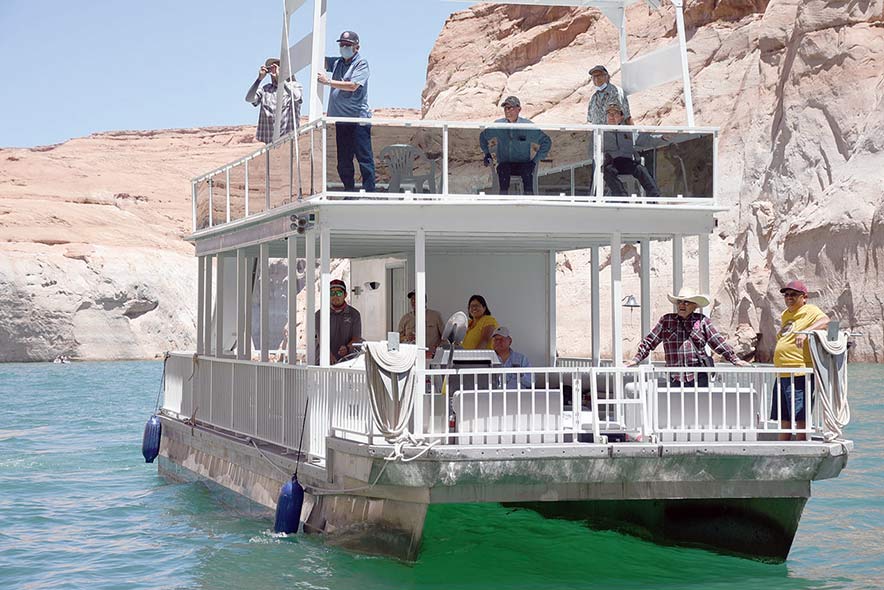 But the issues here, Schoppmann said, are frustrating for visitors.

“Since we can’t launch the bigger boats here, we’ve actually lost customers to other marinas,” he said.

The marina employs about 350 employees, a majority of which are Native Americans and some who travel a long distance for work every day.

“It’s very tough to make sure that everybody is safe,” said Kelleroy Bennett, who runs the maintenance crew at the marina. “Park service makes it very hard for us – it does. So, it’s very hard to comply with everything.”

During the tour, some of the delegates took a dip in the water and had lunch near Navajo Canyon.

“This is the best work session ever!” shouted Delegate Nathaniel Brown, who offered tá’dídíín to Tooh Bikooh.

“This is how we unwind,” Begay added.

Another delegate joked the delegates were using American Rescue Plan Act money to travel on the river.