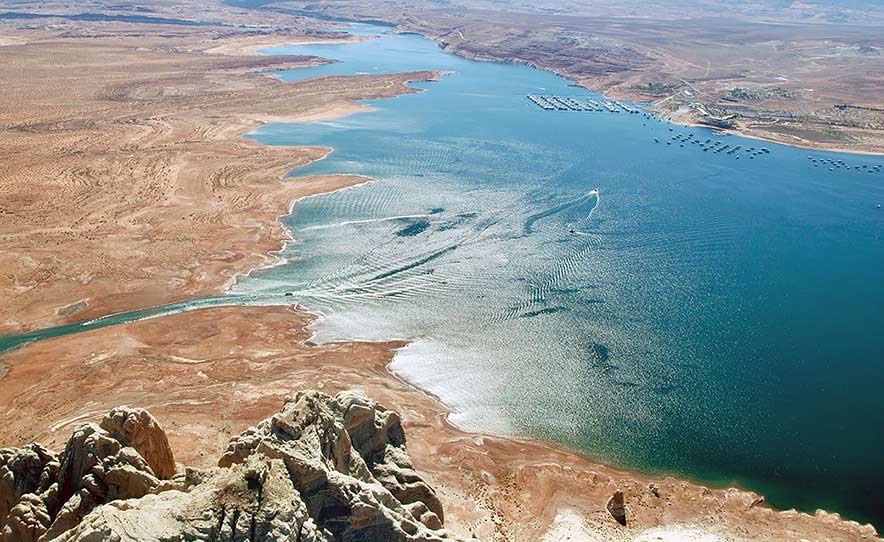 Navajo Times | file
Lake Powell glistens on the Utah-Arizona border. The state of Utah recently settled its water rights claims with the Navajo Nation, leading to hope that a similar settlement could be made in the Little Colorado River basin.

Two days after Christmas President Donald Trump finally signed the omnibus appropriations package totaling $2.3 trillion. The omnibus bill includes $1.4 trillion for federal spending and $900 billion for COVID-19 relief, which was approved by the U.S. House of Representatives and the U.S. Senate on Dec. 21 along with the water rights settlement.

This settlement has been years in the making. It settles all current and future claims by the Navajo Nation for water rights within Utah; confirms the Navajo Nation’s right to deplete 81,500 acre-feet of water per year from Utah’s Colorado River Basin apportionment; and authorizes approximately $220 million for water infrastructure to provide clean drinking water to Navajo communities in Utah.

“It was a big effort by Navajo. It’s been in the works for so long,” said President Jonathan Nez, who remembers this settlement being in the works even before being elected as a Navajo Nation Council Delegate.

“I remember when I was on the Council for Shonto only, we were talking about that too,” said Nez. “When the reduction happened from 88 to 24, I represented two Utah chapters, Oljato and Navajo Mountain, by then I was really thrown into it.”

Nez said that Utah Gov. Gary Herbert was key to the bill’s passage. In a release Herbert stated it represents 15 years of “good faith work between our governments.”

In 2003, a memorandum of agreement between the Navajo Nation and the state of Utah allowed the two sides to formally enter into discussions to determine the water rights of the Nation.

After two work sessions and other lengthy discussion to accept the proposed agreement, the 23rd Navajo Nation Council passed it. Bates remembers some delegates were “threatened” if they voted green.

Andrew Curley, assistant professor in the School of Geography Development, & Environment at the University of Arizona, has some qualms about the landmark settlement.

“Water settlements are like treaties and always come with concessions,” said Curley. “Unfortunately we have a political culture that doesn’t discuss the costs of settlements, costs like future and expanded claims to water, priority rights, who gets water first in times of drought, or even how sometimes water settlements impact our land claims through legal chicanery.”

He added that the Utah settlement appears to be better than past proposals, in terms of quantity of water and trade-offs. But the Navajo Nation has to remember that the state governments stole all this water in the first place, he said.

But Bates and Nez both said the settlement could lead to resolving the Navajo-Hopi Little Colorado River Water Rights Settlement.

“It picks up the momentum to resolving the Arizona water rights … It’s stalled over here,” said Nez. “Now that you have one Indian water rights settlement approved for Navajo at this time frame, (it) will actually get us to start up negotiations now.”

Bates said the Arizona settlement would require more strategy and negotiation. But for now the Utah Water Settlement will be able to address the more than 40 percent of Navajo households in Utah that lack running water or adequate sanitation.

“We can lease the water if we aren’t using it … but we still have priority water rights,” explained Nez. “For Navajo Mountain and Oljato, there’s money there to get water into those communities. When we say 30 to 40 percent of our Navajo people don’t have running water, that will change for the Utah chapters.”