A controversial referendum that could have led to a change in San Juan County, Utah’s form of government appears to have lost, but narrowly. 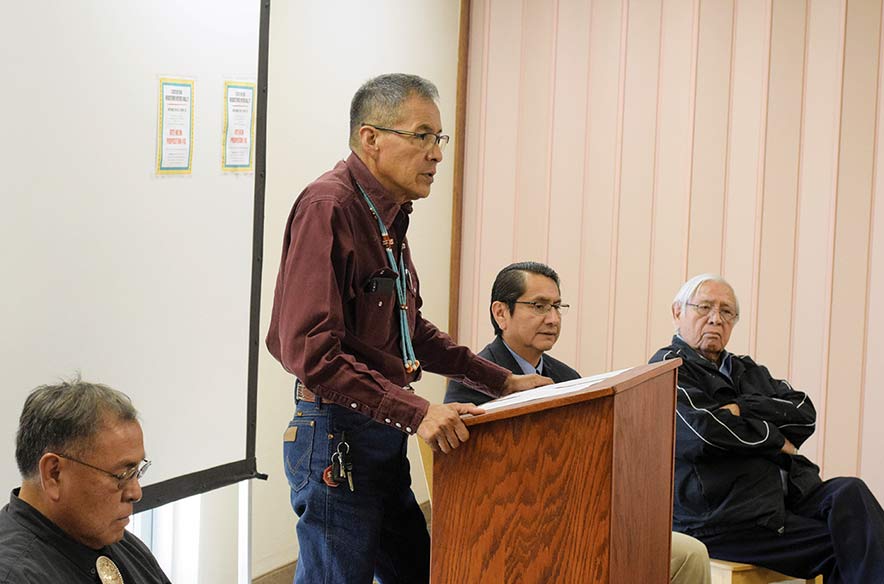 San Juan County (Utah) Commission Chairman Kenneth Maryboy attends a press conference to get the word out to San Juan County voters to vote “no” on Proposition 10 during a special election on Nov. 5.

The proposition would have authorized the appointment of a committee to study changing the county’s governing body, now a three-member commission, to a larger commission, a mayor-council form of government or a county executive overseen by a commission.

San Juan County’s two Navajo commissioners, Kenneth Maryboy and Willie Grayeyes, had opposed the initiative, saying it was an obvious attempt to dilute the power of the county’s first-ever majority-Navajo commission.

Blanding Mayor Joe Lyman, one of those who had circulated the petition to get the referendum on the ballot, said that wasn’t his intent and he was merely trying to institute a more representative form of government for the county.

In a telephone interview Wednesday, Lyman said he wouldn’t press the issue again.

“The voice of the people is paramount, and if the people don’t want to investigate other forms of government, then that’s it,” he said. “What concerns me is that if it goes the other way, the other side has stated they would initiate a lawsuit. I believe these matters should be decided democratically, not in the courts.”

Maryboy called the vote “unprecedented” and declared, “Today is a good day.”

Davis Filfred, chairman of the board of Utah Diné Bikeyah, a nonprofit that opposed Prop 10, said efforts by several groups to educate and register Navajo voters paid off.

“A lot of people do not agree with this study idea or other ploys to take away our voice. They’re finally waking up. They’re finally realizing that voting is a tool and we need our voices,” Filfred stated in a press release from UDB.

County Clerk John David Nielsen had come under fire from the American Civil Liberties Union during early voting by displaying copies of a letter to the editor by Lyman supporting the initiative at polling places.

Nielsen had later removed the letters, after saying he was only trying to help voters understand the issue, according to the ACLU.

Maryboy and Willie Grayeyes were elected last year after a federal judge found that the county’s existing voting districts disenfranchised Native Americans and appointed a special master to draw new ones.