‘We embrace this day as ours’ 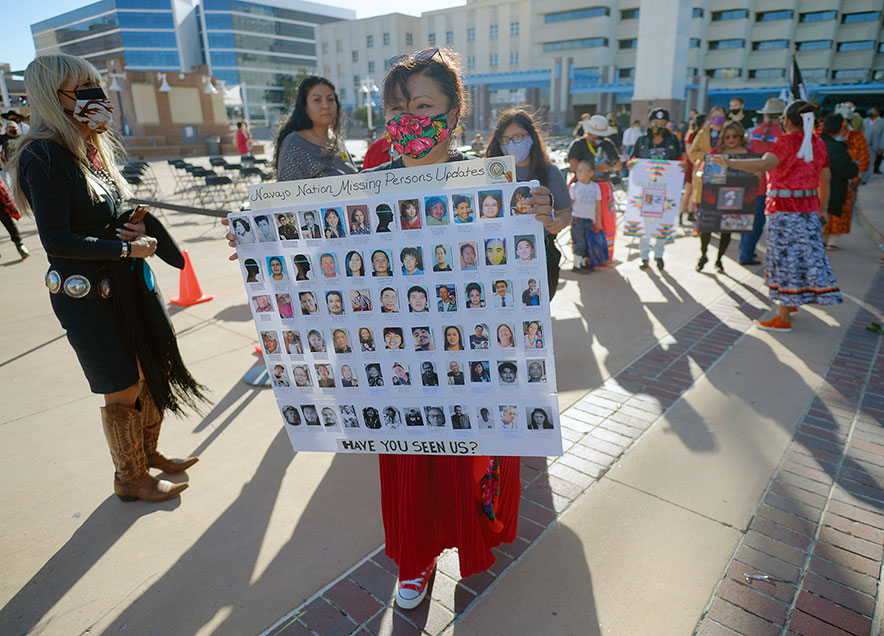 Navajo Times | Donovan Quintero
Meskee Yatsayte, founder of the Navajo Nation Missing Persons Update, carries a poster covered with photos of missing and murdered Navajo people as she participates in a walk on Indigenous Peoples Day in Albuquerque.

Perhaps Tre Riley explained it best when he shared the core values for which his Zuni heritage taught him to strive.

Wearing his turquoise necklace and headband, Riley spoke on Monday at the University of New Mexico Student Union about what Indigenous Peoples Day means to him.

A fourth-year student, majoring in physical education, the Zuni native said he thought long and hard for four days about what it meant to him.

Riley, 24, said he was not sure which direction he would be taking when he graduates. He is certain he wants to work at a Native-based school as a physical education teacher.

When he was asked to give a speech at a KIVA Club-sponsored event, it got him thinking about what he what he wanted to share.

He saw his poster, the teachings he said he read every day, hanging on the wall at his home.

“I realized, ‘Well, I have it right here, why not just share with the people, share with my Native brothers and sisters and my relatives and non-Indigenous people?” he said. “Let me share these values that I grew up with that we still have to this day.’”

Amid chitter-chatter of the crowd, Riley held up a poster with several Zuni teachings written on it. Three of which, he said, shaped him into the person he is now.

“Hon dewulashshi’ iwillaba’ a:ho’ik’yanna,” he said in his Zuni language. “It translates to, ‘We will be kind and generous one another.’

“Why that means so much to me is because I grew up in a family where we worked with what we had,” he said. “My mother taught me that no matter how much you have, you always have enough to give to others as well. And I hold that to my heart and I will continue to live by those words.”

According to Malinda Maynor, University of North Carolina at Chapel Hill history professor, Indigenous Peoples Day became an alternative in the late 1980s.

Maynor said Benjamin Harrison, who was the 23rd U.S. president, from 1889-1893, proclaimed Oct. 21 to be an anniversary that would celebrate Columbus’ discovery of America.

The proclamation, which was approved by a joint resolution, said Oct. 21 would become a “general holiday” for the country.

“Columbus stood in his age as the pioneer of progress and enlightenment,” the proclamation read. “The system of universal education is in our age the most prominent and salutary feature of the spirit of enlightenment, and it is peculiarly appropriate that the schools be made by the people the center of the day’s demonstration.”

How most of the country and the world view Christopher Columbus, the discoverer of America, differs starkly from how Indigenous communities remember him. First, Columbus did not discover America.

Riley did not mention Columbus. Instead, he said he wanted to focus on his Zuni teachings.

The second teaching Riley said was about honesty and trustworthiness.

“Hon iyyayyumolena a:ho’ik’yanna,” he said in his language. “It means we will be honest and trustworthy towards one another.

“I believe that it’s been, so it’s been a hard time growing from where I come from,” he said. “And I believe that trustworthiness, being honest, was a hard thing for me growing up. And I think being able to be trustworthy towards other people, again, that ties into yourself, you know you can trust yourself.”

The third teaching he said everyone should brush up on.

“I think it’s one of the most privileged things that somebody can have is listening,” he said. “Yu’hadiyahk’yana:we.

“It means listening or paying attention to, to anybody who’s speaking,” he said. “Sometimes I have to zone myself back into with somebody, somebody’s talking, whether that means putting my phone down, putting whatever I’m doing on a table and say, ‘OK, I’m going to listen to what you have to say to me.’”

Before he concluded his speech, Rily said, “We, Indigenous people, carry strength and resilience in our DNA. It’s innate.

“We embrace this day as ours and celebrate because there was a time when we couldn’t celebrate like this,” he said, “and we didn’t have to, but now we are.

“We’re still singing our songs,” he said. “We’re still dancing to those songs. We’re still teaching and learning from one another and saying our prayers.

“Taking care of Mother Earth,” he said, “and the land that she provides to us. And we shall continue to do so for the remainder of time.”