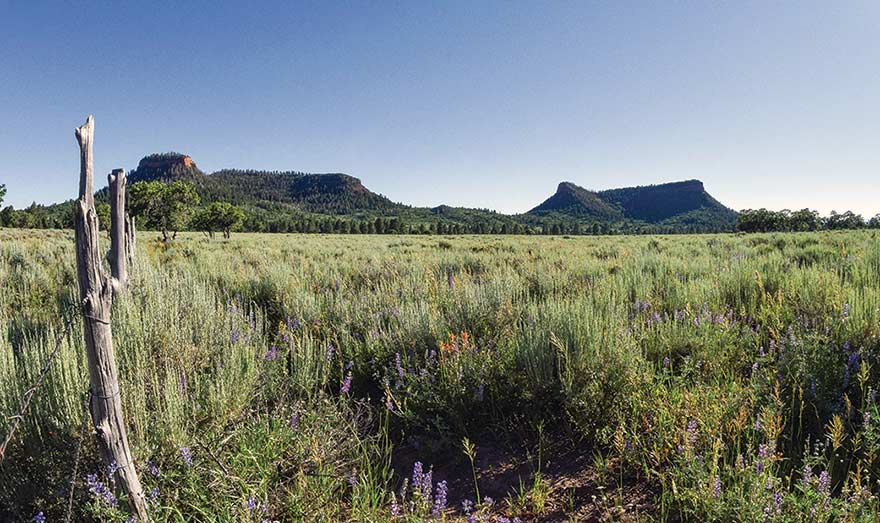 President Joe Biden on Friday restored environmental protections to two national monuments in Utah at the center of a long-running public lands dispute.

The Biden administration on Oct. 7 announced it would expand the size of Bears Ears and Grand Staircase-Escalante national monuments and a marine monument off the New England coast, all drastically reduced by former President Donald Trump.

These protections provide a bridge to the past, but they also build a bridge to a safer and more sustainable future, said Biden, during a proclamation-signing ceremony at the White House.

President Jonathan Nez attended the ceremony with several leaders from the Bears Ears tribes and some Utah Democrats.

Both monuments were created by Democratic presidents and totaled more than 3 million acres. Trump’s actions sharply reduced their size by some two million acres, the largest rollback of federal land protection in the nation’s history.

Trump slashed Shash Jaa’ by 85% and Grand Staircase-Escalante to about half, arguing that the previous administrations had abused their authorities.

An elated Davis Filfred, the board chair for Utah Diné Bikéyah, said this announcement is a long time coming and hopes this is the end of the political ping-pong – used as a quick fix under the 1906 Antiquities Act – and the beginning of restoration between people who remain divided on monument designations.

The Antiquities Act permits presidents to protect “objects of historic and scientific interest” on federal land without input from Congress.

But the fight continues, said Mark Maryboy, board member for UDB.

“I’ve been waiting, waiting and waiting for the news,” Maryboy said. “And I am extremely happy and elated to know that (Bears Ears) has been restored.

“The (fight) will continue because the opposition are talking about a lawsuit,” Maryboy said, “It’s going to be extremely difficult to undo because we’re talking about the Antiquities Act, and that belongs to everybody in America.”

Maryboy said there was a celebration for Shash Jaa’ at a Radisson hotel in Salt Lake City and a celebration at Moki Dugway/Muley Point in Bears Ears on Oct. 8.

Maryboy said he’s committed to retiring and resigning from some of the environmental boards and committees on which he serves.

“I feel like I’ve accomplished what I needed to do,” Maryboy added.

“From the beginning of his presidency, we have been clear about our willingness to work with him on a permanent legislative solution,” the delegation said in a statement. “It is disappointing that these calls were ignored, and a route was chosen that will only delay needed permanent protections and resources for these areas.”

They said that Biden’s proclamation perpetuates a cycle of abuse under the Antiquities Act, which ignores the rights and the will of Utahns, to the detriment of the lands and those whose lives are most intertwined with them.

“For years, we have fought to give Utahns a say in the care and the management of our lands,” they said. “Biden had the opportunity to give us just that. Though he has so far passed that up, we will not stop making sure Utahns’ voices are heard loud and clear.”

“The president’s decision to enlarge the monuments again is a tragic missed opportunity,” Cox said in a statement. “It fails to provide certainty as well as the funding for law enforcement, research, and other protections which the monuments need and which only congressional action can offer.”

A statement to the Navajo Times from the White House read: “By restoring these national monuments, which were significantly cut back during the previous administration, President Biden is fulfilling a key promise and upholding the longstanding principle that America’s national parks, monuments, and other protected areas are to be protected for all time and for all people.”

Adakai is a former member of the Bears Ears Inter-Tribal Coalition.

“But the fight will still be there,” Adakai said in an interview. “I thank the prayers and support offered by the people of five tribes – Navajo, Hopi, Zuni, Ute Mountain Ute, and the (Ute Tribe of the Uintah and Ouray) – during our uphill battle advocating to restore and expand Bears Ears National Monument.”

More than 420,000 people are estimated to have visited Shash Jaa’ region last year regardless of the coronavirus pandemic.

Visitors continue to leave trash, loot fossils and remnants, and they are still scribbling graffiti over petroglyphs, said Filfred and Adakai, both of whom know the area well.

This means that the Shash Jaa’ region still faces lingering threats from Trump’s rollback, including from mining claims and a management plan.

In June, Interior Secretary Deb Haaland, who visited the two Utah monuments, advised Biden to restore the original boundaries of the monuments.

“I am proud to stand with President Biden in restoring these monuments and fulfilling his commitment to the American people,” Haaland said in a statement to the Times. “On my visit to Utah, I had the distinct honor to speak with many people who care deeply about this land.

“The historical connection between Indigenous peoples and Bears Ears is undeniable,” she said. “Our Native American ancestors sustained themselves on the landscape since time immemorial, and evidence of their rich lives is everywhere one looks.

“This living landscape must be protected so that all Americans have the profound opportunity to learn and cherish our history,” she said.

Haaland was welcomed home to Shash Jaa’ during her visit to the region.

President Jonathan Nez on Thursday night said his administration is excited that action would be taken by the Biden-Harris administration with the guidance of Haaland and the coalition of tribes and other stakeholders.

“The protection of Bears Ears has been fought for by many tribal nations for many years,” Nez told the Times. “We fully support the expansion of Bears Ears. It’s a win for our people, our ancestors, and generations to come.”