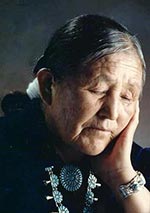 FARMINGTON — Funeral services for Margaret Yazzie, 94, were held Nov. 20 at the United Pentecostal Church in Farmington. Interment followed at the Kirtland-Fruitland Cemetery in Kirtland, New Mexico.

Margaret learned to weave as a young girl and achieved the highest status attainable in her art form, an award-winning master Navajo weaver, specializing in the Two Grey Hills style of tapestry weaving.

Born and raised in Newcomb, Margaret married Wilson Yazzie. They shared an amazing life together until his death in 1987, raising 10 children and building a home in Newcomb.

Margaret’s skills were derived from a quest for perfection, evident in each one of her rugs. She instilled her rug weaving skills into her daughters and grandchildren. Her weavings were bought by many. A quote by the late Dr. Arch H. Gould, “Dear Margaret, your best rugs are possibly the greatest woven today. You are a great weaver and teacher.”

The majority of Margaret’s rugs were collected by the late Arch H. Gould and donated to the Grand Junction Colorado Museum. Her love of weaving has created many treasures for people who loved her art. She has touched countless lives and made many friends through her unique, extremely rare, highly sought after Two Grey Hills tapestries. Many of her tapestries have been showcased throughout the world in museums and numerous book publications.

Margaret was also an avid seamstress in which she took great pride and creativity. She made her own clothing and for her children. She also made many quilts to raise money for her church.

Margaret was a Gold Star Mother, losing a son killed in action in the Vietnam War has changed her life forever. She was never the same afterwards. She participated proudly in the local Newcomb Veterans Organization.

Margaret was happiest when she cooked a Sunday meal for her entire family, a tradition of family gathering after every Sunday morning church service. She was a devout Pentecostal and proud member of the Newcomb Lighthouse United Pentecostal Church.

She read her Bible every day in Navajo and attended church faithfully until her health made her unable, a habit developed in her mind was always on the Lord. Always bold to share the “Truth” with others and how beautiful it is to serve the Lord and Apostolic of “Oneness.”

Margaret witnessed to many people everywhere she went. She was baptized, along with her children, at Captain Tom Lake in Newcomb, by the late Rev. Bill. D. Havens on June 12, 1966. She never wavered from the Lord. She always made sure the church was cleaned and ready for the next service. She always paid her tithes and made her trips Sunday mornings to pick up people to attend church.

What a legacy, II Timothy 4:7-8 (KJV), “I have fought a good fight, I have finished my course, I have kept the faith: Henceforth there is laid up for me a crown of righteousness, which the Lord, the righteous judge, shall give me at that day.”

Margaret was loved by her family, friends, the community, and the lives she touched through her ministry.

Kirtland Cope Memorial was in charge of arrangements. 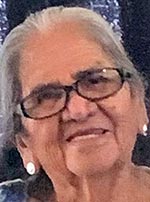 Sarah attended Fort Wingate High School and Bacone College in Oklahoma. She retired as a residential aide (dorm parent) from Greasewood Boarding School and worked as a nurse at Fort Defiance Indian Hospital.

Sarah enjoyed Ganado Hornet sports and watching her children and grandchildren from Cornfields/Ganado. 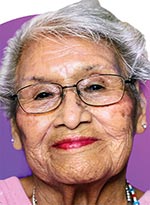 FARMINGTON — Our family wishes to announce the sudden death of our mother, Bertha Mae Lee Gleason, 88 years of age.

Bertha was born to David Lee (Bit’ahnii) and Marie Ute Begay (Hashk’aan hadzoho) in the Red Mesa, Arizona, area around the time of Dec. 13, 1932.

Our mother lived a full life, which began her humble beginnings on the Navajo Reservation in the Red Mesa, Little Water and Teec Nos Pos, Arizona, areas. Her grandmother, nalí Mae Denetchillie, raised her and she would call her grandmother “shi ma.”

All across these lands as a young child Bertha endured the hardships many faced such as no electricity and no indoor plumbing. Her daily life was a life of survival as she tended to herding sheep, collecting firewood and water for her family, but there were times she and her numerous cousins would find time to play as the sheep would graze or as she walked to fetch water and wood.

Bertha completed a 3rd grade education at the Phoenix Indian School when she graduated at age 18. After working as a nanny for a senator in Colorado, she left for a trade school in Cleveland, Ohio, to learn to be a seamstress.

Bertha eventually returned to Teec Nos Pos, Arizona, and then moved to Farmington, where she lived out the rest of her days.

Bertha loved traveling and, for someone who did not own a car nor knew how to drive, she traveled far. Whether on foot, in someone’s car, a train, or plane, she traveled as far west as Hawaii and as far east as West Virginia.

Bertha’s love of music ranged from Hank Williams Sr. to Elvis to The Fenders and traditional Navajo song and dance songs, as well as peyote songs.

Bertha had open arms for anyone who visited her home where she would provide her visitors with a hot meal and a place to sleep if need be. She loved her children, grandchildren and great-grandchildren so very much. She could strike up a conversation with anyone and become instant friends. She had endearing names such as Aunt Bert, Grandma Bert, The Secretary, Bertie, Tweet Tweet, and Shi’ma.

We’ll miss our mother but she’s in a far grander place now and is with previously departed loved ones, especially her father and nali. We love you forever Shi’ma. 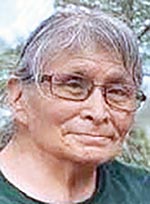 CAMERON, Ariz. — Funeral services for Betty Mae Lee, 70, of Cameron, Arizona, will be held Tuesday, Nov. 30, at 10 a.m., at the Cameron Full Gospel Church. Burial will follow at the Cameron community cemetery.

Betty was born Aug. 22, 1951, in Tacoma, Washington, into the Dziłt’aadí Kinyaa’áanii (Near the Mountain Clan/Towering House Clan), born for Tsi’naajinii (Black Streak Wood People Clan). She passed away peacefully in her sleep on Nov. 18, 2021, at her home in Cameron.

Betty suffered from an illness known as dementia that had a huge affect in her health and everyday life. Although this disease took our mother away from us, she never gave up and fought for her life until the very end.

Betty was a hardworking woman. She worked many years at Cameron Trading Post as a cleaning lady. Due to her health she had to stop working and stayed home.

Betty loved being a grandmother. She was a strong Christian woman and always believed in God. She attended the Cameron Full Gospel Church and Nazarene Church.

Betty was married to Jimmie Lee for over 40 years. She loved to sing gospel music and spend time with her husband. Together they had four children and traveled many places.

Betty loved life, but most of all, she loved her family and seeing her children all together in her home was her dying wish. She will be dearly missed.

A drive-thru reception will take place at the Lee residence (one mile northwest of Cameron Trading Post), following services.

Donations will be accepted through Zelle at 602-489-9281. Checks can be written to Valley Ridge Mortuary and cash can be dropped off at the Lee residence. For more information, contact the family at 928-401-7234.

A car wash and food sale will be held Saturday, Nov. 27, with location to be determined.

The Lee family would like to thank everyone for their love and support in their time of need.

Valley Ridge Mortuary is in charge of arrangements. 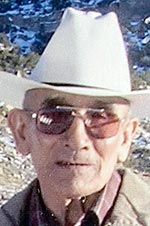 Gene worked for the Santa Fe Railroad from the time he was 16 years old until 1970. He loved his cattle and dogs, enjoyed herding sheep and being outside.

Gene is preceded in death by his daughter, Delene Pinto; and son, Nicholas Claschee. 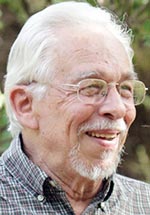 John’s family moved to Tempe, Arizona, in 1959 where he was a catcher on the Tempe High School varsity baseball team for three years.

After high school, John married Sylvia Begay and moved to Los Angeles to attend the University of Southern California. He graduated from USC with a degree in industrial design. One of his first jobs was as a computer programmer for a CAM manufacturer of aerospace parts in Los Angeles.

In the 1970s, John and his family moved to Window Rock, where he retired from the Navajo Nation Department of Water Resources in 2008 after 25 years.

John was an excellent painter who specialized in watercolors and was an avid hobbyist, working model kits, making cars and toys out of wood and aluminum cans, exploring radio-controlled cars and airplanes. He enjoyed fishing, gardening, and auto racing.

John is preceded in death by his parents, Martha K. Radcliffe of Waco, and John Carroll Radcliffe Sr. of Eagle River, Wisconsin; and grandson, Harley Jackson of Phoenix.

A private memorial service will be held in Phoenix. Cremation has taken place and his ashes will be scattered at a later date.

Donations may be made in John’s name to: Mountain Artist Guild, 228 N. Alarcon St., #B, Prescott, AZ 86301, https://www.mountainartistsguild.org/donate.

Billy worked for Santa Fe Railroad and was a representative on the Grazing Committee, a member of the Chinle School District Board, and president of Tselani/Cottonwood Chapter.

Billy is preceded in death by his wife, Jean Nez; daughter, Jessie Nez; and sons, Robert Nez and Alfred Nez.

CORTEZ, Colo. — Funeral mass for Damon Henry Tso Sr., 95, was held Nov. 19 at the St. Margaret Mary Catholic Church in Cortez, Colorado. He was laid to rest in Cortez.

Damon was born in Teec Nos Pos, Arizona, on Sept. 15, 1926, during the fall harvest. He was born into the Hashk’ąą hadzohí (Yucca Fruit-Strung-Out-In-A-Line Clan), born for Kinłichíi’nii (Red House People Clan). He died Nov. 16, 2021, at his home in Buffalo Springs, New Mexico, surrounded by family.

Damon attended school at Emmanuel Mission in Teec Nos Pos, where he went up to the third grade. He left school after the death of his mother at the age of 8. Thereafter, he was lovingly raised by his sisters, grandparents, and numerous aunts and uncles.

Damon worked over 30 years and retired from the Bureau of Indian Affairs. He worked at numerous sites, including Shiprock, Tuba City, Kin Dah Lichii, Fort Defiance, and the old Tohatchi Boarding School, eventually retiring from Chuska School in 1988.

It was during this time Damon met his wife, Annie. They met on a blind date and later married and raised their children in Tohatchi and Buffalo Springs.

Damon held various positions such as custodian, truck driver and maintenance man. He was a rancher, gardener and loved to tease his relatives. He had many friends from all walks of life.

Damon lived the corn pollen path and was traditional. He was a roadman in the Native American Church and worked closely with NAC board members to petition and advocate for the protection and use of peyote and religious freedom for Native Americans.

Damon was also Catholic and a member of St. Mary’s Parrish in Tohatchi, where he celebrated, worshipped and had immense faith in the Creator.

Services were entrusted to Desert View Funeral Home in Shiprock.