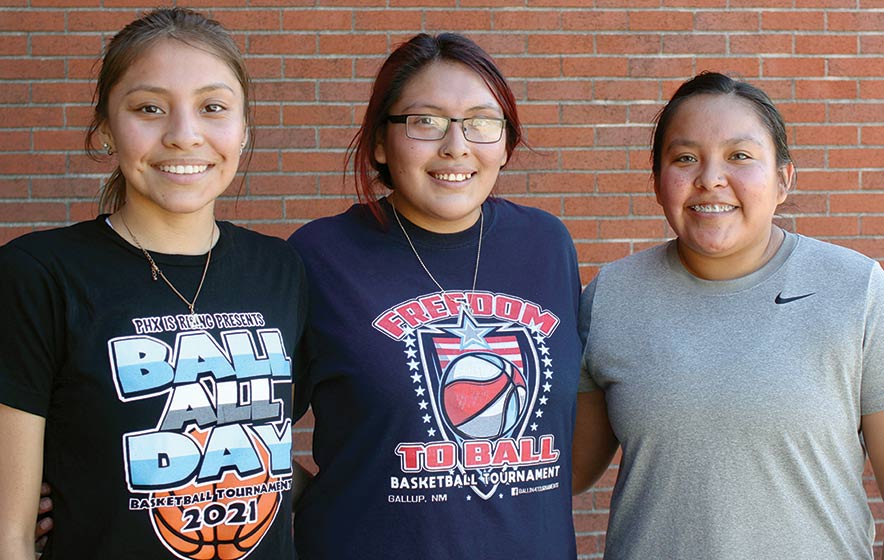 Growing up in Navajo culture in Utah, Quiana Dishface remembers learning to play basketball on dirt.

“We didn’t really have a court,” she said, “but it was basketball.”

She grew passionate for the game after taking it up in the fifth grade.

First playing at home with her family, and later at a high school off the reservation, she never thought she’d one day be practicing more than 2,000 miles away in the city where basketball was invented.

But that’s just what Dishface was doing on a fall afternoon at Springfield Technical Community College.

Dribbling the ball, she zig-zagged back and forth on the court in the STCC gymnasium, working through drills with her teammates.

While Dishface hails from Utah, Natonabah and Jim grew up in the New Mexico portion of the Navajo Reservation.

“We are fortunate to have a very strong recruiting class coming in for women’s basketball,” said Ed Guczek, STCC women’s basketball coach. “I am very proud to have such a diverse representation on our roster representing our school.

“When I recruit,” he said, “I emphasize the cultural appreciation that our school has along with strength in education.”
Guczek recruited players from Utah, Washington, Nevada, South Carolina, New Mexico and New York. He planned to add players from the greater Springfield area during fall tryouts.

Guczek noted it’s unusual for a community college to build a team with players from across the United States. He is proud that he can offer them not only a chance to play competitively but an opportunity to enroll at a college with strong educational programs offered at an affordable price.

“When I recruit, I recruit not only for their basketball skills, but also I ask what are their goals? What are their aspirations? Academically, the school is able to meet those goals and aspirations,” Guczek said.

The three players from the Navajo Nation said they chose STCC because of the strength of its programs and the. opportunity to see another part of the country.

The three new recruits are living together in Springfield, about 20 minutes from campus, and spend their time focusing on academics and basketball.

Dishface loves biology, and dreams of one day owning an aquarium. She hopes visitors to her aquarium can make connections with the creatures they see.

“In Samoan culture, in Hawaiian culture, they have attachments to animals, which are sacred beings,” Dishface said. “In the Navajo culture, we see animals as our protectors, guides and family.
“Our creator is something different,” she said. “But our animals are the foundation for what we know today. Without our connection with animals, we wouldn’t know much about our world and how to survive.”

Coach Guczek noted that Dishface is knowledgeable about her culture and her heritage and Princeton University asked her to speak.

STCC’s emphasis on diversity and respect of cultures made it easier for Dishface, Natonabah and Jim to enroll at the community college far from their home.

“I went to school off the reservation,” she said. “No one sat by me. No one liked me. When I joined the basketball team, the parents were asking, ‘How come my daughter was playing with someone of color?’

“Here, you’re welcomed,” she said. “I see different types of people. A variety of different cultures and heritages coming in together. It feels like home. It feels welcoming, so I enjoy it.”
Her teammates from the Southwest agree, saying they feel accepted at STCC. Natonabah and Jim hope to receive degrees in nursing.

“Where I’m from, they are all Native Americans,” Jim said. “There are so many different ethnicities here. I think it’s very nice. I get to meet new people and learn new things about other cultures.”
The three players from the Navajo Nation have noticed other contrasts between New England and the Southwest.

“Back home we had to drive one or two hours just to get to town for groceries, but here it’s only about a five-minute drive,” Natonabah said.

They’re also getting used to the climate. While they haven’t yet experienced a New England winter, they’ve marveled at the moisture and foliage.

“It’s really different from back home. It’s not dry,” said Natonabah. “It’s really green and a lot of moisture. When it was raining, a girl thought it was weird that we were just looking at the rain, because we don’t get much rain back home.”