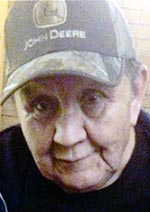 Leemer is preceded in death by his parents, Palmer and Inez Etsitty; and brother, Edison Etsitty. Silver Creek Mortuary was in charge of arrangements.

GREASEWOOD SPRINGS, Ariz. — Emerson “Emer” Yazzie was a lifelong resident and silversmith of Greasewood Springs, Arizona. He passed away unexpectedly on Oct. 3, 2020, at the age of 64, in his home.

Emerson was born at Sage Memorial Hospital in Ganado, Arizona, on March 9, 1956, to Rose and Clarence Yazzie. His maternal clan is Ma’ii deeshgiizhinii (Coyote Pass Clan), born for Kinyaa’áanii (Towering House Clan). Emerson attended Greasewood Boarding School and Snowflake Union High School. From a young age, he learned traditional Navajo and inlay silversmith work, and his jewelry was showcased and sold at stores in Winslow, Dilkon, and other jewelry merchants nationwide.

Emerson was a social and active person in his community and was always willing to help those in need. He enjoyed family, silversmith work, being involved in community activities, and was an advocate for local families. He enjoyed helping others, especially with traditional Navajo events and ceremonies.

A graveside service with limited attendance will be held for Emerson at the Greasewood community cemetery. Summit Funeral Home made the final arrangements. Donations will be accepted through Zelle under Nathan Yazzie (Chase account, 623-800-1594). Greasewood Chapter House is also accepting donations on behalf of the family.

The family would like to express their gratitude during this time of sorrow.