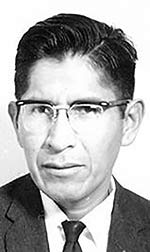 Rev. Redhouse was born April 23, 1925, in Teec Nos Pos, to Hosteen and Marie Redhouse. He was Bit’ahnii (Under His Cover Clan), born for Kinlichíi’nii (Red House People Clan). The Lord called his faithful servant to his eternal home on Sept. 5, 2019.

After the service, a reception will take place at the Piedra Vista High School Commons (5700 College Blvd., 2.7 miles east of the Pinion Hills Community Church) in Farmington. 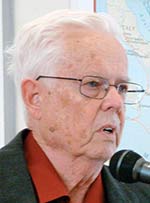 A lifelong scientist, educator, and minister, his career path allowed him to combine both his passion for science and his faith, through agricultural mission work in Taiwan and Liberia in the 1970s. However, it was his work in the Navajo community of Arizona in the early 1960s that had the most impact on him and his family.

Beloved by a huge extended family of his former students and parishioners, especially in his role as a “quirky mad scientist,” he is survived by his loving wife of 58 years, Lavonne Slusher; daughters, Karen Delcampe (Jason), Gwen Johnson (Loren), and Idah Burnside (Virgil); sons, Michael Slusher (Laurie) and Donn Slusher; and 12 grandchildren.

In lieu of flowers, the family asks that donations be made to the Santa Fe Animal Shelter and Humane Society (100 Caja del Rio Rd., Santa Fe, NM 87507) in appreciation for the dog that adopted him, “Buddy.” 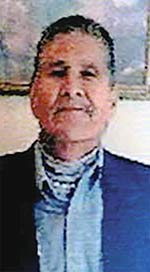 Alex attended Shiprock High School and worked various jobs, including pipeline, construction and was very active coaching basketball in area tournaments. He was a skilled artist and loved horses.

Shawn received his GED and did labor work. He enjoyed drawing, reading and writing his own poems.

Shawn is preceded in death by his sister, Andrea S.B. Bitsoie.

A potluck reception will take place at the Leupp Nazarene Church following services.

TO’HAJIILEE, N.M. — Funeral services for Timothy Monte, 44, of Albuquerque, will be held Friday, Sept. 13, at 10 a.m. at the Canoncito Miracle Church of God in To’hajiilee, New Mexico, with Ben Harry officiating.

Timothy enjoyed softball, hunting, landscaping, and spending time with his children and grandchildren.

Timothy is preceded in death by his brother, Melvin Monte.

A reception will take place at the Desidero Center in To’hajiilee, following services.

Daniels Family Funeral Services—Alameda Mortuary is in charge of arrangements.

Edwin was born July 10, 1935, in Ganado, Arizona, into the Honágháahnii (One-walks-around Clan), born for Táchii’nii (Red Running Into the Water People Clan). He passed away Sept. 4, 2019, in Mesa, Arizona.

Edwin attended Ganado Mission High School, Arizona State University and served in the U.S. Army. He worked for the City of Gallup as a union member of IBEW No. 16 New Mexico, and retired as a journeyman lineman from Navajo Tribal Utility Authority in Fort Defiance. Edwin enjoyed playing his guitar in local bands, gospel music and coached numerous women basketball teams in Window Rock.

Pallbearers will be family members and friends.

A reception will take place at the American Legion Hall in Fountain Hills, following services.

Messenger Fountain Hills Chapel is in charge of arrangements.

Marie graduated from Wingate High School in 1984 and was employed as an accountant at the U.S. Indian Health Service Area Office. She enjoyed working, visiting family members and spending time with her grandchildren.