Begaye to chapter officials: Grow up! 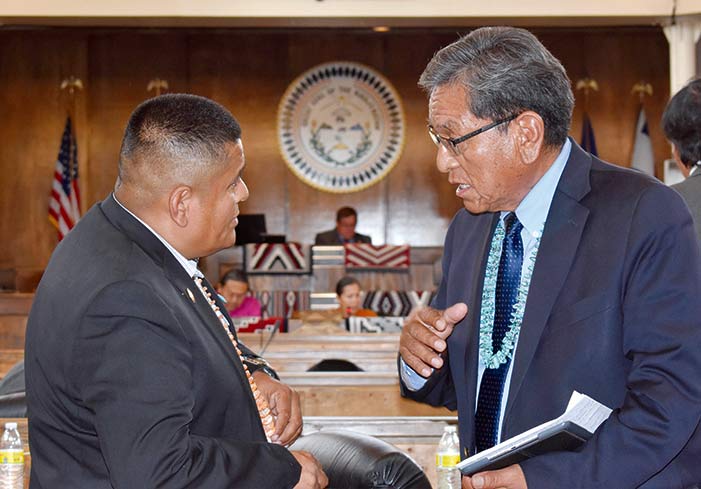 President Russell Begaye called out chapter officials in his state of the nation address before the Navajo Nation Council Monday, stressing that they have to be accountable to their people.

“How long are the chapters going to be treated like children?” Begaye asked. “You guys are adults, grown men and women. Stop fighting and stop mismanaging the people’s money and make good decisions on behalf of your people. You were elected because people placed their faith and trust in you. It’s time to grow up.”

The chiding struck some observers as ironic. They noted Begaye might consider this kind of tough-talk approach with his daughter, former legal counsel Karis Begaye, recently charged with DWI and totaling a Navajo Nation vehicle. Tribal investigators are now demanding reimbursement for the vehicle.

Begaye also said his administration is making a “paradigm shift” on the Nation from being dependent on natural resources like coal, oil and power plants to being technically driven. He cited additive manufacturing, 3D printing, building high-tech gadgets, robotics, and drones as areas for growth and new industry.

Begaye, who is running for a second term, also spoke of opportunities in the solar, wind, and tourism sectors.

Begaye expressed strong opposition to the recently proposed reorganization plan put forth by the Bureau of Indian Affairs, which he said would eliminate the Navajo region, split the Nation into two regions, violate the federal government’s treaty promises, and jeopardize sovereignty, all without proper consultation.

Begaye and his team are working at the congressional level to “right a wrong” when it comes to the Radiation Exposure Compensation Act, and compensate those uranium miners who have been exposed to radiation, but haven’t been compensated by the limited original provisions of RECA, enacted in 1990.