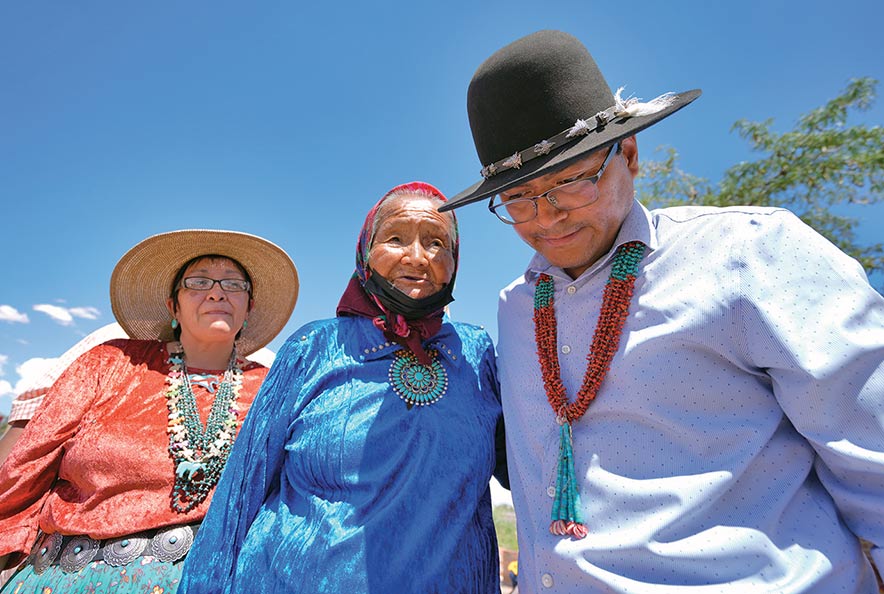 Buu Van Nygren can imagine himself showing up in Washington, D.C., and people whispering that he’s the Navajo Nation president.

He imagines being there representing Diné Bikéyah and its people.

“The way I dress, everything – trying not to forget who we are,” said Nygren, the candidate running against the incumbent president.

“And as president, you’ve got to be able to get going no matter the situation because one of the things I’ve campaigned on is a working president,” he said in an interview at a campaign stop at Tuba City flea market on Friday afternoon.

“We’re not the U.S. president,” he said, “we’re not the governor of Arizona. The president of the Navajo Nation needs to be at the chapter meetings and talk with the Council delegates and work with local leadership because all those issues are very prevalent.”

Nygren added that one of the reasons he wears an open crown hat with a flat brim is to honor the Diné elders – the men who wore them with a feather, a reminder of generations past.

He said elders often tell him their fathers wore a hat just like his and tell a story about life in the old days.

“A lot of elders appreciate that,” Nygren said. “A lot of the youth, I noticed, are wearing the (open crown) hat, and their tsiiyéél are starting to come out.

He added that when former presidential hopeful Joe Shirley Jr. selected him as his running mate in 2018, he wore an open crown hat too.

Nygren and his running mate, Richelle Montoya, are candidates of change for a better, fairer and brighter future for the Diné.

He said one of the three things he often talks about is competency because people ask how he’ll get items on his agenda done.

“It’s a big list,” Nygren said. “It’s going to take three things to get a lot of those things done (and) you’ve got to know what you’re doing, and you surround yourself with people who know what they’re doing.”

The second is compassion.

Nygren says leaders need to have the heart to serve their community because no amount of money nor resources will motivate an individual to go above and beyond for the people.

“As elected people, you’re there to serve,” Nygren explained. “People vote for you because they want government services more efficient, more effective, whether it’s youth services, veterans, elderly, or economic development plan – whatever the sector is.”

The third is teamwork, Nygren said, because the government is complex, and one person can get the work done alone.

One of Nygren’s goals should he take office next year is working with the upcoming 25th Navajo Nation Council members weekly to ensure hand-in-hand contact.

“All 24 plus the president and vice president, we have the same issues across the board,” Nygren said. “So, there shouldn’t be any discrepancies.

“As president, using those three things – competency, compassion, teamwork – really navigating and that’s the job of the president,” he said, “to get legislation passed that are more aggressive.”

“But none of that will ever happen if you get a president that doesn’t have those things,” Nygren explained. “When we switched over to the three-branch government, things really stalled, from 1989 to now. Everything seems so difficult to get done.”

Now, he better understands what the delegates face daily and why the leadership at each of the 110 chapters and the tribe’s division directors are struggling.

“So, when I get into the position of the president, I understand a lot of the struggles that happen from those positions,” Nygren added. “As president, I want to make things easier so we can get things done.”