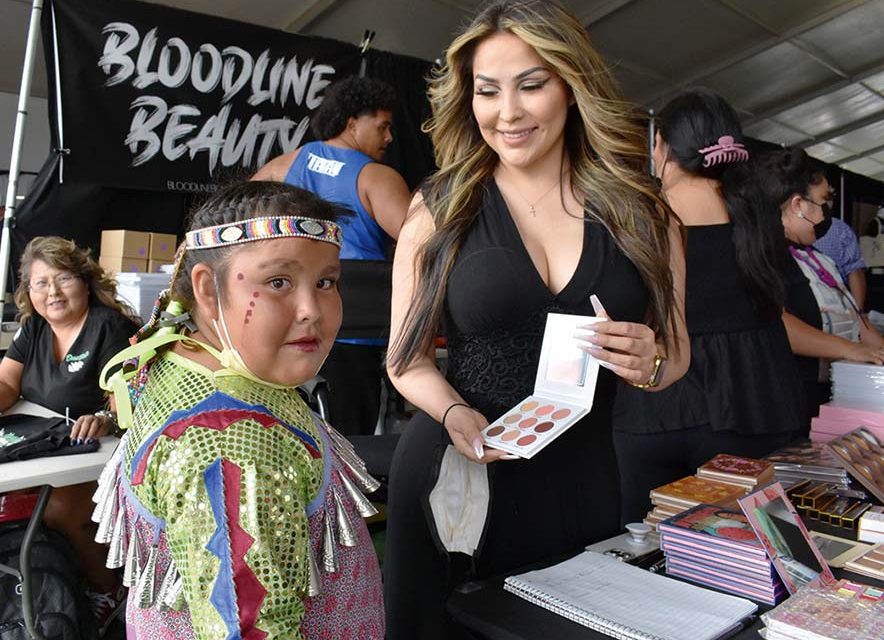 Diné make-up artist, model and Bloodline Beauty brand owner Deanne Vanwinkle believes every woman in the world is beautiful in their own way.

“I truly believe every person has something beautiful about them,” she said. “When it comes to the outer part of us, all of us have a unique something and that’s what makes us beautiful.”

Vanwinkle said as a Native American when she was thinking of a name for her business, she wanted something powerful, strong and meaningful that all women could identify with.

“Bloodline, I love it because it basically means where you come from and who you are as a person,” she said. “I feel like your culture and heritage is what you are. We all have our beauty, inside and out.”

That universal theme is precisely why her Bloodline Beauty make-up line and merchandise have taken off the way they have, she believes.

Vanwinkle sees things from an international perspective, which is largely due to her 14 years of experience working as a make-up artist in Las Vegas, Nevada.

“I do all these women’s makeup and every background has something different and unique about their beauty and it just amazes me,” she said. “I always compliment them, because every woman has something that stands out to me.”

She said beauty is a big part of any woman’s life. However, in a place like Las Vegas, people are coming to have a good time and want to look their best.

“You get clients from all over the world,” she said. “A lot of people come to Vegas to go to a show, a bachelorette party, weddings or just going out. Everyone wants their hair and makeup done.”

Although Vanwinkle says she always had a passion for make-up, her experience as a model in her twenties took that to another level.

“I actually started modeling on the reservation,” she said.

Early on, Vanwinkle won a contest to be on the cover of a national Native entertainment magazine.

“After that, I started doing my own posters, calendars, and modeling for magazines,” she said.

Vanwinkle is the daughter of Cindy June Natay, from Spider Rock, and Dean Vanwinkle, from Nazlini.

During Vanwinkle’s childhood, her family moved around to several states for her father’s work as a civil engineer, including California, Utah, Kansas and Arizona, where she went to high school and then beauty school in Tucson.

However, her summers growing up were always spent in Chinle, she said.

“We were just rez kids in the summer going to the Canyon (de Chelly),” she said. “It’s so peaceful and pretty. It’s like nowhere else. I’ll never forget those childhood memories.”

Vanwinkle’s grandfather, Francis Etsitty, was a medicine man, she said.

Her other grandfather was the famed Navajo singer Ed Lee Natay.

“He’s kind of a legend on the Navajo Reservation,” she said.

In her mid-twenties, she moved back to the reservation to become a care provider to her grandmother, Madeline Etsitty.

After her grandmother passed on, she moved to Las Vegas with her then boyfriend and got her esthetician’s license there.

“From there, I just started working in the casinos,” said Vanwinkle. “I was doing facials, body treatments, makeup and skin care.”

Eventually, Vanwinkle was hired at Treasure Island Hotel/Casino and then the prestigious Wynn Hotel/Casino on the Las Vegas Strip as a full-time makeup artist for the casino salons and spas.

However, when all of that work dried up at the onset of COVID-19 pandemic, everyone was laid off, she said.

“That’s when I made the decision, I’m just going to work for myself,” she said.

With all of her contacts, she took on individual clients, did make-up and hair for celebrities and was featured on reality TV shows.

“I was on Bravo TV doing make-up for Jen Shaw for ‘Real Housewives of Salt Lake City’ on the episode called ‘When I Come to Vegas,’” she said. “We all got along really well. We all had fun.”

Having been in the beauty industry for more than a decade, she decided that the lull of the pandemic offered the perfect time to fulfill her dream of starting her own make-up line.

Vanwinkle did the research, found a make-up manufacturer and distributor and soon got started developing products and transforming her vision into real life.

She also worked with celebrities and social media influencers to help promote her products.

“I started reaching out to them and sending my products to them,” she said.

Three years later her business is booming and most of Vanwinkle’s work is done from her home in Las Vegas, which she loves.

“I never have to leave my house,” she said. “I just do everything from home.”

This is especially important to her since she is raising her 16-year-old son as a single mother, she said.

“Becoming a mom completely changed my life,” she said. “I feel like when you have kids it gives you a direction in life, to want better for your future because it’s not just you – you’re building a future for your child, too.”

In that regard, Vanwinkle wants to be an advocate and a role model for other single mothers, she said.

“Being a single mom is another job itself,” she said. “There’s a lot of women out there like me who don’t think it’s possible to do something like what I’m doing. I’m like, it is possible.”

Now, Vanwinkle’s modeling falls under her own business as the “face of Bloodline Beauty,” she said, which appears on many of the products available in her online store.

With her bombshell style and self-effacing persona, Vanwinkle is also known for her engaging TikTok videos, many with a humorous twist, that have become wildly successful in driving Bloodline Beauty’s sales.

She said while Instagram used to be really great, it has become stagnant.

“It’s boring,” she said. “When TikTok came, it took me a long time to get into it. I finally got the courage to go live on TikTok and the first night I went on, I had so many sales, I was literally packing orders for hours and hours.

“It just blew me away,” she said. “I thought if I would have known this, I would have done this a long time ago.”

“Make-up is literally my whole life – I wake up and go to sleep with it,” she said. “It’s always around me. It’s always what I do.”

Bloodline Beauty is all about affordability, deals and sales because she herself is always cost conscious, she said.

“I’m very stingy with my money actually,” said Vanwinkle. “They say the rich stay rich because they’re cheap. That’s what I am. I know a lot of people can relate to me. People always thank me for always doing deals.”

Vanwinkle’s advice to those who are just getting into make-up is to learn one thing at a time.

“Learn how to master your brows first,” she said. “Then learn how to contour your face.

She highly recommends delving into “YouTube” tutorial videos to learn the craft of make-up artistry.

“They say YouTube is ‘YouTube University,’” chuckled Vanwinkle. “They call it the school of hard knocks. I literally learned everything on there. I built my own website by watching a ton of videos.”

Vanwinkle also advises people that before they apply make-up, attention needs to be paid to their skin care.

“You always want to take care of your skin before anything else,” she said. “When you have beautiful skin, the make-up lays on top of the skin beautifully.”

Skin cleansing, exfoliating and wearing moisturizer and sunscreen are her top skin-care tips.

“If you don’t wear sunscreen, your skin tends to age faster,” she said. “I also like to add rosehip oil or any kind of skin oil into my moisturizers, which is very replenishing.”

Self-care is also an important part of any beauty regimen, she says, including eating right and exercise.

“They say you are what you eat,” she said. “You need to be eating all of the pyramid foods. Stay away from fast foods.”

The radiant yet down-to-earth beauty says that even she sometimes feels insecure about her appearance.

“I try to feel confident, I try to love myself, because that’s what it really comes down to,” said Vanwinkle. “If you don’t know how to love yourself, you really have to learn how and it’s not going to happen overnight.”

Vanwinkle says while she likes to go home to visit the reservation, there aren’t many economic opportunities there for what she is doing.

However, she does do marketing and outreach events like taking part in the recent Navajo Nation Fair parade and small business market.

She said when she first started her make-up line, her product and packaging focus was mostly on Native American themes, but now she’s branching out to be all-inclusive of all cultures and backgrounds.

“I feel like I made a name for myself in the Native world, so now I want all women to wear my products,” she said.

Vanwinkle’s next dream is to have her beauty line represented in a department store that has global reach.

“For everybody who’s selling a product, that’s the ultimate goal –to be in a large chain selling in the U.S. or worldwide,” she said.